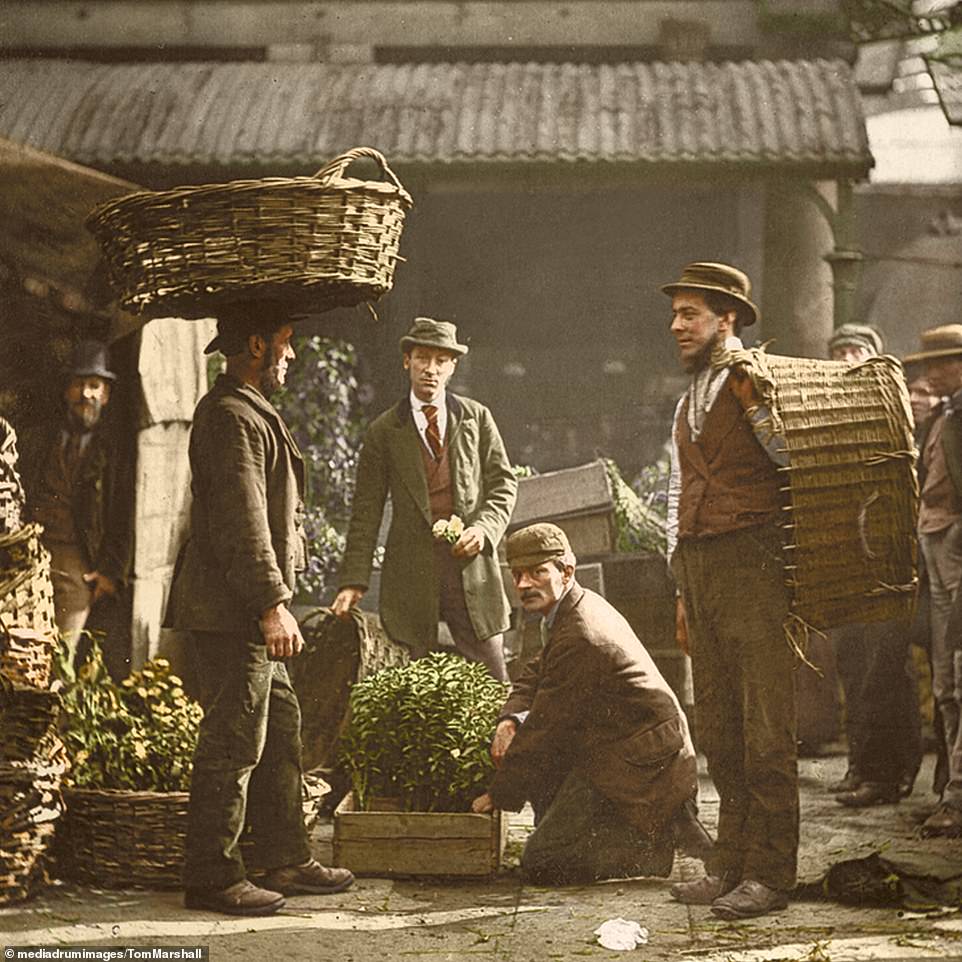 Coloured photographs taken in the 1870s have brought the streets of Victorian London to life.

The photographs, coloured by photo colourist and model maker Tom Marshall, appeared in the London publication “Street Life” in 1876 and 1877 and depict the lives of those residing in the capital’s poverty ring.

John Thomson shot these photos 150 years ago, and they demonstrate the enormous range of jobs individuals went on to make ends meet.

One disturbing picture depicts a woman sitting on the sidewalk. She had been residing with her son-in-law, but after being evicted, she was left with no choice but to live penniless on the streets with her son.

In one image, posters are shown using the “wall working” method of advertising, which involved hanging them on a wall or fence along a busy street.

According to Tom, “in this case, the boards covered with thin notes are delivered to Cannon [sitting on the right], who hands them up in the morning and receives roughly a shilling weekly for each board.”

The outcome is that the wall workers property generates a return that is so meagre that it hardly makes up for the effort put into managing it.

In a another picture, a street doctor is seen dispensing ointments and cough drops.

The man in the picture spent nine months at St Thomas’s Hospital after being given an atrophy diagnosis, which is a progressive loss of muscle and nerve tissue, according to Street Life magazine.

Throughout his medical care, he was transferred between hospitals.

He decided to start his own business and made a living by selling medicines on the streets of London after purchasing ointment from another individual.

The magazine stated, “He was initially a car-driver employed by a firm in the city, but he had to leave this job due to declining sight.

According to an interview with him in the magazine, “I find the majority of my customers in the street, but I am now building a private connexion at home of people from all parts of London.”

Other photographs depict Italian street musicians playing their instruments to make money, and another shows a boot black, or shoe shiner, washing a man’s shoes in the street as part of an unlawful business.

One image shows two guys standing on a pier with a massive factory in the background.

They also provide insight into the working life of those who worked in regulated trades.

In another scene, a French ticket painter who created and executed posters for London’s streets is shown selling goods in a street sale that resembles the more contemporary marketplaces of today.

I’ve been professionally coloring pictures for eight years, but I first started playing around with photo-editing software as a kid, he claimed.

“I made the decision one day to see whether I could colorize images for a living. I started with those of friends and family, and it grew.”