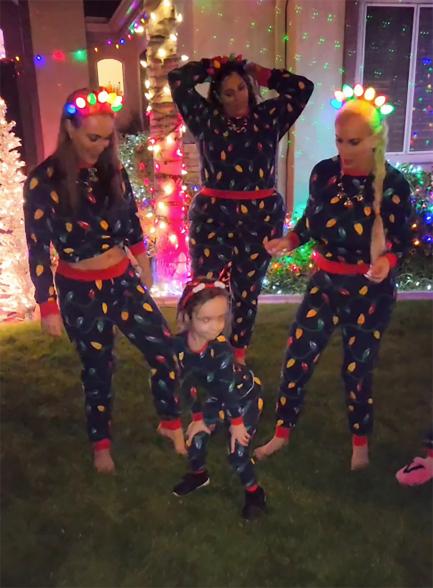 Before Instagram critics could criticize a video of her daughter Chanel twerking in Christmas jammies, Coco Austin responded.

The actress posted the footage with the phrase “She loves to joke” on Monday.

The “Ice Loves Coco” alumna added that she and her family were “in the middle of” filming a TikTok in the front yard when her seven-year-old son ran out “to bust a move and make [them] laugh.”

Austin included hashtags comparing her and Ice-child T’s to Tina Belcher from “Bob’s Burgers,” who is well-known for performing the same dance on the Adult Swim program.

She said, “You must cherish family time!”

In the comments area, Instagram users voiced a variety of viewpoints regarding Austin’s music video, “Bust a Move” by Young MC.

One follower said, “Not a nice look at all,” while another added, “SMH just whyyyy, this is not acceptable!”

Others defended the post, with many applauding Chanel’s “perfect” impersonation of the animated character.

“People must brighten up” “She’s wearing Christmas pajamas while barely facing the camera, and she’s clearly emulating that girl from Bob’s Burgers,” a supporter commented.

Austin frequently claps back at the Instagram parenting police.

A third concurred, writing, “I adore it!” She is really cute! She is a fantastic Tina Belcher.”

Since adopting Chanel in 2015, Austin has received her fair share of internet abuse, with the model telling Tamron Hall last month that she is constantly “under a microscope.”

The former reality star, who cried throughout the November interview, stated, “You don’t hear the positive, you just hear the negative…. You only want a little bit of love and respect from others.

»Coco Austin defends her daughter’s twerking in a Christmas video by saying, “She enjoys joking.”«