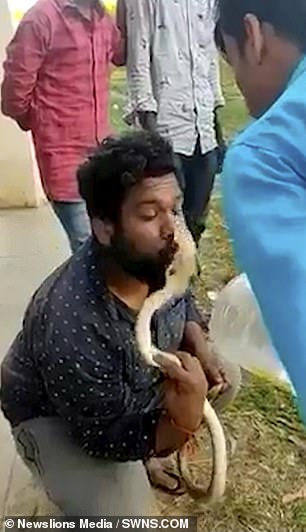 When an Indian snake catcher attempted to kiss a cobra, the poisonous snake rushed at his face and bit him on the lips.

The guy looked to be attempting to pose for a picture when the deadly snake bit him, according to surveillance footage of the event.

A second guy is shown holding the snake down by its tail while the snake-catcher is seen kissing the back of its hood, which is how cobras scare predators by making themselves seem larger.

The snake, however, unexpectedly twists its neck around and bites the guy in the face with fangs that release a very lethal poison that may kill an elephant, shocking the victim.

Thankfully, the event occurred on Saturday in Shivamogga region of southern India. The guy was seen clutching his face after the bite as he reacted in horror to the assault.

Whether the snake injected any of its poison into the guy remained unknown. If it had, he would have needed immediate medical attention following the occurrence.

Shortly after, the snake was let free, and in the video, you can see it being flung away by another guy before slithering into the grass.

One of the “Big Four” snakes in India, or the four species that account for the majority of fatal snakebites there, is the cobra. They may also be found in Nepal, Bhutan, Sri Lanka, Pakistan, and Bangladesh.

The cobra is adored in Hindu mythology and culture, and snake charmers are often seen “playing” with them. They are perhaps best known for ‘hypnotizing’ the snakes using a device called a pungi.

A snake charmer and a cobra execute other actions with the reptiles, some of which seem to be threatening.

But since a cobra’s venom includes a potent post-synaptic neurotoxic (destructive to nerve tissues) and cardiotoxin, doing so carries a significant level of danger (which causes muscle damage, particularly to the heart).

Cobra venom, if left untreated, may harm nerves, paralyze muscles, and, in the worst instances, cause cardiac arrest or respiratory failure.

The quantity of venom released by an Indian Cobra bite determines the death rate, which varies from case to case.

One research found that the fatality rate might range between 20 and 30 percent, although another found that nine percent of individuals who received prompt medical attention perished.

»Cobra attacks Indian snake-catcher after he kissed it«