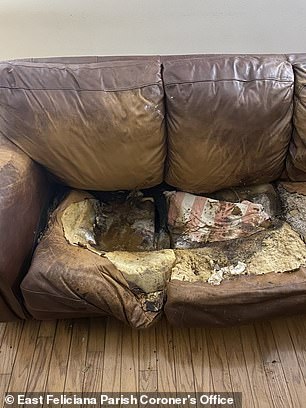 A colleague of a Louisiana man accused of abandoning his 36-year-old disabled daughter to die on the living room couch has said he is ‘shocked’ by the horrific allegations.

She suffered from Locked-in Syndrome, leaving her unable to move her muscles, and her parents were her primary caregivers.

She was found dead, fused to a living room couch, and covered in insects and her own bodily fluids.

John Potts, program director of the Baton Rouge Civil War Roundtable – where Clay Fletcher worked – said he was stunned by the news.

Asked by KTAL News for his reaction, Potts replied: ‘Shock. Because it doesn’t match with my experience of him.

‘He’s completely different than what you would expect of someone like that to be.’

Potts said: ‘The details are horrific, there is no doubt about that, and I can’t conceive of how something like that can even happen.’

Lacey Fletcher was found partially naked, sitting upright and submerged in a hole in a couch covered from head to toe in urine, liquid feces and insect bites.

‘The scene was sickening,’ he told DailyMail.com.

‘I’ve seen some horrible things in my life but nothing like this.’

Bickham, a medical worker since the 1970s, said that she had bed sores that went all the way down to her bone.

Neighbors and friends said they never knew the couple had a daughter.

‘He mentioned that she passed in January, and that’s all I know of that,’ said Potts.

Lacey suffered from Locked-in Syndrome, a rare neurological disorder characterized by complete paralysis of voluntary muscles, except for those that control the eyes.

Police arrived at the ranch-style home in the suburb north of Baton Rouge on January 3 after the parents called 911 because Lacey wasn’t breathing, prosecutors said.

The parents were supposed to be the girl’s care providers, but Bickham said she had not been to a physician in 20 years.

‘It’s unconscionable, something you make horror movies about,’ he said.

When he arrived at the home, he described the stench being so bad that, ‘it would almost run you out of the house.’

He told DailyMail.com that he knew it was a ‘potential crime scene,’ and immediately called his detective.

‘The parents were in the kitchen. They did not have an explanation,’ he said.

He ruled her death a homicide and cause of death as medical neglect.

Sheila Fletcher has worked as a police and court clerk in Baker and more recently as an assistant to the city prosecutor in Zachary, report said.

According to her LinkedIn page, Sheila was a Slaughter official who  resigned her post on the town’s Board of Aldermen on January 24, three weeks after her daughter’s death. She served for four years, most recently as mayor pro team.

State business filings show Clay Fletcher is an officer of the nonprofit Baton Rouge Civil War Roundtable, which has a mission ‘to educate and foster an appreciation for the sacrifices made by all during the Civil War.’

The couple’s lawyer, Steven Moore, was unavailable for comment on Thursday when DailyMail.com contacted him.

However, on Wednesday, Moore issued a statement on his client’s behalf, BPProud reported.

‘They don’t want to relive the pain of losing a child through the media.

‘They have been through a lot of heartache over the years. Anyone who had lost a child knows what it’s like,’ Moore said.

On Monday, Bickham will  present the case to a grand jury, in the hopes of charging the parents in the death of their daughter.

‘I probably won’t even have to open my mouth – the pictures will show it,’ Bickham said.

He added: ‘The jurors are storekeepers, farmers many have never been exposed to this stuff so I asked that a medical team be outside the courtroom.’

District Attorney Sam D’Aquilla told the DailyMail.com that the parents were never  taken into custody because they’re not considered flight risks.

A 12-person jury will be in a closed session at the court house in Clinton, where they will decide on charges of manslaughter, negligent homicide or second-degree murder, he said.

‘Negligent homicide is zero to five years; manslaughter is zero to 40 years and second-degree is life in prison. I will ask for second-degree because they didn’t do what they were supposed to do,’ he said.

D’Aquilla confirmed to DailyMail.com that Lacey’s parents were her primary caretakers, and that she did not have an aide.

‘We don’t treat animals or neglect our animals in that way. If you have an animal in that condition you take them to the vet,’ he said.

D’Aquilla told the DailyMail.com that Lacey had some issues that she went to see a psychiatrist for back in 1999 or early 2000s and that she had been anti-social.

‘If you are not capable of providing the care than get help,’ he said. ‘We want people to know that if you are a caregiver of someone you need to pay attention is it important for neighbors and the community to look out for each other. We hope this never happens again.’

According to a 2020 U.S. census, 882 people live in Slaughter, a town in East Feliciana Parish.

Many of the homes are spread out over acres, so when news of Lacey’s death broke many in the community were stunned with some having no idea that Clay and Shelia Fletcher even had a daughter.

‘They are appalled,’ said the coroner who spoke to some of the neighbors. ‘Some of these people were churchgoing friends who had no idea that there was another person in that house.