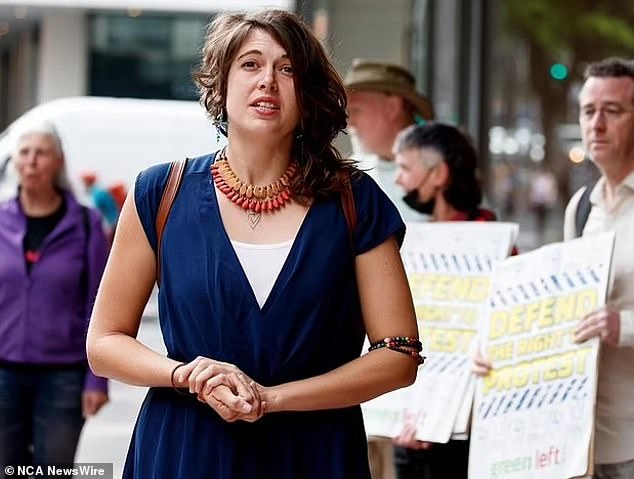 A climate activist who stopped the Sydney Harbour Bridge has gathered more than a hundred supporters outside of court as she prepares to appeal her jail sentence.

Deanna “Violet” Coco was sentenced to jail earlier this month for a minimum of eight months after pleading guilty to seven offences, including having a flashing light distress signal in a public area and interfering with a bridge’s safe functioning.

Immediately after being arrested, the 31-year-old requested release based on an appeal, but Magistrate Allison Hawkins dismissed the request.

More than 100 protesters gathered outside the Downing Center on Tuesday in anticipation of the application’s upcoming hearing in the NSW District Court.

Numerous unions, indigenous campaigners, and Greens senator David Shoebridge were among the speakers during the demonstration.

The government has granted fossil fuel businesses handouts totaling $500,000, according to Mr. Shoebridge.

‘The offense isn’t protest. Government is where the criminality is. They need to be in court rather than activists.

The audience was informed by Maritime Union member Paul Keating that “all working people’s problems are interrelated.”

The rules impacting Coco, according to him, are the “most totalitarian legislation” the nation has ever seen.

Senator David Shoebridge of the Green Party spoke during the demonstration.

On Tuesday morning, the issue was briefly raised in court when a fan raised an Aboriginal flag at the back of the room.

According to court records, Coco purposely obstructed a lane on the Cahill Expressway on the Sydney Harbour Bridge during rush hour on April 13 around 8:30 a.m.

She stepped atop the vehicle that was delaying traffic, holding a lighted emergency flare, and livestreamed the incident.

After 25 minutes, police came and forcefully removed the protestors off the well-known Sydney landmark, with Coco putting up a fight to avoid being taken into custody.

Coco “was lying limp,” according to court filings, which forced police officers to drag her to the police car.

Following the announcement of Coco’s sentencing earlier this month, climate campaigners were incensed.

The demonstration prevented a NSW Ambulance from responding to an emergency after it activated its lights and sirens.

The records indicated that the steps taken today not only seriously disrupted traffic during peak hours but also prevented an ambulance from responding to an emergency while flashing lights and sirens because it was unable to maneuver through the thicker, more congested traffic.

It is possible for a death to ensue from this burden on a vital emergency service.

A “salient fact” in Coco’s case, according to defense attorney Mark Davis, was that she only obstructed one lane of the Sydney Harbour Bridge when there were five. This was stated in court on December 2 during her sentence.

In other words, there was no indication that there was a backlog of traffic, even if the traffic may have still been flowing.

According to testimony given in court, Coco had “severe worry regarding climate change” and that her actions were driven by personal feelings since her boyfriend had been detained for staging a similar protest on a football field.

According to Mr. Davis, his client committed the crime because he was in a “high state of emotion” and would not have done so otherwise.

‘Normal people of the community going to work and going about their everyday business are not entitled to being interrupted because she’s in a high state of emotion,’ Ms. Hawkins questioned Mr. Davis’ defense.

The defense attorney said that among Coco’s generation, fear over climate change was “the most pervasive anxiety.”

According to Mr. Davis, these kinds of activities may be the result of an overwhelming feeling of impending doom, a perception that they aren’t being heard and that the government isn’t doing enough to stop them.

Ms. Hawkins concluded that Coco’s criminal behavior had a “intended element of preparation.”

The magistrate said, “You knew this was against the law, you knew you would be arrested, and you knew there would be repercussions.”

Ms. Hawkins informed Coco that she neglected to consider the other individuals she had an impact on and caused a “entire city to suffer” as a result of her “emotional response.”

She said that the community and the court should both express their disapproval of the behavior of the 31-year-old.

When you pull such infantile tricks, you harm your cause. Why should your egotistical emotional behavior interfere with them? stated Ms. Hawkins.

You are a criminal, not a political prisoner.

Coco was found guilty and given a 15-month jail term with an eight-month non-parole period.

Before being detained and brought out of the court by two corrective services officers, she gave her mother and a friend a hug.

While waiting for the appeal to be heard, her legal representative promptly filed a sentencing appeal and showed up before the same judge to request bail.

Bail was turned down.

Coco is a frequent demonstrator and a part of Extinction Rebellion and Fireproof Australia, two organizations that support environmental activism.

She had previously been in court for holding a demonstration against a mining activity while bare-chested and for torching a stroller in front of Parliament.