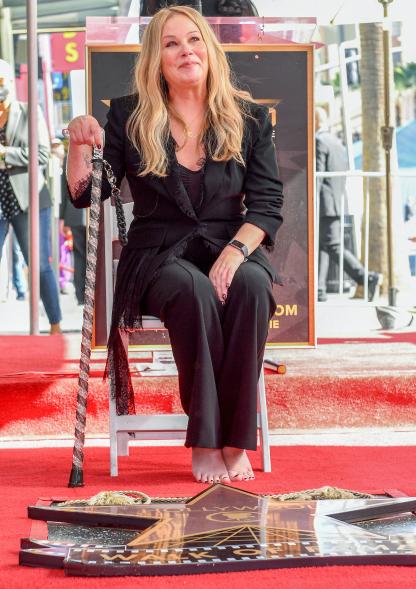 Christina Applegate states that she utilizes dark humor to cope with her “very difficult” MS diagnosis.

Applegate remarked on Friday’s episode of “The Kelly Clarkson Show”: “My humor shield keeps me okay, but of course, on the insides, you feel the things, and I do it to sort of deflect and also make people not be terrified to be around me.”

She said, “You know, I want people to feel at ease when they see me as a disabled person. That we are able to joke about it”

As an illustration, Applegate said that she wrote a humorous Christmas song titled “Disabey Baby” about her Multiple Sclerosis, with the following lyrics: “Hurry down the chimney tonight. Because my wheelchair will not fit down it.”

The 51-year-old “Dead To Me” actress acknowledged that despite the obstacles she was facing, she was determined to complete the Netflix series

She added, “After being diagnosed with MS last year and experiencing what it did to my body, mind, spirit, and everything else, of course I didn’t want to be around anyone or discuss it, but I had to go to work.”

She noted that she was not “forced” to go to work, but was aware that the program had to be completed.

It felt like a member of my family. Everyone there, including Linda Cartalini and Liz Feldman, is my family,” she remarked. “There is a story that we were unable to complete. And I worked as hard as I could to get through it, so it was quite challenging.”

After completing the series, Applegate took a short break before reentering the limelight.

She remarked, “I went to sleep for a few months, and then all of a sudden I had to get up and be this person.” People had viewed me as a different person for nearly forty years, and now that I’m different, it’s really difficult.

In August of 2021, the “View from the Top” actress disclosed that she had been diagnosed with MS. She did not make her first public appearance after breaking the news until November 2022. She attended her Hollywood Walk of Fame event with bare feet for comfort and a “fu MS” manicure.

Despite her health issues, the actress was eager to complete production on “Dead To Me.”
Saeed Adyani

Applegate has been able to turn to her close friend and “The Sweetest Thing” co-star Selma Blair, who also has MS, during her MS challenges.

Applegate acknowledged that her appearance in “Dead To Me” could be her final performance, despite her resiliency and extraordinary support system.