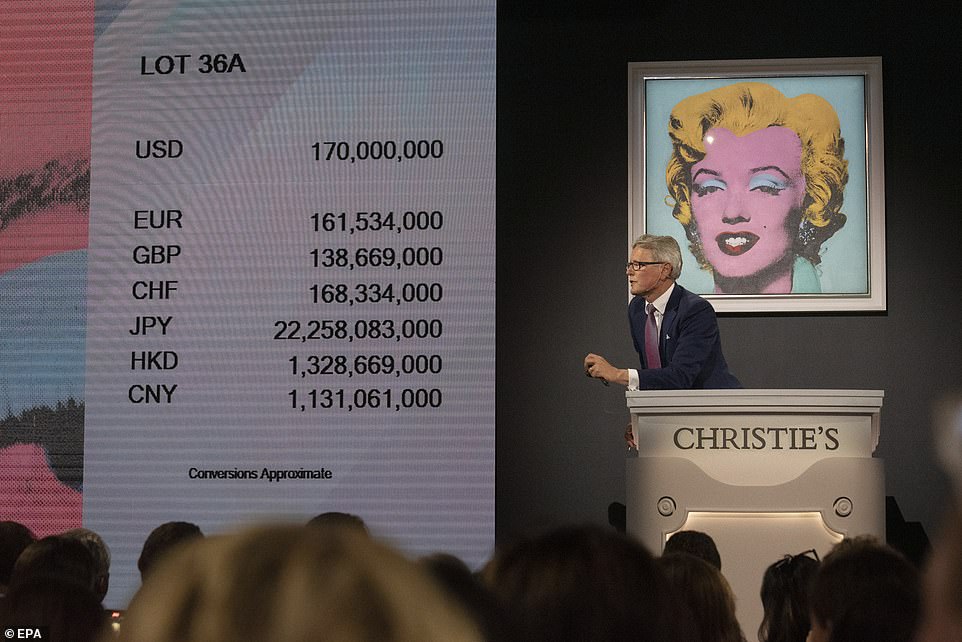 Wealthy art enthusiasts are eager to return to auctions following two years of a seemingly endless pandemic that took away the frenzy of in-person bidding.

And with the stock market still volatile as multiple industries recover from Covid-19 and supply issues, and NFTs and cryptocurrency slowing down amid seven percent US inflation, it appears that wealthy investors appear to be putting their money in something they can see and admire; art.

Monday’s auction at Christie’s in New York City was the official comeback of affluent art aficionados who paid as much as 21 times the pieces’ estimates – proving that it will take more than a geopolitical war or a worldwide pandemic for the art world to crumble.

Among the pieces sold was Mike Bidlo’s Not Picasso – estimated at $80,000 but which sold for a whopping $1.3 million. Francesco Clemente’s The Fourteen Stations, estimated at $120,000, sold for $1.8 million.

Christie’s said an unnamed buyer, believed to be American art dealer Larry Gagosian, purchased Warhol’s Marilyn 1964 silk-screen for $195 million. When the auction was announced earlier this year, they estimated it could go for as much as $200 million.

‘We did sell the most expensive painting of the 20th century,’ chairman of Christie’s 20th and 21st-century art department, Alex Rotter, told The New York Times. ‘This is a big achievement.’

Christie’s chief executive Guillaume Cerutti also said: ‘This is where we wanted to be, clearly. It proves we are in a very resilient art market.’

The sale at the British auction house unseated the previous record-holder Jean-Michel Basquiat, whose 1982 painting Untitled sold for a record $110.5 million at Sotheby’s in 2017.

The proceeds of the sale will go to the Thomas and Doris Ammann Foundation Zurich, which put the painting up for auction. The foundation aims to help children with health care and educational programs.

‘Shot Sage Blue Marilyn is the absolute pinnacle of American Pop,’ Rotter said in a statement announcing the auction. ‘The painting transcends the genre of portraiture, superseding 20th-century art and culture.’

The painting is built on a promotional photo of Monroe from the 1953 film ‘Niagara,’ screened with bright colors over her eyes, hair and lips.

Its title refers to an incident in which a woman shot at a stack of four Marilyn portraits in Warhol’s studio with a pistol, although Shot Sage Blue Marilyn was not struck by a bullet.

The 40-inch by 40-inch silk-screen Warhol is part of a series of portraits the pop artist made of Monroe following her death from a drug overdose in August 1962.

‘The spectacular portrait isolates the person and the star: Marilyn the woman is gone; the terrible circumstances of her life and death are forgotten,’ Georg Frei, chairman of the board of the Thomas and Doris Ammann Foundation, said

‘All that remains is the enigmatic smile that links her to another mysterious smile of a distinguished lady, the Mona Lisa.’

The art world has largely been spared of the general air of uncertainty of sweeping markets, in part because buyers are wealthy and heavily shielded from the volatility of more mundane factors such as the rising inflation.

During the peak of the pandemic, art sales were also driven by the sudden rise of crypto-art stemming from digital work authenticated with non-fungible tokens, or NFTs.

An NFT is a unique computer file encrypted with an artist’s signature, which acts as a digital certificate of ownership and authenticity.

In March 2021, Christie’s sold an NFT-based work by American artist Beeple for $69.3 million, leading to the platform gaining momentum.

But while the craze NFTs has seemed to fade, with sales fluctuating dramatically, the traditional art market seems to be doing more than just fine.

According to Statista, global sales in the art and antiques market increased by 29 percent in 2021, amounting to $65.1 billion- after decreasing sharply in 2020 due to the coronavirus pandemic.

Founder of the Fine Art Group Phillip Hoffman also told the Times that auctions in the next couple of weeks could raise as much as $2 billion.

Sotheby’s is offering $1 billion of modern and contemporary art during its marquee week.

After selling the first batch of works from the Macklowe Collection, the most expensive to hit the market at $600 million, last fall, Sotheby’s will auction the remaining 30 items when its sales open on May 16.

Highlights include Gerhard Richter’s 1975 Seascape, estimated at up to $35 million, and Rothko’s Untitled from 1960, which has a high-end pre-sale estimate of $50 million.

Sotheby’s said its modern evening auction of 19th and 20th-century works, including by Pablo Picasso and Philip Guston, is its ‘most valuable’ in the category in 15 years.

Picasso’s Femme nue couchée is appearing at auction for the first time, and Sotheby’s expects it to fetch more than $60 million. Other highlights include a Monet view of Venice tipped to fetch $50 million.

Brooke Lampley, head of sales for global fine art at Sotheby’s, said she expects records to be broken across categories.

‘The art market is very strong. That’s why we see such an amazing array of works on offer this season,’ she said.