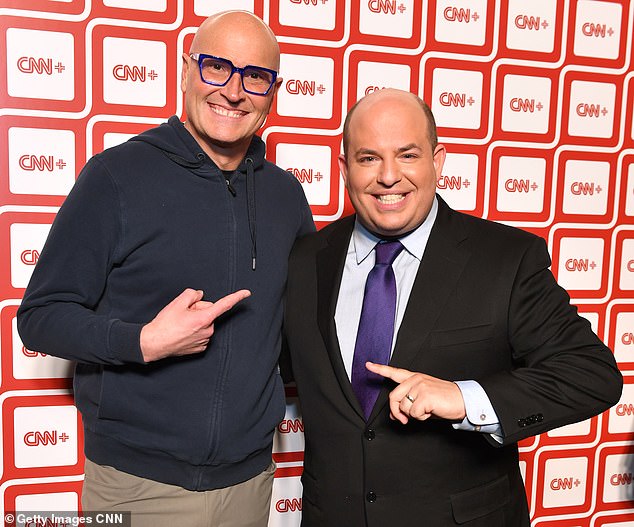 Chris Wallace has revealed he still does not know if his future lies at CNN or ‘some place else’ – four days after its streaming service flopped after just three weeks.

The news anchor, 74, who ditched Fox News after 18 years for a $5million job at CNN+, said he was ‘in good shape’ and was ‘going to be fine’ regardless.

But he warned he was concerned for members of his team as well as the hundreds of others left in the lurch when the ‘vanity project’ was axed on Thursday.

Bosses dumped the $300million initial investment after just three weeks amid feeble subscriber figures that were as low as 150,000.

It spat in the face of former chiefs such as Jeff Zucker, who had negotiated pumping $1billion into it over four years.

The ex-president of CNN Worldwide is also said to have blanked his old friend Warner Brothers Discovery CEO David Zaslav since he was ousted in February.

Chris Wallace speaks on future after CNN lack of subscribers

Wallace refused to be drawn on what his future plans were as he appeared on the Common Ground Committee last night.

Asked if he knew what was going to happen to him, he said: ‘No. No I don’t know. We’ll see. My gosh, it just happened on Thursday, give me a couple of days.

‘I will say this, I am going to be fine. I’m in good shape whether it’s CNN or some place else.

‘Frankly, what I’m mostly concerned about right now, and very, is my team and the hundreds of other people.

‘There were three hundred people I think that had jobs at CNN+, some of them had left CNN to go to streaming, some of them left other places to move across the country, and so I think you’re seeing a lot of the anchors at CNN+ doing everything they can to protect the people that were working on their team and to make sure they get a safe landing at CNN or some place else.’

He also told how streaming services appear to be ‘in the ICU on life support’ amid CNN+’s failure and Netflix floundering.

He said: ‘The idea was you’ve got to get a foothold in the streaming world because that’s where the future of news off the main stream networks is going to be.

‘Now you have some equally smart people that have come in with a diametrically opposed view.

‘These are the new bosses at CNN+, Warner Brothers Discovery, who have come to the conclusion that to have a narrow, niche product like a news streaming service doesn’t work.

‘I have absolutely no idea which is right and which is wrong but the Discovery people are in charge and so they made the decision.’

He added: ‘Two weeks ago streaming was king, now we’ve had the decision on CNN+ we’ve had the bad forecast about Netflix and suddenly streaming is in ICU on life support.

‘I think the positive view of streaming and the negative view on streaming were both wildly exaggerated and we’re just going to have to wait and see.’

CNN+ launched on March 29, shortly before CNN was taken over by new corporate parents.

The new leaders of Warner Bros Discovery quickly let it be known they considered it an ill-conceived idea. The service will be shut down at the end of April.

Executives said some CNN+ employees will be absorbed into the TV network but there will be layoffs. The head of CNN+, Andrew Morse, is leaving the company.

Some lower-level staff were incensed when they only found out they had lost their jobs through social media and the Press.

Industry insiders slammed Wallace for ditching a ‘plum gig at Fox News’ to host ‘the biggest media failure of the century’.

They told DailyMail.com: ‘Chris Wallace has total egg on his face – leaving his plum gig at FOX News to front the biggest media failure of the century.

‘At least Quibi lasted eight months – CNN+ couldn’t even make it 30 days. If I worked at CNN I’d be p***ed – $300 million to launch a streaming service that can’t even make it a month.

‘Chris Wallace interviewing Judy Collins should have been the first signal this was doomed – who was going to watch that? What a waste of $8m, CNN should have left him at FOX.

‘CNN had three years to plan this out – and they couldn’t even last 30 days, what an embarrassment.’

It comes as Zucker’s friendship with Zaslav is said to be hanging by a thread after he left CNN on February 2.

They have reportedly not spoken since despite previously being long-term allies in business and in life, according to the New York Times.

Three weeks after launching, CNN+ was dead in the water, amid woeful subscriber figures – about 150,000 – and an unpopular business model with bosses.

It marked the bitter end to one of CNN’s biggest vanity projects, with $300million sunk into the service and a budget of $1billion over four years.

Announcing the news, Mr Licht said consumers wanted ‘simplicity and an all-in service’ rather than ‘standalone offerings’ rather than what CNN+ offered.

He said some content will wind up on other company networks, and workers will get opportunities to apply for jobs elsewhere inside Warner Bros Discovery.

He said Morse would be leaving the company. Mr Licht wrote: ‘While today’s decision is incredibly difficult, it is the right one for the long-term success of CNN.

‘It allows us to refocus resources on the core products that drive our singular focus: further enhancing CNN’s journalism and its reputation as a global news leader.’

Key members of staff were reportedly only told about the news hours before a town hall meeting with the CEO at lunchtime.

Meanwhile most of the lower-level workers were left in the dark and only heard about it through the press and social media.

CNN was one of the most trusted news firms in the country, covering the whirlwind agenda with facts and analysis that few rivalled.

But over the last few years the media company has been accused of nosediving into a chaotic left-wing entertainment service that is a shadow of its former self.

The crisis culminated last week in what has been described as the ‘biggest flop in US broadcasting history’ as it pulled its hyped up new streaming app.

Bosses dumped CNN+, its $300million vanity project that was unveiled to much fanfare, after just three weeks amid feeble subscriber figures.

It spat in the face of former chiefs such as Jeff Zucker who had negotiated pumping $1billion into it over four years.

The firm was exposed when low-level staff revealed their jobs had been slashed without them knowing – only finding out through social media.

But they launched a furious fightback last night as they openly slammed senior figures for ‘pulling the rug out beneath us’.

The move appeared to have been triggered by executives at Discovery, which only completed its rocky merger with CNN owners WarnerMedia earlier this month.

Bosses had been dropping hints for weeks about their opposition to the streaming service, including CEO David Zaslav who was said to be against it from the start.

Yet the huge embarrassment, which sees stars such as Chris Wallace and Eva Longoria left in the lurch, seemed to be the climax of a raft of failings at CNN.