The Chief Secretary of the Treasury lauded “sterling strengthening” as the pound soared after Kwasi Kwarteng’s announcement of tax cuts, only to fall to a new record low mere minutes later.

Chris Philp tweeted at 10:17 a.m., “Great to see sterling rising on the back of the new UK Growth Plan,” along with a graph depicting the brief increase at 10 a.m.

At 10:44 a.m., however, the pound fell to a new 37-year low after the Chancellor disclosed tens of billions of pounds in tax cuts and expenditure.

The FTSE 100 plummeted to its lowest level in two months as equity markets were also notably negative. 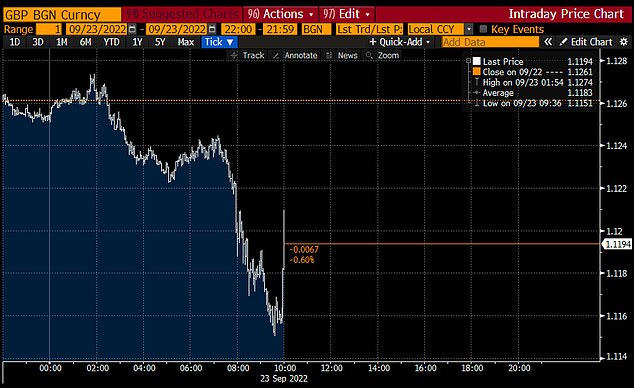 It has since stabilized at roughly 1.119 dollars, but this is still lower than the previous 37-year low reached earlier this week due to fears of rising interest rates.

At 10 a.m., while Kwasi Kwarteng was delivering his mini budget, the pound rose.

Within minutes after the surge, the pound had fallen to a new record low at 10.44 a.m.

It comes after the Bank of England raised interest rates by 0.5 percentage points to 2.25 percent on Thursday and warned the United Kingdom may already be in a recession.

The central bank had previously predicted that the economy would grow in the current financial quarter, but it has since stated that it now expects the Gross Domestic Product (GDP) to decline by 0.1%. This would mean that the economy would have experienced two consecutive quarters of decline, which is the technical definition of a recession.

Economists had cautioned that the Chancellor’s tax-cutting goals could exert additional pressure on the pound, which has also been affected by the strength of the US currency.

Martin Weale, a former policymaker at the Bank of England, warned that the new government’s economic objectives will “end in tears,” with a run on the pound akin to what occurred in 1976.

Treasurer of the Exchequer Today, Kwasi Kwarteng presents his mini-budget before the Commons.

Due to issues on the gilt market, ING economists warned on Friday that the pound might fall to 1.10 against the dollar.

Chris Turner, global head of markets at ING, stated, “Typically, looser fiscal policy and tighter monetary policy is a favorable combination for a currency – assuming it can be confidently funded.”

Here’s the catch: investors question the United Kingdom’s ability to fund this package, hence the underperformance of gilts.

Due to the Bank of England’s commitment to reduce its gilt portfolio, indigestion on the gilt market is a serious possibility that should keep the pound fragile. 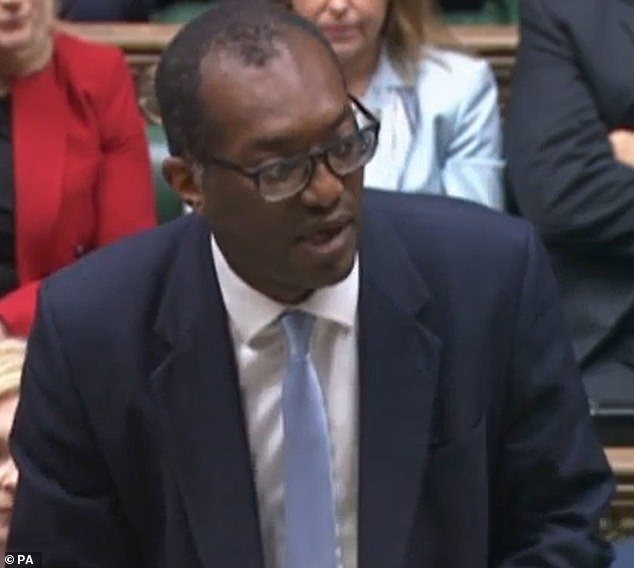 This morning, Mr. Kwarteng will unveil a massive package of tax cuts in the House of Commons.

Concerns on rising interest rates and the effect on consumer spending continued to weigh on the stock market.

Derek Halpenny, the head of research at MUFG, cautioned that the pound could fall further as a result of policies that “lack credibility and raise concerns over external financing pressures, given that the combined budget and current account deficit appears to be heading towards approximately 15% of GDP.”

Five-fifths of the overseas banks and research consultancies surveyed by Reuters last week said there was a strong danger that confidence in British assets would decline dramatically over the next three months.

Meanwhile, Bank of England policymaker Jonathan Haskel stated yesterday that the central bank was in a precarious situation, as the government’s expansionary fiscal policy appeared to conflict with the BoE’s efforts to reduce inflation.

Economists have expressed anxiety over the large borrowing that will be necessary to close the government’s budget gap.

The two-year freeze on energy costs for individuals and businesses that was announced earlier this month might cost more than £150 billion, while tax cuts could add a further £50 billion to the bill.

According to the esteemed IFS think tank, it would be the largest tax change since Nigel Lawson’s 1988 Budget, when Ms. Truss’s hero Margaret Thatcher was Prime Minister.

This morning, the Pound reached a fresh 37-year low against the U.S. dollar of just 1.11, highlighting the hazards of increasing the United Kingdom’s £2.4trillion debt pile while the Ukraine conflict drives inflation surging.

So far in August and September, the yield on 10-year government bonds has increased the most since October and November 1979, highlighting the jitteriness of markets over the situation.

Ms. Truss and Mr. Kwarteng contend, however, that increasing economic activity can make up the difference, citing decades of mediocre productivity gains.