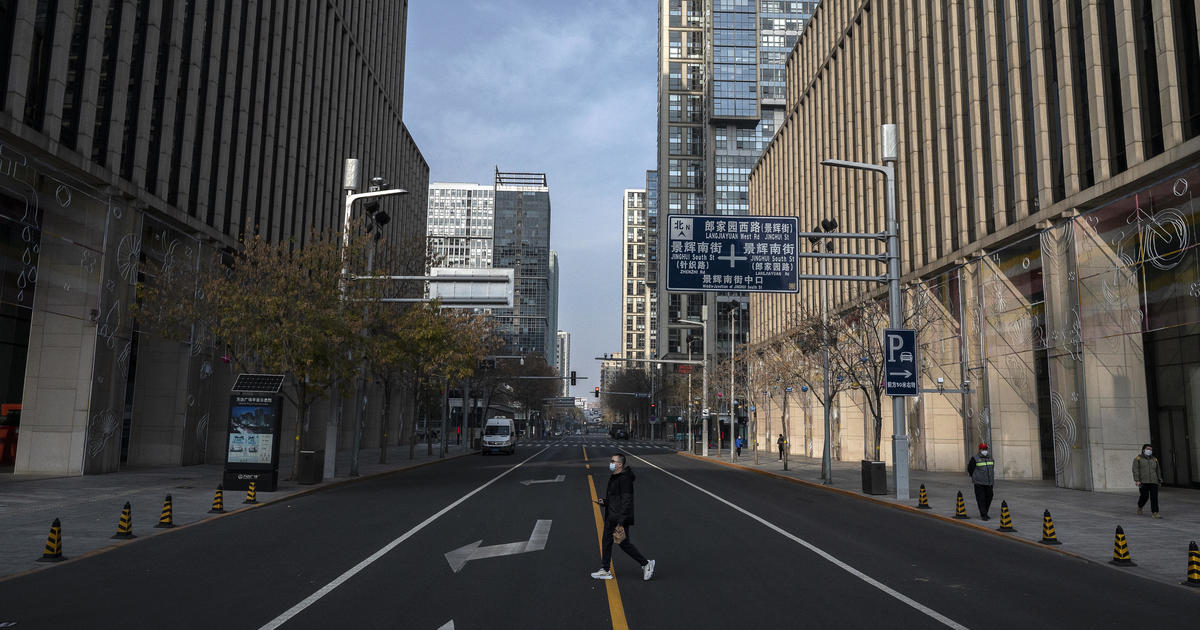 China is increasing its lockdowns, notably in a major city where manufacturing employees battled with police this week, as the number of daily COVID-19 cases reaches a record high.

On Thursday, the 6.6 million inhabitants of eight districts in Zhengzhou were ordered to remain at home for five days, unless they needed to purchase food or receive medical care. The local authorities ordered daily mass testing as part of a “war of annihilation” against the virus.

During riots on Tuesday and Wednesday, Zhengzhou police pummeled iPhone plant employees who were protesting a salary disagreement.

The National Health Commission announced Thursday that 31,444 additional cases have been registered in China in the preceding 24 hours. This is the largest daily number since the coronavirus was initially identified in Wuhan, China, in late 2019.

A guy wearing a mask to prevent the transmission of COVID-19 crosses a largely deserted street in Beijing’s Central Business District on November 23, 2022. Last week, in an attempt to rein in the escalating number of cases, the local administration shuttered the majority of retailers and restaurants for indoor eating, converted schools to online learning, and requested that residents work from home. Kevin Frayer/Getty Photograph

The average daily number of reported cases is rising gradually. This Monday, officials in China announced the first cases of COVID-19 in six months, increasing the total to 5,232.

China’s governing Communist Party remains dedicated to its “zero-COVID” approach, which strives to isolate every case and eradicate the virus, while other governments abandon anti-virus regulations and rely on vaccines and immunity from previous infections to avoid fatalities and severe sickness.

Businesses and residential neighborhoods from the southern industrial hub of Guangzhou to the northern capital of Beijing have been placed under different types of lockdown, which disproportionately affect migrant blue-collar workers. In many instances, locals assert that the limits exceed what the federal government permits.

Monday, Guangzhou restricted entry to its Baiyun district of 3.7 million residents, while residents of some sections of Shijiazhuang, a metropolis of 11 million people southwest of Beijing, were instructed to remain at home while mass testing is undertaken.

Beijing built a hospital at an exhibition center this week and halted entrance to Beijing International Studies University following the discovery of a viral case. The capital city has previously restricted access to shopping malls, office buildings, and housing complexes.

This month, the Communist party announced plans to lessen disruptions by reducing quarantines and implementing other modifications.

The party is attempting to curb the most recent round of epidemics without closing manufacturing and the rest of the economy, as it did in early 2020. It employs “closed-loop management,” in which factory workers have no touch with the outside world.

In the three months ending in September, economic growth increased to 3.9% from 2.2% during the first half of the year. But activity was already beginning to decline, and growth for the year is projected to fall far short of the government’s 5.5% target.

Foxconn, the world’s largest contract manufacturer of smartphones and other electronics, is struggling to fulfill orders for the iPhone 14 after thousands of employees quit the Zhengzhou factory last month due to unsafe working conditions.

Foxconn, based in Taiwan, stated that it has always met its contractual payment obligations.

The company denied online claims that Zhengzhou factory employees infected with the virus lived in dormitories. It was stated that facilities had been disinfected and passed government inspections prior to the arrival of employees.

»China expands its lockdowns in response to its “zero-COVID” policy«