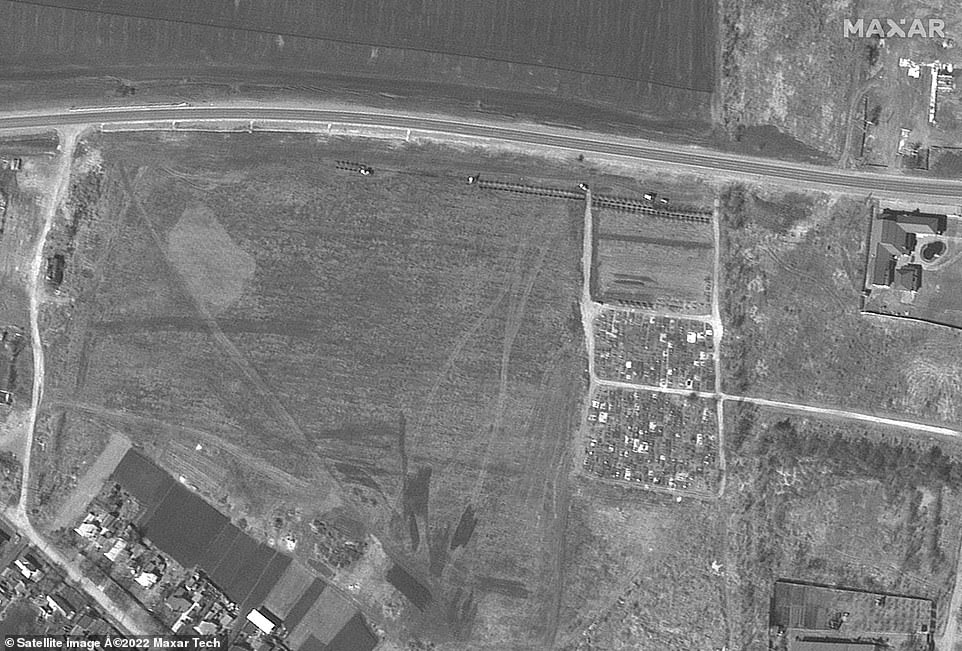 New satellite photos have revealed a second mass grave near Mariupol – as Russian forces continue to pummel the last 2,000 Ukrainian defenders trapped in a steelworks in the city.

The latest photos from Maxar Technologies showed the site at a cemetery in the town of Vynohradne. It has several newly dug parallel trenches measuring about 131 feet long, Maxar said in a statement.

On Thursday, Maxar released photos of what appeared to be rows upon rows of more than 200 freshly dug mass graves next to a cemetery in the town of Manhush, outside Mariupol. That prompted Ukrainian accusations that the Russians are trying to conceal the slaughter of civilians in the city.

‘This confirms again that the occupiers arrange the collection, burial and cremation of dead residents in every district of the city,’ Andryushchenko said on the Telegram messaging app.

The Ukrainians estimated that the graves seen in the photos released Thursday could hold 9,000 bodies. The Kremlin did not respond to the satellite pictures.

Meanwhile, Russian forces have resumed air strikes on and are trying to storm the Azovstal steel works where Ukraine’s remaining forces in Mariupol are holding out, Ukrainian presidential adviser Oleksiy Arestovych said on Saturday.

‘The enemy is trying to strangle the final resistance of the defenders of Mariupol in the Azovstal area,’ Arestovych said on national television.

More than 100,000 people – down from a prewar population of about 430,000 – are believed trapped in Mariupol with little food, water or heat, and over 20,000 civilians have been killed in the nearly two-month siege, according to Ukrainian authorities.

Most attempts to evacuate civilians from the city have failed because of what the Ukrainians said was continued Russian shelling.

Mariupol has been reduced largely to smoking rubble by weeks of bombardment, and Russian state TV showed the flag of the pro-Moscow Donetsk separatists raised on what it said was the city’s highest point, its TV tower. It also showed what it said was the main building at Azovstal steel plant in flames.

Russia has pulled a dozen crack military units from Mariupol to bolster the offensive elsewhere in the Donbas, while other troops continue to keep the remaining Ukrainian troops in the city pinned in the Azovstal steelworks, the last remaining stronghold, Ukrainian officials said.

Putin is said to have ordered his forces not to storm the plant to finish off the defenders but to seal it off instead in an apparent bid to force them to surrender.

Russian forces have been pummeling the 2,000 Ukrainian fighters still holed up inside, the mayor’s office reported.

‘Every day they drop several bombs on Azovstal,’ said Petro Andryushchenko, an adviser to Mariupol’s mayor. ‘Fighting, shelling, bombing do not stop.’

Overall, the Kremlin has thrown more than 100,000 troops and mercenaries from Syria and Libya into the fight in Ukraine and is deploying more forces in the country every day, Danilov said.

‘We have a difficult situation, but our army is defending our state,’ he said.

Mariupol has taken on outsize importance in the war. Capturing it would deprive the Ukrainians of a vital port and complete a land corridor between Russia and the Crimean Peninsula, which Putin seized from Ukraine in 2014.

It would also allow Putin to throw more of his forces into the potentially climactic battle for the Donbas and its coal mines, factories and other industries, or what the Kremlin has now declared to be its main objective.

Ukraine said it would make a fresh attempt on Saturday to evacuate civilians from Mariupol, the devastated port city largely controlled by Russian forces, as hopes for a weekend truce during Orthodox Easter faded.

The war enters its third month on Sunday with civilians continuing to pay a heavy price amid the ongoing fighting.

‘Today we will again try to evacuate women, children and the elderly,’ Deputy Prime Minister Iryna Vereshchuk said on Telegram.

‘If everything happens as planned, we will start the evacuation around noon.’