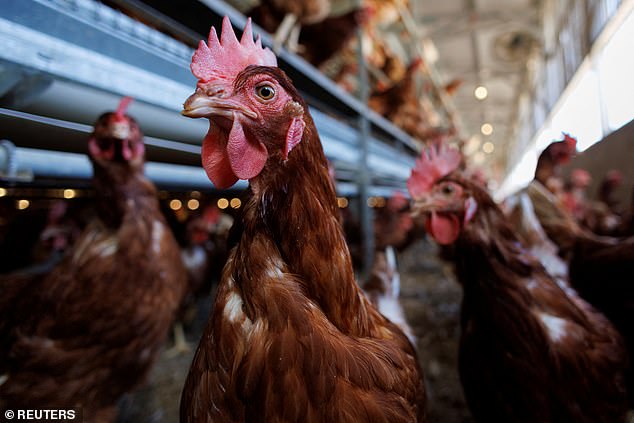 Cheap chicken may soon be a thing of the past – with the price of poultry set to skyrocket in the coming months.

Chicken could soon be as expensive as beef as the cost of bird feed goes up – with fast food restaurants like Nando’s and KFC already rising their prices.

Ten chicken wings and two sides at peri-peri chicken chain Nando’s has risen from £14.95 to £16 since November, according to the Sunday Times.

The price of chicken is rising faster than any other protein because of feeding costs, rising energy prices and wages rise.

The UK’s largest chicken supplier 2 Sisters said price inflation of 15 per cent will be needed ‘will be needed to even begin to cover the increasing cost of production’ of the poultry.

The Office of National Statistics recorded a 19 per cent rise in the price of chicken between March 2020 and March 2022.

Chicken feed is made using soybean and wheat which has seen massive price rises due to the war between Russia and Ukraine.

Russia and Ukraine produce a third of the world’s grain – which is used to produce cooking oil – and both are experiencing particularly poor harvests due to the Russian invasion which began on February 24.

Supermarkets are even imposing limits on how much cooking oil customers can buy due to supplies being hit by the war in Ukraine.

With sunflower oil in short supply, demand has increased for olive and rapeseed oils.

As a result, all are now being rationed both in-store and online in a number of major supermarkets. Shoppers are restricted to three bottles of cooking oil each in Tesco and two in Waitrose and Morrisons.

Farmers have warned rationing could spread beyond cooking oil.

Richard Griffiths, chief executive of the British Poultry Council, told the Sunday Times: ‘It is no secret that the cost of production is increasing, particularly in chicken feed, and that cost will have to land somewhere.

‘Chicken remains affordable and accessible to the majority of consumers, with options to suit every wallet.

Dr Benjamin Coles, an economic geographer at the University of Leicester backed speculation on chicken and beef becoming similarly priced in an interview with the Sunday Times.

‘We import a lot of beef so there is the cost of transportation.

‘But I can say that the supply chain for a chicken is extraordinarily big and complicated, and it is dependent on a lot chicken feed including soybeans, which are imported, energy as well as transport costs.’

The latest price warning comes after supermarkets warned last week that the price of groceries in Britain is now increasing at its fastest rate in 11 years.

Before the 1960s, chicken was a luxury foodstuff in Britain with some families even opting to have a roast chicken – rather than turkey – for Christmas Dinner.

In 1956, the National Food Survey recorded poultry as 60p per kilogram but by 1962 the price had plummeted to 44p a kilogram.

The inflation crisis is adding an extra £271 to the amount average households will pay at the till this year as more shoppers switch to budget retailers Lidl and Aldi.

Data from market researcher Kantar showed that overall grocery price inflation hit 5.9 per cent this month in what is the fastest rise since December 2011 as the number of items on promotion at supermarkets decreased.

Prices are rising fastest in products such as dog and cat food, fresh lamb and beef, savoury snacks and crisps but  they are falling in spirits – as surging prices cause the biggest squeeze on UK household incomes since the 1950s.

They are both still opening new stores and hold a combined 15.4 per cent market share – up from just 5.5 per cent ten years ago.

Fraser McKevitt, head of retail and consumer insight at Kantar, said: ‘The average household will now be exposed to a potential price increase of £271 per year.

‘A lot of this is going on non-discretionary, everyday essentials, which will prove difficult to cut back on as budgets are squeezed. We’re seeing a clear flight to value as shoppers watch their pennies.

‘The level of products bought on promotion, currently at 27.3 per cent, has decreased 2.7 percentage points as everyday low price strategies come to the fore.’

The chairman of supermarket giant ASDA has said’ the Government needs to do more to help tackle the cost-of-living crisis.

Lord Rose said the crisis comes at a time when there are a range of issues which need to be dealt with, including managing inflation and the impact of the war in Ukraine.

He told the BBC’s Sunday Morning show: ‘What we all now have to do is maybe change our behaviours. I will personally look at my own behaviour – what things I need and what things I don’t need.

‘The Government can’t solve all the problems. We together, all of us, need to think of thoughtful ways to make this better.

‘At the end of the day, sadly, the consumer will also suffer.’

She argued that inflation – which tracks the cost of the same items over time – is an imperfect way of measuring how much prices are increasing because the cheapest products are no longer available.

Mr McKevitt said supermarkets have been listening, with Asda, Morrisons and Tesco all taking steps to offer cheaper food to customers.

Kantar found that supermarket sales dropped 5.9 per cent over the 12 weeks to April 17.

Sales are also, for the first time since the pandemic started, 0.6 per cent below where they were two years ago. This period now takes into account the early days of the first lockdown.

While Tesco’s sales fell 4.8 per cent year-on-year, sales at Sainsbury’s, Asda and Morrisons were down 7.7 per cent, 10.3 per cent and 10.5 per cent respectively.

Speaking about the budget supermarkets, Mr McKevitt added: ‘Over one million extra shoppers visited Aldi and Lidl respectively over the past 12 weeks compared with this time last year.

‘Both retailers achieved record-breaking market shares, with Aldi now holding 8.8 per cent while Lidl stands at 6.6 per cent. Collectively, the two discounters account for 15.4 per cent of the market – up from just 5.5 per cent a decade ago.’

Tesco was the only other retailer whose market share grew over the period – by 0.3 percentage points to 27.3 per cent of total grocery sales.

Sainsbury’s accounts for 15 per cent of the market, followed by Asda at 14.1 per cent and Morrisons at 9.5 per cent. Co-op, Waitrose, and Iceland have shares of 6 per cent, 4.8 per cent and 2.2 per cent respectively.

Ocado’s share remains steady at 1.8 per cent and its sales were up 13.9 per cent compared with two years ago.

But overall online grocery sales were down by almost 15 per cent compared with 2021 and, over April, online’s share dipped by 1.5 percentage points.

Mr McKevitt said: ‘While online shopping is definitely here to stay, it’s less of a necessity now. Shopper confidence about heading out and about and getting back to store has gone up and half a million fewer households bought over the internet compared with last year.’

Kantar also noted that Russia’s invasion of Ukraine has increased public awareness of supply pressures and there was evidence of stocking up as consumers prepared for limited availability.