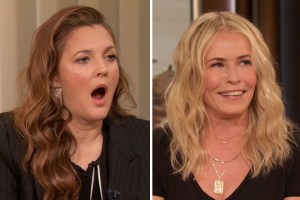 Even celebrities are susceptible to the perils of dating apps. During the current episode of The Drew Barrymore Show, Chelsea Handler and Drew Barrymore shared their own embarrassing online dating memories.

During her visit to promote her new Netflix stand-up special, Revolution, Handler also participated in a game of Red Flag, Yellow Flag, Green Flag, which led to a narrative about how she discovered the function on dating apps designed for individuals trying to make friends.

“I was conversing with this man. “We were texting, and he said something similar to, ‘Oh, I’m just putting the kids to bed with my wife,'” she revealed. I reread it and said ‘What?’ Then I returned, and he answered, “Oh, I’m just here with some friends.” Wedded with children’ And I wondered, “Who uses a dating app to make friends?”

As Ross Mathews waved his red flag around, the comedian, who found it “so strange,” said, “I was like, ‘Hey buddy! I’m not talking to you to become friends, OK?'” before adding, “I was searching, and I think you could say something like, ‘I’m simply here to meet people.'”

Barrymore claimed that she frequently encounters possible suitors who are merely using the app to meet acquaintances. She responded, “I’m like, ‘OK, well, we’re all shopping here, and if your cart is full, why are you still here?'”

Mathews then said, “Yeah, it’s like going to the supermarket to return a library book. You’re in the wrong place, sweetheart.”

And you didn’t believe Barrymore would let this conversation pass without mentioning her own terrifying experiences, did you? The actress described a peculiar experience she had while speaking with someone on the app.

This individual wrote, ‘I grew up above a cobbler business, thus the fragrance of leather brings me back to my childhood every time I smell it.’ She continued, “And I was like, ‘Okay,’ and then I joked, ‘Well, if I smell any leather today, I’ll let you know.’ “I remarked, ‘What an intriguing tale!'” And then he says, “Oh, I made that up.” And I simply clicked “Unfollow.”