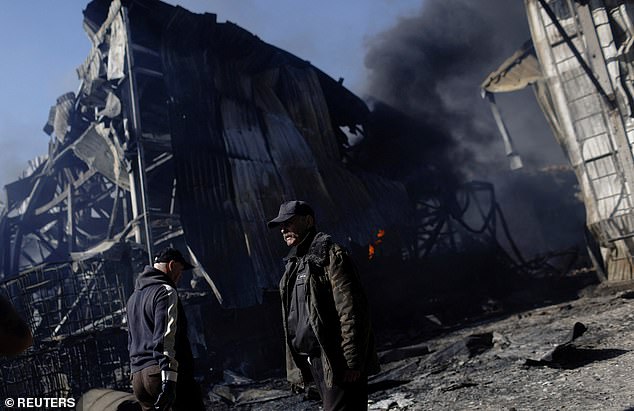 Corrupt Russian officers may have saved cash on tyres for their trucks and armoured vehicles by opting for cheap Chinese alternatives.

With Russian vehicles and armoured trucks getting stuck in the mud when veering off road, officials in the West are pointing to Chinese exports as a key factor behind the stalled invasion of Ukraine.

The poor quality of the tyres has meant Russian vehicles often get mired in difficult terrain, slowing the military advance of Putin’s forces as the weather turns wetter.

Russian generals are notoriously corrupt. Russia has a defense budget of around £60billion a year, but much of that budget is siphoned off at various levels,’ an intelligence source told the New Zealand Times.

‘The impact of this is that the Russians are forced to buy cheap tires to fit on expensive armored vehicles, and they just don’t work.’

China’s version of the tire is the Yellow Sea YS20, of significantly poorer quality, according to self-described ‘tyre expert’ and University of Chicargo academic Karl Muth.

A set of 50 Michelin XZL tyres retails on Alibaba at approximately $36,000, whereas 50 sets of the Chinese equivalent retails at around $208.

Poor vehicle maintenance could also partially explain the stalling. Leaving tyres in direct sunlight for months on end often causes them to rip, adding to the amount of abandoned vehicles Ukrainians have encountered in various parts of the country during the war.

One photo shows a Russian Army Pantsir-S1 SAM stuck in the mud after its tyres burst.

‘There is a huge operational level implication in this,’ commented Trent Telenko, a retired US Department of Defence Civil Servant who carried out vehicle maintenance for the US army.

Potential tyre ruptures may be forcing the Russian army to stick to roads to else risk losing their armoured cars in the muck, leaving them more exposed to drone attacks and military ambushes.

Crimea and south Ukraine is dryer with terrain posing less of a risk for the Russian military, but wet conditions pose a challenge elsewhere in the country.

Russia is attempting a push into the Donbass region of east Ukraine, hoping to solidify its foothold in the country to place itself in a stronger bargaining position.

‘Putin has modified his approach,’ ex-MI6 chief Sit Alex Younger told the Sunday Mirror. ‘Arguably his objectives are more realistic and he is not going to give up.’

Russia has been forced to merge and redeploy depleted and disparate units from failed advances in northeast Ukraine, a British military update said on Saturday.

The Russin army will be unable to fight another war for years because of catastrophic kit losses in Ukraine, defence experts have also said.

But most Russian soldiers could be unable to use it, he added, owing to insufficient training planning for troops having to rely on outdated equipment.

But the amount of Russian soldiers needed to seize the whole country and control the entire population would be close to one million, putting Russia’s chances of occupying the entire country out of reach.

A flood of Ukrainian conscripts, high-tech weaponry sent by NATO countries and Russian strategic failures have all helped stymie the Russian advance.