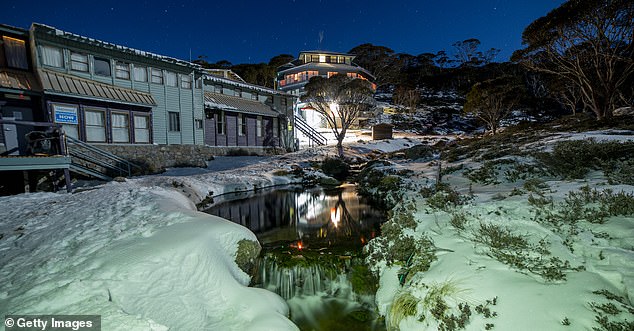 A ski resort in New South Wales has been penalised nearly $250,000 for dumping millions of gallons of sewage into the pristine waterways of a national park.

Over the course of 78 days in 2019, Charlotte Pass Ski Resort discharged 11,6 million liters of poorly treated sewage into streams near Kosciuszko National Park.

The Land and Environment Court concluded that the park’s sewage, which had increased amounts of ammonia and nitrogen, presented an ecological risk to aquatic life and species.

The Land and Environment Court determined in 2019 that the park created an ecological risk to aquatic life and creatures due to the leakage of sewage containing increased amounts of ammonia and nitrogen into neighboring creeks and streams over 78 days (pictured, a pair ski at Charlotte Pass in 2020)

According to the Sydney Morning Herald, the court heard that malfunctioning diffusers in the resort’s sewage filtering tanks caused only partial treatment of the sewage.

Tony Chappel, the chief executive of the Environment Protection Authority of New South Wales, asserted that the resort was aware that the sewage plant’s infrastructure required maintenance.

Mr. Chappel stated, “If you know that your equipment does not meet the statutory requirements, it must be fixed; refusal to do so is an intolerable disrespect for the environment.”

The resort in the Snowy Mountains was requested to pay $233,425 in total. It was penalized $144,000 in addition to $89,425 for the investigation conducted by the Environmental Protection Agency.

In 2019, EPA agents identified excessive amounts of ammonia and nitrogen during a regular water quality test.

The Snowy Mountains resort was fined $144,000 in addition to $89,425 for the inquiry by the Environment Protection Authority (pictured, Charlotte Pass)

On July 23, they collected two samples from a creek next to the resort’s sewage treatment facility, one from upstream and one from downstream.

The testing indicated that the downstream water sample had 600 times more ammonia than the upstream sample.

Officers then examined the nitrogen concentration in the same creek and discovered that the downstream sample had eight times more nitrogen than the upstream sample.

Due to malfunctioning diffusers in the resort’s sewage filtration tanks, only a portion of the sewage was cleaned, the Land and Environment Court heard (pictured, the ski resort)

In her decision, Justice Rachel Pepper stated that the sewage ‘certainly’ caused ecological damage, but that it could not be held solely responsible for future problems.

She stated that the resort’s knowledge that the diffusers in the sewage tanks were defective and required repair exacerbated the offense.

In imposing the penalties, which totaled roughly a quarter-million dollars, Justice Pepper stated that she had taken into account the resort’s expression of regret and its early guilty plea.

Charlotte Pass Ski Resort was ordered to publish notices of the court’s decision on its social media channels and website.

The Australian Daily Mail has reached out to the park for comment.