President Cyril Ramaphosa has promised sweeping changes in the troubled Mangaung metro after his presidential imbizo visit to Bloemfontein in the Free State.

“Some of you are saying that it’s only clean when I am here. You should see our presence here as the beginning of a process that is going to lead to change. Change is here and on its way in Mangaung,” Ramaphosa said on Saturday.

Thousands of residents used the imbizo to tell Ramaphosa about the hopes, dreams, disappointments and frustrations of living in the cash-strapped metro, which was placed under administration this week.

Ramaphosa and two dozen cabinet ministers gathered for the second post-state of the nation imbizo, which was held at Dr Molemela Stadium.

The visit comes days after the cabinet placed the metro under administration due to factional fighting, financial mismanagement and poor governance.

Like the inaugural imbizo in North West last month, the event almost descended into chaos and police had to restore order after Mangaung residents fought over who should speak on their behalf. Social development minister Lindiwe Zulu addressed some of the residents, calling for order.

Among the thousands of residents who attended was Mpho Mojanaga from the Mangaung Service Delivery Forum, who told Ramaphosa about corruption in the metro.

“In that municipality there are family members, concubines and friends. Women have been abused sexually for a very long time. Today a leader impregnated a lady and then she got a job in the municipality so that his baby can be maintained by the municipality when we don’t have roads,” he said.

“Mangaung has collapsed. Mangaung is disastrous. Mr President, people want to hear from you. If we have to leave at 8pm tonight, we will. People want to talk to you. We have spoken to the premier, she does not listen. We have spoken to the MECs, they don’t listen. You are our last hope. If you leave without addressing us and our concerns, Bloemfontein is going to burn.”

Kabelo Lekgotle complained about the high number of foreigners in the country, saying: “Please hear us Mr President, how long must we cry? We are dying in SA. We are even scared of the communities that we live in. Where do you want us to go, Mr President?”

Deputy minister David Mahlobo interrupted him and was heckled as he said: “Just because someone is not from SA, it does not mean that you must discriminate against them. If they commit crime, then it is a crime irrespective of their nationality.”

Lekgotle replied: “We are tired of home affairs giving out fake identity documents.”

Mojalefa Molaudi used his two minutes to tell Ramaphosa he was tired of metro employees who pocketed money that was meant to be used for service delivery.

“Some of these officials think this is their ANC and that they can use it as a step ladder to a better life and more money in their pockets. We are here to tell them that the ANC is not theirs, it belongs to all of us.”

Responding to complaints about foreigners, police minister Bheki Cele said: “We don’t chase foreign nationals or nationals, we chase criminals. It does not matter whether you are from SA or where you come from. We arrest you and then ask your nationality afterwards.”

Transport minister Fikile Mbalula promised to return after Easter. “I want to attend to the roads issues in Mangaung. I will come with Sanral and they will look at their budget for community development and see how we can work together with the province to fix the roads.”

Water and sanitation minister Senzo Mchunu also gave the communities a report back, promising an end to interrupted water supply.

Co-operative governance minister Nkosazana Dlamini-Zuma said: “I think we all agree that Mangaung is messed up but the national government has taken a decision to place Mangaung under administration and take over the metro.

“We are going to work together with the minister of finance, Treasury and Cogta to try and get things better in Mangaung. 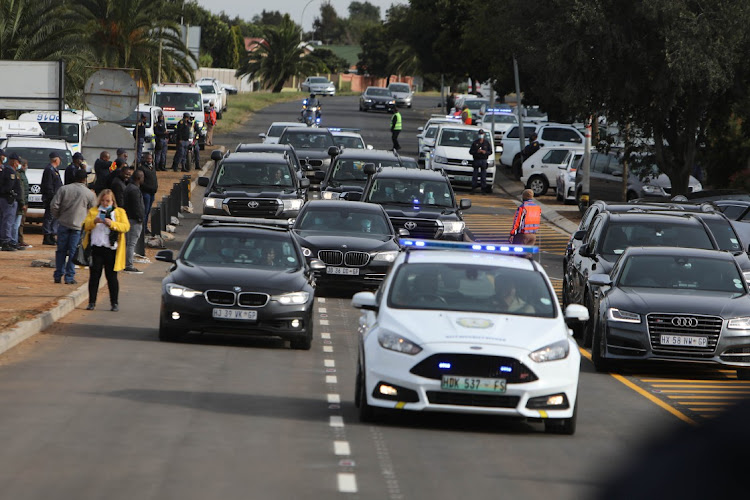 The presidential motorcade during an inspection of the Vereeniging interchange bridge in Bloemfontein before the imbizo on April 9 2022.
Image: Alaister Russell

In his closing remarks, Ramaphosa said the government decided to prioritise the Free State because it was faced with special challenges.

He said the government had received more than 3,000 WhatsApp messages from those who did not get a chance to voice their concerns. “We will provide feedback, no matter how difficult that the issues you have raised are.”

Ramaphosa promised communities that unemployment, crime, sewerage, the water supply and grime will be attended to. “We will get this country right,” he said.