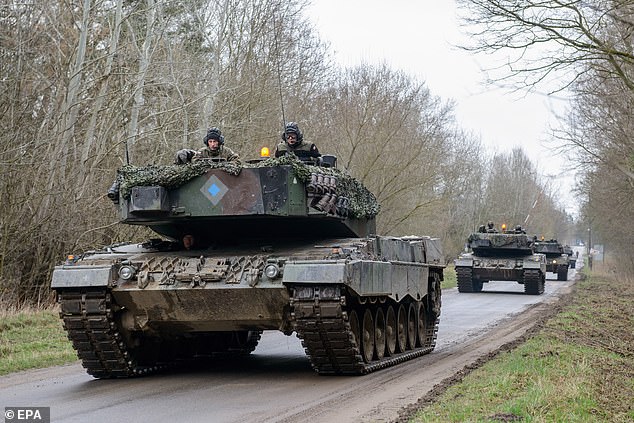 Russia has warned that sending German tanks to the front lines in Ukraine will result in “nothing good” after Poland formally asked authorization from Olaf Scholz to provide Leopard 2 vehicles to the war effort.

A serious dispute has erupted between the West and Germany over the decision to provide German-made tanks to Kyiv, with Chancellor Scholz fearing that the Western supply of modern equipment could draw NATO into the conflict and provoke retaliation from the Kremlin.

The cowardly leader is under strong pressure from Ukraine and NATO partners to approve the delivery, but he has remained unmoved thus far.

Today, it appears that the West is edging closer to an accord, as Berlin’s defense minister Boris Pistorius gave the go-ahead for allies to begin training Ukrainian forces on German-made Leopard tanks.

Olaf Scholz has been obstructing the delivery of German-made Leopard 2 tanks to Ukraine, which are depicted here with Polish troops.

After meeting with Pistorius, NATO general secretary Jens Stoltenberg underlined that a decision will be made “soon” on the urgently required supplies.

Before countries such as Poland or Finland could commit to re-exporting German-made tanks such as the Leopard 2, German legislation requires the government’s approval.

Instead of relying on Soviet-era tanks, the Ukrainian government has pleaded vehemently for the delivery that they hope might reverse the tide of the battle.

Today, Poland’s Minister of Defense, Mariusz Blaszczak, stated that the Germans have already received their request for permission to send Leopard 2 tanks to Ukraine.

I also request that Germany join our coalition of nations backing Ukraine with Leopard 2 tanks.

The request comes after Annalena Baerbock, the German foreign minister, stated on Sunday that Germany would not object if Poland requested Leopard tanks.

Dmitry Peskov, a spokesperson for the Kremlin, ratcheted up the tension by stating that ‘these deliveries will bring nothing positive to the future relationship’ between Berlin and Moscow, adding that ‘they will leave a lasting impression.’

Despite the fact that dozens of nations have agreed to provide Ukraine with military equipment, Kyiv is pleading for the more powerful Leopard tanks, which are viewed as essential for breaching enemy lines.

Fear of Russian reprisal prevents the chancellor from sending the tanks or permitting other NATO nations to do so.

Today, Pistorius stated that he has “strongly encouraged partner nations with deployable Leopard tanks to train Ukrainian forces on these tanks.”

Before a meeting with Stoltenberg in Berlin, he continued, “I anticipate a decision will be made soon.”

Stoltenberg applauded the minister’s “clear message” because, once a decision has been made on the delivery of battle tanks, it will take time to… prepare them and train Ukrainian forces on their use.

He noted that a judgment was expected “soon.”

Stoltenberg stated, “We must provide Ukraine with heavier and more advanced systems, and we must do so more quickly.”

He noted that Moscow has shown no evidence of reversing course in its invasion.

We have no evidence that President Putin has altered his objectives… The only way to achieve enduring peace, he argued, is to make it apparent to Putin that he cannot win on the battlefield.

Pistorius had previously emphasized that Berlin was not opposed to Leopard delivery, but that no decision had been made as of yet.

In an interview with the German network ZDF, he stated, “We are supporting Ukraine so that they do not lose this war against Russia.”

In this regard, Germany is doing more than virtually any other ally outside the United States.

When asked when Germany will make a decision regarding Leopard tanks, Pistorius stated that the matter was out of his hands.

He stated, “This decision will be made in the chancellery.”

In addition, he defended Scholz against accusations of hesitancy in approving the supply of Leopards.

“Taking the initiative does not mean blindly proceeding,” he remarked. And if the decision takes an additional day or two, well, that’s the way it is.

These remarks follow severe criticism of Scholz from a former minister and member of Angela Merkel’s cabinet.

Norbert Roettgen, a Bundestag member and former chair of the Foreign Affairs Committee, lashed out at his chancellor, accusing him of ‘obstinacy’ on an issue that could assist fight the invading armies of the Kremlin.

He stated on BBC Radio 4’s Today Programme, ‘There is a deep split within the government: the Chancellor and the SDP on the one side, who are fiercely resisting delivering adequate and very much needed weapons like the Leopard 2 to Ukraine so that Ukraine can win, and the other two coalition partners, the Greens and the Liberal Democrats, who have long been in favor of delivering weapons.

However, they are currently overcoming the reluctance of the chancellor. Since months, there has been a clear majority in the Bundestag supporting the delivery of heavy weaponry. Since the summer, we have been requesting that.

In the Donetsk region on January 20, Ukrainian soldiers can be seen atop a T-72 tank from the Soviet era, which is regularly employed in the ongoing fighting.

When asked if Scholz will change his position, Roettgen responded, ‘I do expect him, and to be completely honest, I was absolutely certain that he would not allow the Ramstein summit to occur without making a choice.

Regarding Scholz’s obstinacy, I made a public supposition that proved out to be false.

Last week, conversations were made at the Ramstein airbase in southern Germany over the delivery of weaponry from the West, but Scholz remained steadfast.

If Scholz grants the green light, the German defense company Rheinmetall stated it could provide 29 Leopard 2A4 tanks by April/May and an additional 22 of the same model by the end of 2023 or the beginning of 2024.

It could also provide 88 older Leopard 1 tanks, according to a spokesperson.

European governments have agreed to pay an additional 500 million euros to arm Kiev, the most recent boost to the multibillion-dollar effort to assist Ukraine in repelling Russian soldiers.

Morawiecki stated, ‘Even if we don’t acquire such an approval in the end, we will still give our tanks to Ukraine – within a small coalition of countries, even if Germany is not part of that coalition.’

Later, the spokesman for the Polish government, Piotr Muller, told state television that a formal request was “an important gesture that we will certainly carry out in the coming days.”

Poland declared earlier this month that it was prepared to supply 14 Leopard tanks to Kiev, but was awaiting a clear authorization from Berlin.

Berlin has emphasized that all allies must collaborate.

Monday, a spokeswoman for Scholz stated that the government ‘does not exclude out’ the transfer of tanks, but added, ‘It has not yet been decided.’

Today, Roettgen continued, ‘This is not a new debate in Germany; we have been having it for months, as this scenario has been crystal evident for a very long time and [Scholz] has been obstructing it effectively for months, at least since the summer.

I believe that the international pressure, the war crimes, the effect and the difference German weapons could make in this war in conjunction with other European deliveries (about 300 tanks will be required to make a real difference), will become so great and irresistible that the German chancellor will eventually change course, but it will take too long.

Due to its post-World War II guilt, Germany has always approached wars with caution.

In accordance with German legislation, purchasers of its armaments are required to get authorisation before transferring them abroad.

This is to avoid the use of German-made weapons in war zones against German interests.

On Friday at Ramstein, around 50 nations agreed to assist Ukraine with billions of dollars’ worth of military equipment, including the armored vehicles and munitions necessary to repel Russian forces.

According to diplomats, European foreign ministers decided on Monday to invest an additional 500 million euros to arm Ukraine. This brings the overall expenditures of the EU to 3,6 billion euros.

Officials of the Russian parliament have warned that states who arm Ukraine risk their own destruction, which would result in a “global catastrophe.”

Vyacheslav Volodin, the head of the State Duma, stated that supplying offensive weaponry to the Ukrainian government would result in a worldwide catastrophe.

Ukraine claims that the heavily armored Leopard battle tanks would give its ground soldiers greater mobility and protection ahead of a fresh Russian attack expected in the coming months, and might provide them with the firepower they need to recapture the initiative.

»Chancellor Scholz is preventing Germany from sending tanks to Ukraine«