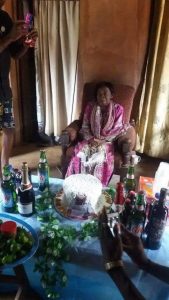 Late Madam Ekwedo, who lost her husband in her prime, over seventy years ago, also lost her only girl child later in life.

However, Ma Ekwedo was able to wade through life by the grace of God, till three months ago when she died at the age of one hundred and one.

Her burial was actually a celebration of longevity, as parishioners of St Mary’s Catholic Church, Nnokwa, Umuada Ahamnonu Nnokwa, her fellow aged men and women, joined her family, relations, friends and those positively touched by her life story in participated in the befitting ceremony.

In a homily during requiem mass organised in her honour at St Mary’s Pro Cathedral Church, Nnokwa, Reverend Father Collins Ogbannu extolled the persevering attitude of the late centenarian, pointing out that her strong faith in God saw her outlive most of her contemporaries, even when she had no offspring of her own to fend for her at old age.

Father Ogbannu recalled how the old woman used to exhibit cheerfulness and treat other people as her own children, adding that such attracted her favours from God and love from relations, even distant towns men and women.

He prayed God to give her soul eternal repose, while tasking the living on faith and positive lifestyles, which will transform them into happy and Godly people.

In an interview during the funeral, the Traditional Prime Minister of Nnokwa, Chief Richard Okelu, now in his eighties, nostalgically recalled when Ma Caro Ekwedo was married into the family, adding that she remained friendly, jovial and a uniting force.

For her youngest surviving brother, Mr John Obijekwu, late Ma Caro Ekwedo was more of a mother to him than a sister, as she was a very industrious woman, kind and generous, thanking all who contributed to her well being and her funeral.

Various groups and societies paid their last respect to the deceased, as well as condolences, while cultural dances and an age-long dance by elderly Church women, known as ‘egwu agadi ndi-uka’, featured at the funeral.