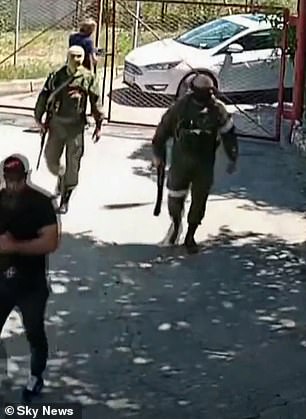 CCTV footage reveals that Russian FSB agents and armed soldiers have infiltrated a Ukrainian orphanage in order to abduct children and send them to Moscow.

According to Ukrainian intelligence, 13,000 orphans as young as babies have been kidnapped and sent to Russia, where they are indoctrinated with pro-Kremlin propaganda about the war.

Volodymyr Sahaidak is the director of an orphanage near Kherson, a region that was formerly under Russian control until a spectacular Ukrainian counteroffensive compelled the Russians to withdraw.

When he realized that Putin’s thugs were advancing, he sent the 52 orphans in his care to local families who took them in despite the risk of being arrested or killed.

The Russian operatives and armed fighters examined the orphanage’s files and computers in search of information on where the fugitives were hiding, as captured on the orphanage’s surveillance camera.

Mr. Sahaidak told Sky News, “We heard Russian propagandists suggest that orphans must be taken to military schools, indoctrinated, and allowed to fight for Russia.”

“It was the most terrifying thing, therefore we began concealing children because we knew they would take them,”

Local households took in up to four orphans apiece to protect them during the Russian takeover, and the invading army never discovered them.

Mr. Sahaidak stated, “It appeared that if I did not hide my children, they would be taken from me.”

The orphanage was completely vacant when Russian agents and armed militants with firearms arrived, as seen by surveillance camera.

During the Russian occupation, local families took in as many as four orphans each to ensure their safety.

However, now that the orphanage was on Russian soil, Vladimir Putin’s men brought 15 children taken in other parts of Ukraine there before bringing them back to Russia when they were forced to retreat.

Oxana, a teacher at the orphanage, stated that troops armed with machine rifles loaded the terrified children into military vehicles.

Natalya Kadyrova, who lives near another orphanage in Kherson, reported seeing children as young as three forcibly removed from their safe haven, despite the fact that the abduction of children is a major breach of the rules of war.

The Ukrainian prosecutor’s office reported that 48 orphans between the ages of three and five were abducted from an orphanage in Kherson and launched an inquiry involving their secret service.

Within hours of Putin’s brutal February invasion, the staff at a children’s hospital in the south began plotting in secret how to save the infants.

In Kherson, southern Ukraine, orphaned children are cared for in the maternity ward of the provincial children’s hospital.

During the course of the conflict in Ukraine, Russian authorities have been accused of deporting Ukrainian children to Russia or Russian-controlled territory to be raised as their own.

Caregivers at a regional children’s hospital in Kherson began falsifying orphans’ medical records to make it appear as though they were bedridden.

Dr. Olga Pilyarska, the chief of intensive care, stated, “We intentionally wrote false information that the children were ill and unable to be transported.”

We feared that the Russians would discover our secret, but we resolved to save the children at whatever cost.

The majority of the abducted youngsters remain unaccounted for.

At the hospital in Kherson, 11 abandoned infants were diagnosed with fictitious illnesses so they wouldn’t have to be transferred to an orphanage where they would be given Russian documents and possibly taken away.

According to Pilyarska, one infant suffered ‘pulmonary bleeding,’ another had ‘uncontrollable convulsions,’ and a third required ‘artificial ventilation.’

A playhouse in the courtyard of the Kherson regional children’s home is filled with toys and a doll.

It was revealed earlier this year that Russia is attempting to place hundreds of Ukrainian children for foster care or adoption with Russian families.

Officials illegally transferred Ukrainian children to Russia or Russian-held territory, lied to them that their parents did not want them, exploited them for propaganda, and gave them Russian citizenship and families.

The Institute for the Study of War, a think group in Washington, asserts that Russian officials are executing a purposeful depopulation campaign in occupied regions of Ukraine and deporting youngsters under the cover of medical rehabilitation and adoption programs.

The purpose of transporting children to Russia, according to Russian authorities, is to shield them from hostilities.

The Russian Ministry of Foreign Affairs has denied reports that the country is detaining and expelling children.

It is asserted that officials are hunting for relatives of orphaned children still living in Ukraine in order to discover possibilities to send them home whenever possible.

In October, Volodymyr Zelensky asserted that more than 1.6 million Ukrainian people had been deported during the war, with many having been stripped of their documentation and dispersed across Russia. He stated, “They are stealing people.”