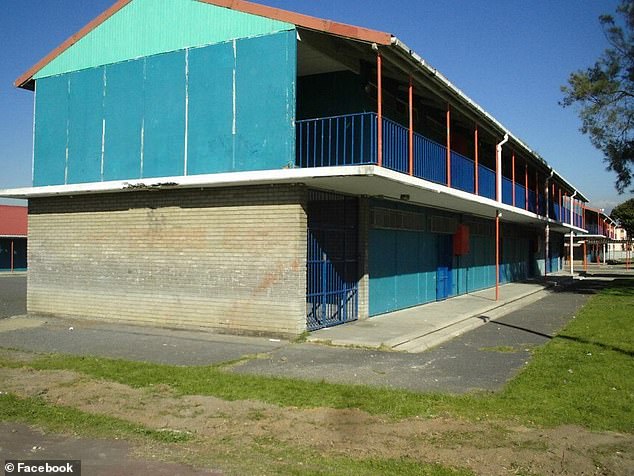 However, as soon as the local educational authorities closed the gates for good and sent the 100 students to neighbouring schools, opportunistic criminals stepped in.

Every brick, window, roof tile, toilet, electrical and plumbing fixture, as well as the blackboards, had been removed within six months.

Before the school was shut down, a Google Earth image showed Uitzig Secondary to be completely intact and servicing the neighborhood.

The red brick and tile school, however, seems to have “vanished” in the same photograph taken a few years later, leaving only the concrete classroom floors in place.

It was an excellent school, but over time, drug gangs grabbed control of the neighborhood, according to a former school caretaker who declined to provide his name out of fear of gang retaliation.

Students started to feel threatened, and there was regular vandalism. The school eventually shuttered entirely in 2019.

I’m not joking when I claim that the robbers broke into the school the day after it was closed and took everything, brick by brick and window by window.

“Where the buildings formerly stood, there was nothing left except the concrete floors, and today it is simply a vacant open area where terrible people congregate,” he said.

When Google Earth images taken a few years apart are compared to one another, the amazing tale of the school that was secretly stolen is shown to be 100% genuine.

Former student Lorna Balata-Peters attested that everything inside the school, as well as the building itself, had been completely demolished after it closed.

“My athletic memorabilia was on the walls, and it is all gone, along with the walls themselves, the roofs, the windows, and even the bricks,” the woman said.

John Isaacs, a street sweeper who formerly attended the school and then sent his kids there, said: “Drugs ruined the school, and we don’t know who took it.

The local drug addicts came here to steal the school piecemeal after the gates were locked, selling all the supplies for just enough cash to get a fix.

People will purchase bricks when they are being marketed for 50 cents each, according to Fareed Jansen of the Manenberg Business Forum.

They view the items not as stolen but as necessities for the construction of homes, the man said.

According to Bronagh Hammond, a spokeswoman for the Western Cape province’s education department, the school was doomed because of “gangsterism and vandalism.”

We put up security guards and barbed wire, but gangs and vandals continued to enter and threaten the instructors and even the guards, she said.

Ultimately, maintaining Uitzig required so many repairs that it was no longer worthwhile and was consuming funds from our other schools.

“Locals were causing so extensive damage to the infrastructure that an engineers’ assessment warned that the students and staff were in risk.”

“Within a few days of the school closing its gates, community members stormed in and took everything that was left,” despite the protection left behind.

Arson, vandalism, and theft are severe issues at schools all around South Africa, and the majority of them need substantial 24-hour security coverage.