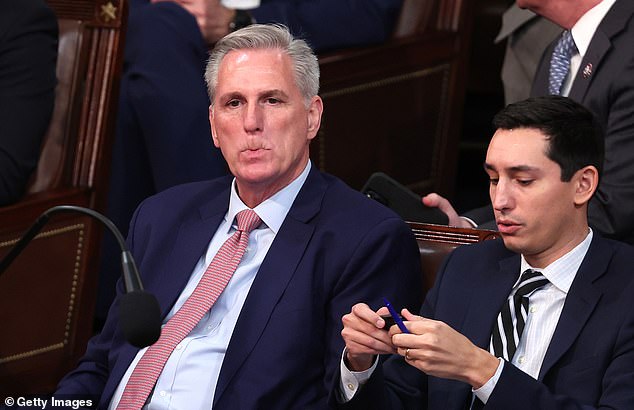 It remains unclear whether the House will vote on a new Speaker on Wednesday, after Kevin McCarthy failed three times on Tuesday to convince Republican dissenters to support his attempts.

McCarthy needs 218 votes to succeed Nancy Pelosi as Speaker of the House; therefore, with 222 Republican members, he can only afford to lose four votes if he wants to win the position.

It is uncertain who Republicans can support, but there is talk that if they don’t choose quickly, Democrats will try to swoop in and secure support for a moderate candidate.

If McCarthy is unable to sway the almost two-dozen members of his own party who no longer want him to lead, DailyMail.com identifies which legislators Republicans could coalesce behind as an alternative to McCarthy as Speaker.

As the lower house prepares to reassemble for additional vote on Wednesday at noon, it is still unclear whether Kevin McCarthy will become the next House Speaker. Tuesday, the Republican Party’s leader fell short by three votes of the 218 required to assume the gavel.

Jim Jordan, vice chairman of the hardline House Freedom Caucus, received 20 votes from Republican dissidents on Tuesday, making him the most likely candidate to replace McCarthy.

Even though the Ohio lawmaker challenged McCarthy for minority leader in the House after the 2018 election, he has always supported McCarthy’s quest for Speaker.

Tuesday in the House, Jordan gave an impassioned statement asking his colleagues to vote for McCarthy.

He has also stated numerous times that he does not desire the gavel.

Representative Matt Gaetz of Florida, one of McCarthy’s holdouts, has advocated for Jordan to pursue the position, but moderate Republicans may find it difficult to support the radical right.

Vice-chairman of the House Freedom Caucus and Representative Jim Jordan are the most likely candidates to succeed McCarthy. Jordan had endorsed McCarthy and stated that he does not want the gavel, but on Tuesday, all dissenters voted for the Ohio member instead of McCarthy.

Even if none of the 20 lawmakers opposed to McCarthy did not vote for the No. 2 House Republican, GOP Whip Steve Scalise is a clear, readily available, and more likely to win support from both moderates and extremists candidate.

Representative Scalise is more associated with the party’s right wing than McCarthy, and he earned favor with McCarthy’s supporters by not challenging him for the nomination last month.

While great attention is paid to House Freedom Caucus members and those adamantly opposed to McCarthy, the votes of those who staunchly support the Republican Leader are equally important.

The Louisiana senator may face the same challenge as McCarthy if he is unable to win the support of rank-and-file members who believe a leadership change is necessary.

Given that he is the No. 2 Republican in the House and might appeal to both conservatives and moderates, Steve Scalise is also an option. Given that he is presently a member of the leadership they wish to shake up, he may not be a good option for holdouts.

Similar to Scalise, Republican Conference Chairwoman Elise Stefanik may garner more support than McCarthy, but she is also a member of the current leadership.

Stefanik, on the other hand, has been in Republican leadership for just over a year and a half, which could make her more palatable to those who oppose the status quo of GOP leadership.

Steanik, who was 30 years old when she was first elected to the House in 2014, was the youngest woman ever elected to Congress.

Although she began her congressional career as a relative centrist, she has recently linked herself with the MAGA wing of the Republican Party, which could damage her standing with moderate Republicans.

Rep. Andy Biggs may have once been considered a viable candidate, but his extreme right-wing views prevented him from gaining sufficient support.

The only reason the ultra-GOP congressman from Arizona is on the list is because he helped lead the original five “Never Kevin” lawmakers into a nearly two-dozen-member campaign.

Representative Andy Biggs has minimal chance of becoming Speaker due to his extreme right-wing views and tight affiliation with former President Donald Trump, whom moderates have been attempting to distance themselves from in recent months.

Biggs ran unsuccessfully against McCarthy for the Republican nomination for Speaker last month.

The North Carolina Republican, who joined the House in 2005 at the age of 29, was once mentioned as a possible future speaker.

In 2017, former Republican House Speaker John Boehner said, “McHenry will one day be the speaker.” McHenry served as chief deputy whip under Boehner.

It appears that McHenry could appeal to Republican instigators, given that he was one in his early career, but he could also garner support from moderates seeking a serious, policy-oriented politician.

Although it is extremely rare, the House rules do not stipulate that a Speaker must be an active lawmaker.

Lee Zeldin’s career as a legislator ended on Tuesday with the adjournment of the 117th Congress, as he chose not to seek re-election to the House but instead to challenge New York Democratic Governor Kathy Hochul.

His vigorous, but unsuccessful, challenge inspired many Republicans, and he might emerge as a dark horse candidate if no other sitting legislator receives sufficient support.

The name Zeldin has been mentioned by several holdouts.

Representative Ralph Norman said that the holdouts may be more interested in a non-member becoming Speaker, but underlined that he was not advocating for Zeldin explicitly.