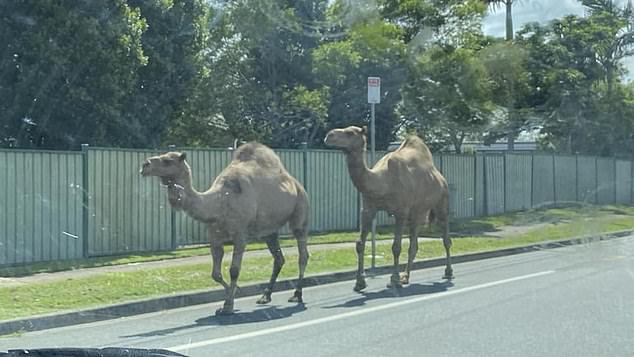 After fleeing from a church nativity scene, three camels have been sighted wreaking havoc on a major thoroughfare.

The Bridgeman Baptist Community Church in Bridgeman Downs, northern Brisbane, verified that the animals had strayed, with three of them spotted strolling along the side of a road passing automobiles.

They were spotted traveling down Albany Creek Road shortly after 10 a.m. on Friday, causing commuters delays on their way to work.

Our camels got a little lost en route to Bethlehem! Now that they’ve returned safely,’ the church stated on Facebook.

The Bridgeman Baptist Community Church in Bridgeman Downs, northern Brisbane, verified that the curious creatures had strayed, with three of them seen roaming along the side of a road past automobiles.

The camels halted traffic, with many drivers stopping to photograph the strange spectacle.

A spokeswoman for the church informed Daily Mail Australia that the camels were part of their Christmas shows and were cared for by Camelot Camels, a local company that specializes in camel rides.

Melanie Fitzgibbon, the camels’ owner, stated that it took roughly 30 minutes to return the mischievous camels.

The camels halted traffic, with many drivers stopping to photograph the strange spectacle. They have been returned safely.

When her husband went to check on them, the dogs had opened the gate.

They were walking slightly ahead of us, but we knew where they were, so it was simply a matter of catching up with them; they’re fast travelers.

Ms. Fitzgibbon reported that the camels had been returned safely and had eaten lunch and slept prior to another Christmas performance.

She stated, “It was definitely something for the commuters to witness.”