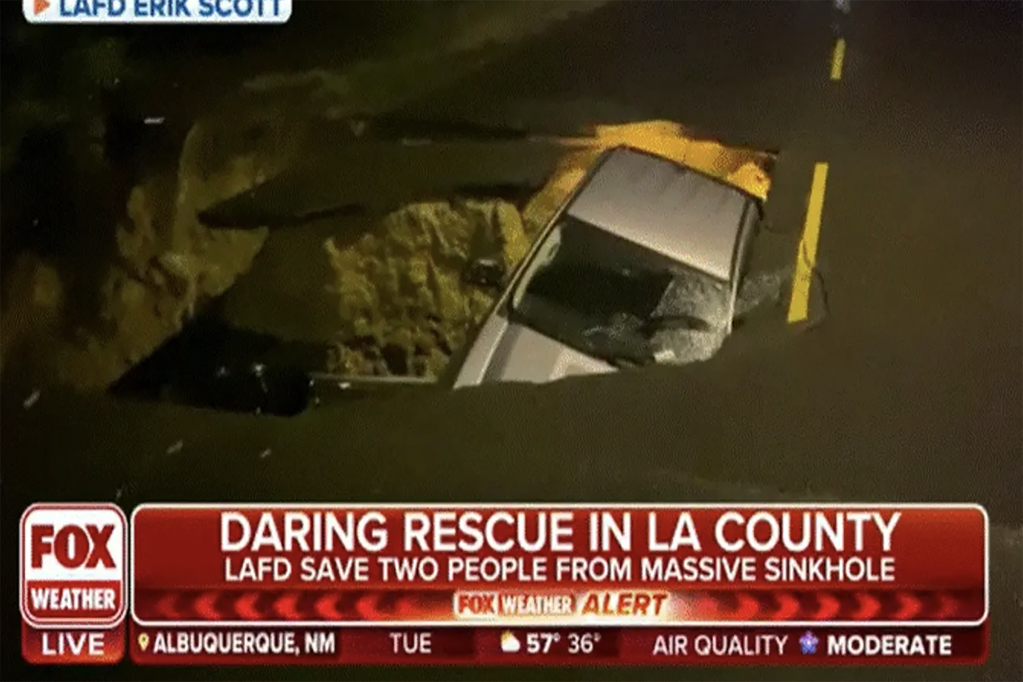 LOS ANGELES – Many sections of California are experiencing life-threatening flooding, mudslides, and debris flows as a result of an onslaught of atmospheric river storms.

On Monday and Tuesday, the National Weather Service received more than 300 reports of widespread flooding across the state of California. While torrential rain saturated the majority of the Golden State, Santa Barbara, Ventura, and San Luis Obispo counties were particularly hard-hit, receiving more than 15 inches of precipitation.

The National Weather Service in Los Angeles reported that 2.73 inches of rain fell in downtown Los Angeles, while 5.27 inches fell in Bel Air, just northwest of the city.

In the foothills of the Sierra Nevada mountain range, particularly in Fresno, Mariposa, and Tulare counties, up to 10 inches of rain was recorded.

The NWS in Los Angeles also said that this most recent atmospheric river storm, which has been dumping persistent rainfall across the region, is now “the most impressive storm to hit the region since January 5–7, 2005.”

Recent storms in California have included a bomb cyclone that wrecked portions of the state with heavy rain, high winds, and pounding waves.

As of Tuesday, the office of California Governor Gavin Newsom reported that the succession of violent storms had claimed the lives of at least 17 people, which is more than the total number of individuals killed by wildfires over the past two years.

The northbound US 101 is closed at mile marker 150, at Sheffield Drive, and from Winchester Canyon to Highway 1 near Gaviota. The southbound 101 at Milpas Street is closed. All due to flooding and road debris. Photos taken in the morning at Gaviota, where work is being made. pic.twitter.com/NTr7xF7IXj

On Monday, reports indicated that a small kid was washed away by the roaring floodwaters in San Luis Obispo County. Rescuers were able to extricate his mother from the vehicle she was driving, but he was nowhere to be seen.

According to FOX 11 in Los Angeles, the boy’s shoe was located almost seven hours before the search was called off due to dangerous weather.

Severe thunderstorms are predicted to bring heavy rain and other potential severe weather to localized areas. The timing between storms will be crucial for river levels to decrease between rises, and more regions may be exposed to an increased danger of flooding with each subsequent storm. pic.twitter.com/no00Sr2zdt

According to Tony Cipolla, a spokesperson for the San Luis Obispo County Sheriff’s Office, the youngster has not yet been certified deceased.

The torrential rainfall also caused rockslides, mudslides, and debris flows across the state, resulting in the closure of multiple roads and highways.

US 101 was stopped near Gaviota due to flooding and significant volumes of debris on the route, according to Caltrans

It is unknown when the roads will be reopened, though work is currently being performed to that end.

Through Wednesday, the FOX Forecast Center predicts an additional 2 to 6 inches of precipitation in the Sierra Nevada foothills and an additional 1 to 3 inches over the California coastal ranges.

On Thursday, a second atmospheric river storm will strike California, but according to the FOX Forecast Center, it won’t be as powerful as the first storm of the week, which flooded huge sections of the state with heavy bands of rain.

Due to the state’s saturated soils, any extra rainfall will produce extensive floods and increase the likelihood of mudslides and debris flows.

Monday saw the evacuation of thousands of residents due to significant flooding, and on Tuesday morning, the Monterey County Sheriff’s Office issued a fresh evacuation order for residents in low-lying regions along the Salinas River. This order to evacuate is in effect until further notice.

On January 10, 2023 in San Francisco, California, firefighters prepare to remove a massive tree branch that has fallen onto a parked vehicle.

“We want to ensure that everyone is prepared for what lies ahead,” Governor Newsom said at a press conference on Tuesday afternoon. We anticipate that these storms will persist in a variety of forms through the 18th.

Residents in San Ardo and parts of San Lorenzo Creek between San Lorenzo Park Road and Highway 101 have also been advised to evacuate.

Because of flooding, the entire community of Planada, California, has also been asked to evacuate. According to the Merced County Sheriff’s Office, deputies are evacuating residents door by door.

After a storm swept through the neighborhood on January 10, 2023 in San Francisco, California, Department of Public Works employees cut up a tree that fell on an SF MUNI bus.

However, some evacuations have been eased.

As of 11:20 a.m. local time on Tuesday, the Sonoma County Sheriff’s Office tweeted that evacuations along the Russian River have been lifted. Santa Barbara County dropped orders as well.