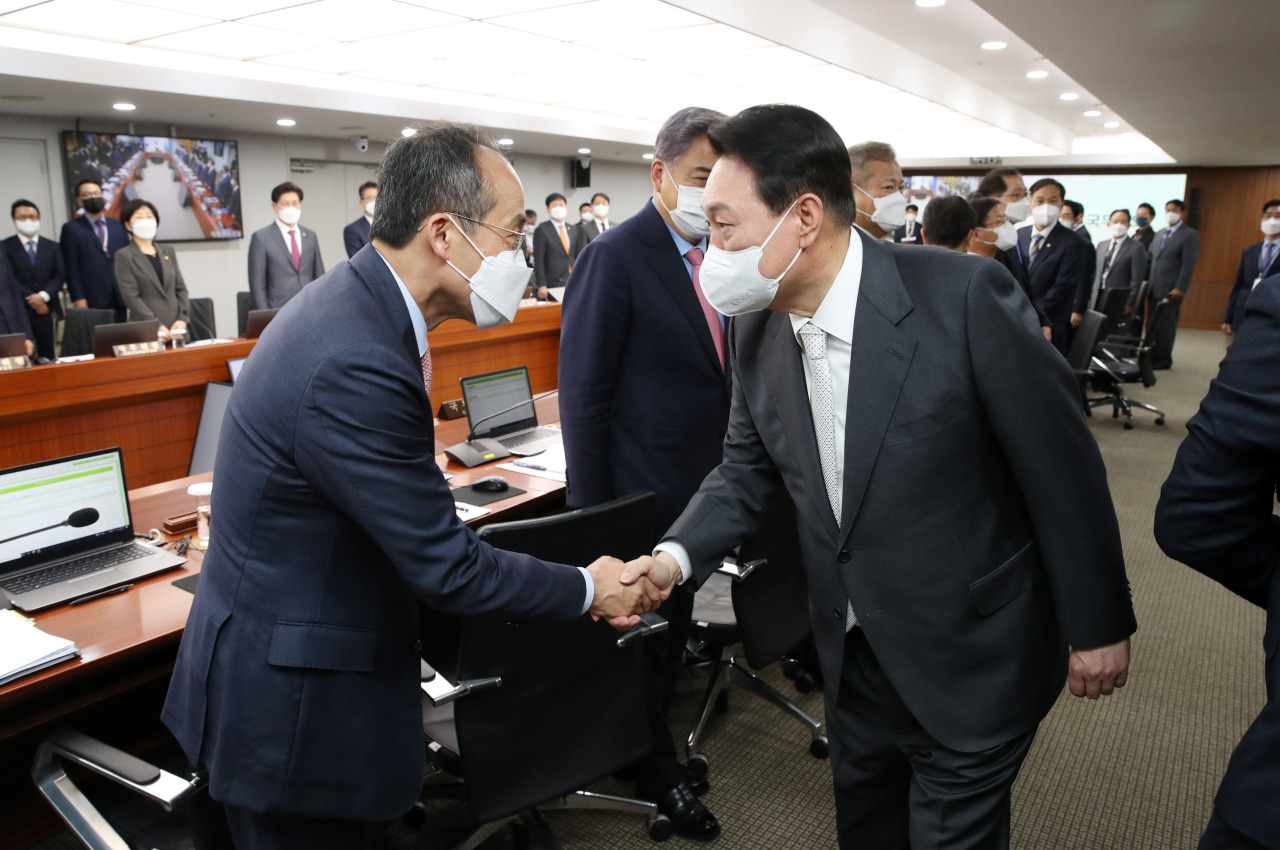 The Cabinet endorsed the supplementary budget worth 59.4 trillion won ($46 billion) in its first meeting under the Yoon Suk-yeol administration in Seoul on Thursday. The budget, drawn up by a group of ministries, is mostly aimed at supporting the self-employed and microbusiness owners.

But the real scale of the extra budget in terms of utilization for payouts for the people and other segments of the economy would stay at 36.4 trillion won, given that 23 trillion won would be granted to local governments under relevant laws, according to the Ministry of Finance and Economy.

Of the 36.4 trillion won for feasible utilization, 23 trillion won will be used to support 3.7 million self-employed and microbusiness owners. The government will give payouts of 6 million won to 10 million won to each to compensate for their financial loss amid the pandemic, in consideration of sales and damages by industry.

When quarantine support payouts of 4 million won are included, some businesses will be paid up to 14 million won, the Finance Ministry said.

About 1.7 trillion won will be provided as bailout and there will also be state-led loans on discounted interest rates for small merchants and the self-employed.

Another 3.1 trillion won will be spent as payments to the underprivileged and those who suffered from job insecurity due to two years of social distancing. The payments are also aimed at stabilizing consumer prices, which have grown over 4 percent for the two consecutive months.

“Up to 1 million won will be paid to low-income, four-member households each temporarily, and 750,000 won to single-parent households each,” said the ministry.

The budget also involves payouts for several industries — tourism, air carriers and exhibition and performing arts — which had been excluded from loss compensation during the previous administration.

Among the support package are payments to those employed in the agricultural and fisheries industries, which are undergoing a variety of difficulties amid spiraling consumer prices.

At a news briefing later in the day, Deputy Prime Minister and Finance Minister Choo Kyung-ho said that “the economy has faced three negative factors: rising inflation, slowdown in the economic recovery and expanding global risks.”

He said the economic policy team of the Yoon government would certainly overcome the crisis, people have faced, starting from the active implementation of this supplementary budget. “Those, (who suffered financial loss), have already faced a matter of survival beyond the former threat of livelihood.”
.
The budget bill will be sent to the National Assembly for approval.

Meanwhile, an ongoing issue is expected to be fiscal soundness from the supplementary budget’s large-scale allocation. This is the second round this year, following the 14 trillion won budget in January under the previous Moon Jae-in administration.

Under the scheme, the fiscal deficit will reach 68.5 trillion won, which is the state’s revenue of 608.3 trillion won minus its expenditure of 676.7 trillion won, the press release indicated.

In this situation, the national debt will come to 1,067.3 trillion won, with the ratio of national debt to gross domestic product posting 49.6 percent. In contrast, the ministry claimed the ratio is a decline, compared to 50.1 percent during the first round of the extra budget.