Skip to content
Go Home «» News «» World News «» Buzz Aldrin, 93, the second man on the moon, gets married for the fourth time to his longtime girlfriend on his birthday 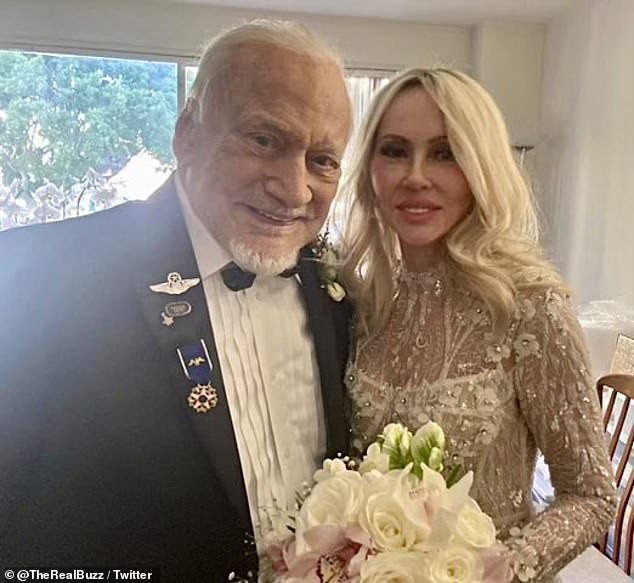 Buzz Aldrin, the second man on the moon, is marrying for the fourth time on his birthday.

Mr. Aldrin, who turned 93 on Friday and was a member of the historic first moon landing mission, sent the tweet to his new spouse, who is 30 years younger.

‘On my 93rd birthday & the day I will also be honoured by Living Legends of Aviation I am pleased to announce that my longtime love Dr. Anca Faur & I have tied the knot. We were joined in holy matrimony in a small private ceremony in Los Angeles & are as excited as eloping teenagers.’

Dr. Faur, 63, is the Executive Vice President of Buzz Aldrin Ventures LLC, a position she has held since 2019, according to her LinkedIn profile.

She has a doctorate in chemical engineering from the University of Pittsburgh and formerly served as treasurer of the California Hydrogen Business Council.

The second man to set foot on the moon had three children with his first wife, Ms. Archer: James, Janice, and Andrew.

From his daughter Janice, he has one grandson, Jeffrey Schuss, as well as three great-grandsons and one great-granddaughter.

In 1998, Mr. Aldrin formed the ShareSpace Foundation, a non-profit organisation that promotes the extension of crewed space travel. Mr. Aldrin resigned from NASA in 1971.

Mr. Aldrin said that after entering the annals of history with Neil Armstrong, he battled through a period in which he did not know what he should be doing with his life.

He had struggled with depression and alcoholism but has been clean for over 40 years.

Five years ago, he also sued Andrew and Janice, two of his children, as well as his former business manager Christina Korp, saying that they stole money from him and slandered his legacy by claiming he had dementia and Alzheimer’s disease.

In 2019, he dismissed the action when his two children withdrew their demand for legal guardianship.

In 2007, Aldrin joked that the g-forces he was subjected to in space “caused a sagging jowl that needed some attention,” while in 2016 he was had to be evacuated from the South Pole due to illness.

The retired astronaut has also remained in the public spotlight by making guest appearances on popular American television programmes, including The Big Bang Theory, The Simpsons, and 30 Rock.

Even the Toy Story character Buzz Lightyear was named in his honour.

Aldrin has published many books, but in recent years he has advocated for the settlement of Mars.

The 92-year-old man said that a “great migration” is required not just for the sake of discovery, but also for the continued existence of the human species.

»Buzz Aldrin, 93, the second man on the moon, gets married for the fourth time to his longtime girlfriend on his birthday«