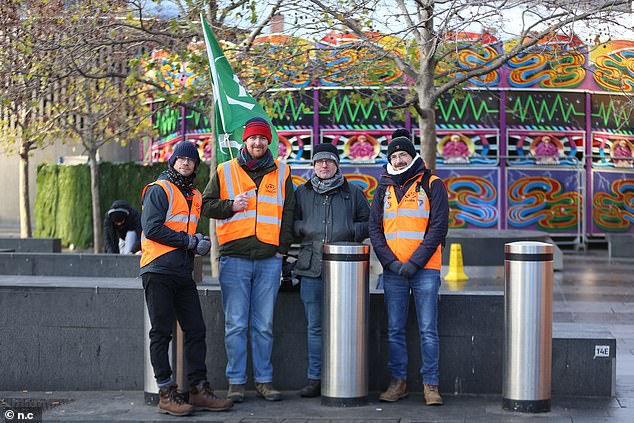 As Britain prepares for another Covid-style lockdown with the holiday season already in ruins for the third consecutive year and businesses facing billion-dollar losses, public support for Mick Lynch’s crushing Christmas strikes is eroding, even among his own members who will lose up to £5,000.

Millions of employees must now work from home, some of them until 2023, as a result of union bosses like Mr. Lynch, who earns £84,000 a year, closing down essential services until January 10. According to two recent polls from the polling company Ipsos MORI, support for rail strikes is declining while fervent opposition is rising.

Support for RMT union leader Mick Lynch on the picket lines appears to be fading as a cold snap sweeps the nation, according to a poll that shows support for the rail strikes has dropped by eight points since October.

As thousands of members at Network Rail and 14 train operating companies strike on day two of the RMT’s rail walkouts over pay, jobs, and conditions, half of Britain’s rail lines are shut down the whole day. Services won’t be available in many areas of the nation, including the majority of Scotland and Wales.

Royal Mail employees have joined the walkouts by rail workers, and nurses are preparing to engage in unprecedented industrial action that, in the opinion of experts, endangers lives amid claims that chemotherapy appointments have been cancelled as 100,000 medical professionals stay at home on Wednesday.

More than half of the population (56%) opposes rail strikes over the holiday season, compared to 33% who support them, suggesting that popular support for the ongoing industrial action is waning.

From +21 in October to merely +13 in December, public support decreased by eight points, and more walkouts were reported during this period.

According to union data obtained by the Telegraph, less than 10,000 out of 115,000 staff refused Network Rail’s offer of a 9% wage raise.

Although Mr. Lynch has emphasized that the industrial action has overwhelmingly strong support, this support may be waning.

According to the statistics, 9,772 RMT members chose to reject the 9% salary settlement out of the 18,540 who cast ballots.

For the second time this week, ministers will have an urgent Cobra meeting to discuss the crisis, which will endure for almost a month.

Due to the Covid epidemic, Britons were forced to forgo seeing loved ones over the Christmas season in 2020 and 2021. Now, due to union barons’ decision to shut down essential services until January 10, they risk having to do the same.

Businesses have claimed that the current postal strikes are costing them more than the pandemic did; one has predicted losses of £1 million at the busiest shopping season of the year.

Christmas cards and packages worth thousands of dollars have started to accumulate as Royal Mail employees get ready to form picket lines outside of sorting and delivery operations.

On December 23 and 24, there will be two more Royal Mail walkouts in a protracted dispute about wages, employment, and working conditions.

Due to the strike, Royal Mail has moved forward the deadlines for sending out Christmas cards.

The wave of strikes dubbed the “December of discontent” is causing many hardships for hard-working Britons as Christmas approaches.

Business owners claim that key services are frequently disrupted during the holiday season, one of the busiest times of the year.

Postal strikes are costing Thortful, according to managing director Pip Heywood, between £30,000 and £50,000 a day.

Around 80% of the products sold on the online greeting card marketplace are shipped via Royal Mail, which is a significant source of its income.

Speaking to BBC Radio 4’s Today program, Ms. Heywood said: “Christmas trading has been severely impacted, and each day of the strike is costing Thortful between 30 and 50k per day.”

When we had to inform customers of the longer delivery windows, there were sharp declines in sales, and Thortful customer enquiries tripled.

Fortunately, our consumers are aware of our reputation for dependability, although delivery reliability is currently considerably poorer than it was even during Covid.

“It means we’ve had to staff up to safeguard our consumers, so it’s not just impacting income, it’s adding expense and also doing damage to our brand,” the employee said.

We anticipate [the strikes] will cost Thortful in the neighborhood of £1 million, she continued.

Business owner Gaynor Lockwood Edwards of Sheffield stated that “things are really dismal at the moment.”

Due to growing prices and stunted sales as a result of industrial action, Ms. Lockwood Edwards, the owner of Quirky Cactus, which sells handmade crotchet presents, expressed concern that her company might not make it through the winter.

Sales were down 64% this December compared to previous, she added.

Due to the cost-of-living crises and postal strikes, which are further pressuring companies like mine, online sales have been scarce.

I recently registered for an overdraft and started using a credit card in preparation for a really bad January, she continued.

As a result of the threatened postal dates for Christmas, images have surfaced showing the mass accumulation of Christmas cards and packages outside Royal Mail facilities.

According to accounts, rats and foxes have been drawn to the mounds of undeliverable packages left outside the Royal Mail depot in Bristol, where they have begun to tear through them.

The Telegraph was informed by a union member working there that “the parcels have now attracted rats and other animals, including a fox.”

‘Things are being left out in the open at Bristol Mail Centre and I believe it’s the case that rodents and other animals are having a go,’ a different local CWU officer told the publication.

In a long-running dispute over pay, jobs, and conditions, hundreds of members of Network Rail and 14 train operating firms went on strike for a second day.

The walkouts have had a devastating effect on the economy, leaving normally bustling city centers desolate over the holiday season.

Millions of individuals were compelled to work from home, dealing additional damage to pubs, clubs, and restaurants in the form of lost profits.

The walkout, which was part of a series planned over the holiday season, cleared bustling high streets of shoppers and employees yesterday in cities like London, Manchester, and Leeds. Christmas Eve, one of the busiest travel days of the year, was also affected.

Hospitality executives issued a warning that the sector anticipates losing £1.5 billion in sales as a result of postponed holiday parties.

»Business loses £1M due to Royal Mail strikes throughout Christmas«