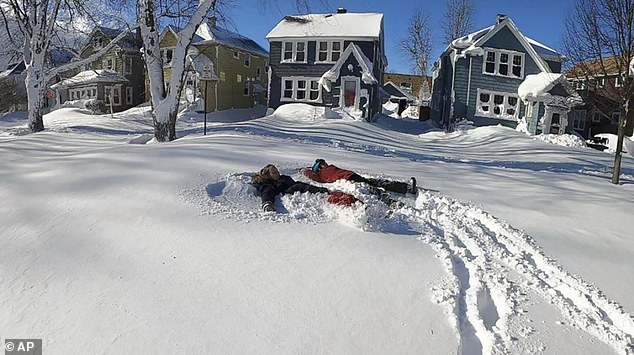 As forecasts predict “life-threatening” levels of cold on Christmas Day, plummeting temperatures have caused fountains and houses to ice over.

The National Weather Service has issued a warning that, in certain locales, going outside might cause “frostbite in minutes.”

As Buffalo EMTs struggle to reach thousands of people who are stranded for Christmas due to the catastrophic winter storms, at least 32 deaths have been reported around the nation.

A three-vehicle incident on an interstate highway in Ohio on Saturday claimed the lives of four individuals, adding to the deaths that have been reported in Colorado, Kansas, Oklahoma, Nebraska, and New York.

Nearly every state in the US is experiencing blizzard conditions as a result of the bomb-cyclone, and millions of people in New York City have been urged to conserve electricity.

Four of the seven fatalities in Buffalo were discovered by emergency personnel on Christmas Day, frozen in their vehicles or in snow banks.

In their houses, another two persons had medical crises, but they were unable to be rescued since emergency personnel could not get to them due to bad weather.

Due to the extreme cold, which has increased demand on gas pipelines, ConEdison encouraged its four million customers to save energy until “further notice.”

They issued a warning that the request to dial down the heat would impact 3.5 million electric users and 1.1 million natural gas customers.

Winds in Western New York have reached 70 mph, and blizzard warnings are in effect for the counties of Niagara, Orleans, Erie, and Genesee until 7 a.m. on Sunday.

Between Friday and Saturday, emergency personnel in Buffalo performed at least 50 rescues, among them a young kid.

I experienced the Blizzard of ’77, according to Erie County Sheriff’s Department Chief Brian Britzzalaro. It gets worse.

With heavy snowfall, lakefront flooding, and whiteout conditions, Wyoming, Chautauqua, and Cattaraugus counties are under a winter storm warning that will last until Monday.

As the bitter winter blasts the city, there have been cancellations at Buffalo Airport, leaving many passengers stuck and some even freezing inside their houses.

Mass floods had occurred in Lake Erie, turning a restaurant into an ice palace as spray from the beach impacted the whole structure.

As of 4 p.m. on Saturday, more than 25,000 customers in Erie County without electricity, and more are certain to suffer as the nation is battered by terrible weather.

The greatest place you can be is at home, safe, officials have advised residents, and a driving restriction has been implemented to safeguard the community.

There has been a rare freeze spray warning issued for Chautauqua and Erie counties until 4 p.m. on Sunday due to the lake’s infrequent tendency to whip up freezing spray for people on the shore.

According to the National Weather Service, staying outside in certain places might cause frostbite in a matter of minutes.

If you must travel or be outside, wear in layers, cover as much exposed skin as you can, and keep winter safety kits in your cars to prepare for the harsh cold.

As residents in Tonawanda, Erie County, struggle with a power outage, homes have been completely covered in sheets of snow up to six feet deep.

The violent storm caused two golf domes in Buffalo City to collapse, which resulted in their destruction.

Almost every fire engine in the city, according to New York Governor Kathy Hochul, was stuck in the snow on Friday. She urged citizens to “bundle up, stay home, and remain safe this weekend.”

1.9 million clients of National Grid, which serves consumers in Massachusetts and New York, are being asked to use less natural gas until Sunday afternoon in Brooklyn, Queens, Staten Island, and Long Island.

The snow bomb caused tens of thousands of flights to be canceled over the course of the previous week, forcing the closure of New York’s international airport.

In the midst of the snowstorm, thousands of passengers in Seattle were forced to spend hours on airplanes, with at least 3,000 flights already being canceled on Christmas Day.

Hundreds of thousands of homes and businesses were left without electricity in Seattle, and millions more people were placed on edge due to the risk of blackouts.

After being stopped in the snow, the American Medical Response of Western New York also experienced stolen emergency vehicles.

AMR logos were on a Chevy Tahoe that was stranded in the snow less than a mile from the company’s headquarters.

The truck was dug out by a loader dispatched by the authorities, but by the time they got there, it had been stolen, prompting a caution to the public not to approach it if they saw it.

Police in West Seneca issued a stay-inside warning as they shared video taken in the Wegmans parking lot, which showed the automobile being whipped about by the ferocious snow.

Officers’ sight was severely limited since they couldn’t see out of their car’s glass due to the storm that had gathered around them.

Thousands of flights have been canceled due to the storm, which has spread from the Great Lakes near Canada to the Rio Grande on the Mexican border.

If Idaho drivers must travel while the freezing rain warnings are in effect, they are advised to use “great care.”

Jackson, Mississippi’s water system, which largely failed in late August, was under ‘fluctuating’ strain on Saturday when it was very cold.