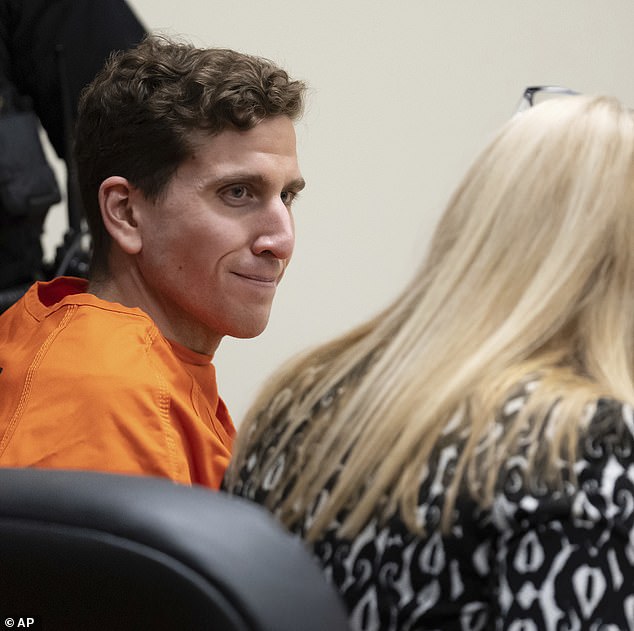 Bryan Kohberger appeared in court in Moscow, where he was formally charged with the deaths of four University of Idaho students, less than an hour after bombshell police case files revealed he visited the area around their residence 12 times before to the murders.

For the brief hearing, Kohberger, 28, wore an orange jumpsuit with the words ‘Latah County’ and remained silent as the charges – four counts of first-degree murder and one count of burglary – were read out.

He spent the most of the 10-minute hearing staring at Judge Megan Marshall as she gave him his rights and the five offenses, answering ‘yes’ when asked if he understood each one.

Kohberger remained calm throughout, only becoming irritated as the final count was read – the murder of Ethan Chapin, for which he faces life in prison or the death penalty. Later, he grinned at his defense lawyer.

Kaylee Goncalves’ family was also in court, with her mother shaking her head and sobbing as the homicide accusation against her daughter was read out.

The session ended with Kohberger being denied bond and Judge Marshall scheduling a status conference for January 12 to decide whether or not to hold a quick preliminary hearing.

Kohberger, who is now back in his Latah County Jail cell, has also been barred from contacting the victims’ families or the two surviving roommates.

Outside of court, Shanon Gray, the Goncalves family’s attorney, stated, ‘It was an emotional moment for the family seeing the defendant for the first time, and the family will be in this for the long haul.’

The appearance came shortly after Latah County released an affidavit containing new details about the investigation, including Kohberger’s frequent visits to the area around the murdered students’ home, his being seen by a roommate, and his DNA being found on a brown leather sheath for a Ka-Bar knife left next to the bodies of victims Madison Mogen and Kaylee Goncalves, both 21.

According to the affidavit, Ethan Chapin, 20, and Xana Kernodle, 20, were discovered on the second floor, with Xana slumped down on the floor of her bedroom.

According to the paper, surviving roommates Dylan Mortensen and Bethany Funke did hear something, with Mortensen telling cops she heard Goncalves say “there’s someone here” at 4 a.m.

Ten minutes later, she heard a thud and screaming from Xana’s room and a male voice saying ‘it’s ok, I’m going to assist you’.

A dog was filmed barking loudly on a neighbor’s surveillance camera around 4.17 a.m. Mortensen said she opened her bedroom door again at the same time and witnessed a tall male with bushy eyebrows go through the sliding glass doors at the back of the house.

She recalled being ‘stuck in shock’ when the black-clad male approached her and locking herself in her room after he left.

Later, a shoe print was discovered outside her door.

According to the affidavit, Kohberger’s white Hyundai Elantra was frequently captured on camera near the scene before being seen driving fast away from the property towards Pullman at around 4.20 a.m.

The vehicle was quickly linked to Kohberger, and police noted the resemblance between his appearance and Mortensen’s description of the burglar at the rented home.

The shocking new facts came less than a week after Kohberger was caught on December 30 at his family’s home in Pennsylvania’s Pocono Mountains.

Following a brief hearing on Tuesday, Kohberger agreed to be extradited to Idaho and arrived at the Pullman-Moscow airport on Wednesday evening.

According to the jail roster, Kohberger was brought in a police convoy to the Latah County Jail 15 minutes away and booked in at 6.44pm.

A new mugshot, which accompanies the listing, shows him sat inside the jail, clad in an orange top and trousers, staring impassively at the camera.

Kohberger has stated that he had nothing to do with the heinous knife murders of kids Madison, Kaylee, Xana, and Ethan, and is set to enter a not guilty plea.

The 28-year-old had earlier informed his Pennsylvania lawyers that he was “surprised” to have been detained and that he “looks forward to being exonerated” when the matter goes to trial.

»Bryan Kohberger, Idaho murder suspect smiles in court as murder charges are read out to him«