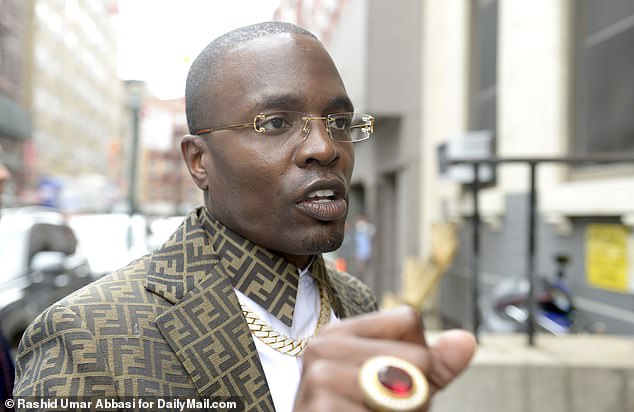 Lamor Miller Whitehead, Brooklyn’s bling bishop, claimed in a new interview that he arranged the surrender of suspected subway gunman Andrew Abdullah to ‘his mentor’ Mayor Eric Adams, but that the arrangement broke apart when city marshals ‘bum-rushed’ the suspect outside his lawyer’s office.

When Abdullah, 26, came at the Legal Aid Society’s Downtown office on Tuesday, he was detained.

Abdullah is charged with the unprovoked subway shooting of Goldman Sachs researcher Daniel Enriquez, 44, as the train crossed the East River into Manhattan on Sunday.

The Fendi-wearing pastor, founder of the Leaders of the Tomorrow International Church in Canarsie, previously said that he was ‘hurt’ that police denied Abdullah his ‘integrity’ by not allowing him to turn himself in directly to Mayor Adams.

The alleged gunman’s lawyer refutes the Whitehead’s account, saying that Whitehead was not crucial to the suspect’s surrender.

The clergyman, who served 10 years in state prison for taking part in a $2 million identity theft scheme, says that the gunman’s aunt, who is one of his parishioners, called him weeping and begging for his help for her nephew who police identified as the prime suspect in the slaying, according to the New York Post.

‘His aunt was crying and they needed me to help them through the process. They didn’t know what to do. I told them first of all, he needs to surrender,’ he told the paper.

Abdullah’s mother said that she had spoken to detectives already, but had not set up a plan for her son’s surrender, according to Whitehead.

He said that they then talked to Abdullah again and he agreed to turn himself in.

‘They spoke to him and said that they would call me back and then they called me and said, ‘We trust you bishop. He’s going to surrender.’ I asked them if they had an attorney and they said they were working with legal aid,’ the Post reported.

The well-appointed clergyman then dialed the mayor, who Whitehead said he’s known for years.

‘[Adams] said, ‘All right, this young man is alleged to have committed a heinous crime.’ He said he would support me in whatever had to happen for this young man to surrender. He trusted what I had put in place,’ the high-rolling holy man told the paper.

Whitehead said that he was going to bring Abdullah to the 5th Precinct stationhouse  in Manhattan’s Chinatown, where Mayor Adams would be to witness the surrender.

‘The mayor was going to be at the 5th Precinct, because that’s what I set up with the mayor,’ Whitehead explained to the post.

He said that he felt betrayed by the cops.

‘I wanted him to walk in as a man of integrity,’ he said of Abdullah, but the NYPD interfered with his plan.

‘I wish the police department would have done it a little different and allowed him to turn himself it because this is what pastors do, this is what we do.  It really hurts me because I thought that we had a relationship,’ he told the Daily News.

The mayor was not at the precinct, nor at the Legal Aide offices for the arrest.

Whitehead arrived to the stationhouse with his Rolls Royce when the suspect was brought in for booking.

The pastor has made many claims in the past that have not held up the scrutiny.

Whitehead said his father gave Adams the idea to start a civil rights group, eventually called 100 Blacks in Law Enforcement Who Care, when the mayor was a police officer.

Whitehead continued to work with Adams while he was the Brooklyn Borough President.

The pastor founded the Brooklyn-based ministry, registered as a for-profit business since March 2014, the year after he got out of his five-year prison term.

Whitehead has been active in raising funds for it through self-created youth mentorship programs that have been rebuffed by NYPD and the Brooklyn District Attorney’s Office.

‘There was never any partnership or initiative together with him and this office,’ DA spokesman Oren Yaniv told The New York Post.

The NYPD and Brooklyn Chamber of Commerce have also denied the existence of Whitehead’s initiatives after the pastor claimed to be working hand-in-hand with the two organizations.

NYPD spokesman Lt. Grimpel once said there was no such thing as a mentorship program involving kids shadowing different NYPD officers at a sports day organized by the ministry and hosted by a former New York Giants player in Von King Park.

Whitehead is also said to have an outstanding loan of $261,000 to Monterey Symphony conductor Maximo Bragado-Darman, according to a 2009 lawsuit. The bishop used to work as a mortgage broker for the classical music figure.

‘[Whitehead] signed a note and a promise and never paid back the money,’ Bragado-Darman’s lawyer, Todd Houslanger, once told The New York Post. ‘I’m trying to get him to pay my client’s judgment, and it’s increasingly difficult and frustrating.’

Whitehead, who has been seen driving around Brooklyn in a Bentley and in a Maserati, was once sued by a former volunteer for Adams’ 2007 campaign for a seat in the New York Senate.

The former volunteer, Brian Etta told the New York Post: ‘I’m surprised from what I know about Eric [Adams]…that he would have a guy like Lamor Whitehead connected in any way, let alone closely.’

He filed a lawsuit against Whitehead 15 years ago, accusing him of stealing $19,000 from the sale of a home in Brooklyn, but then dropped it after finding out that the pastor had already been in jail at the time for another offense.

Whitehead claims his innocence in both lawsuits, of which he says were ‘handled in court and have been dealt with.’ He was ordained as a bishop in January 2016 after becoming a pastor two years earlier.

Since the creation of his ministry in 2013, Whitehead has been publicly backed by Adams who once described as his ‘good friend and good brother’ at Wingate Park back in August.

The bishop’s mother has also been awarded an honorary citation by the mayor at Borough Hall and rapper Foxy Brown, Whitehead’s cousin, was given an honorary key to Brooklyn in February.

Whitehead was once asked by a reporter about his youth guidance programs in detail. The pastor repeatedly answered: ‘Why you want to know that?’, according to the New York Post.

Whitehead has recently claimed that his ministry has ‘never solicited funds,’ but the organization’s website included a ‘donate’ button until a few weeks ago. It has also refocused its mission on its services rather than on its youth programs, which was what was initially promoted online, the New York Post reported.

In 2015, Whitehead was accused of physically abusing his then seven-year-old son, according to a release report in relation to a parole violation.

The claims were dropped after no evidence of assault was found, according to the State Department of Corrections and Community Service.

Whitehead was arrested later that year in Uniondale, Long Island, for violating an order of protection, the Nassau County Police said. Whitehead has repeatedly denied that he would ever beat his son. All charges related to the incident were eventually dismissed.

Mayor Adams has often sought advice from the clergyman on social issues and no undeclared funds were given to the Leaders of Tomorrow founder.

A spokesman from Adam’s previous administration as Borough President of Brooklyn once said: ‘Borough President Adams has been invited to or served as co-host for several events organized by Bishop Whitehead that target at-risk youth.’