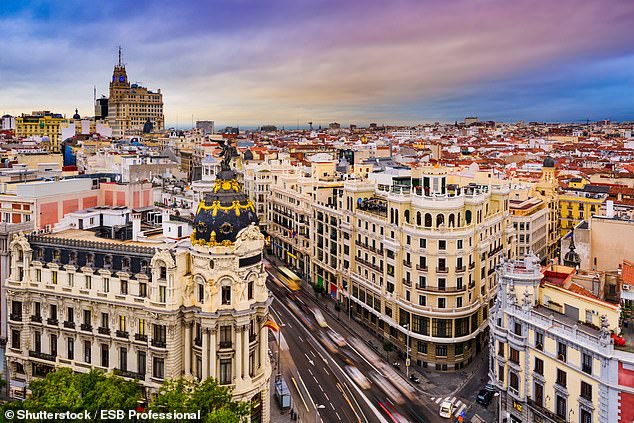 Furious British expats have blasted Spanish bureaucrats after they were banned from driving in Spain following a failure to reach a post-Brexit agreement on UK driving licences.

From today, tens of thousands of Brits living in Spain are banned from using their UK driving licence on Spanish roads – but the change does not apply to holidaymakers who are exempt from the new rule.

According to USwitch, passing your driving test in Spain is almost double the cost in the UK and averages between £700 and £1100.

Although the driving lessons are slightly cheaper, taking your theory is £50 more expensive than the UK and Spanish tests also require registration fees alongside a copy of your health documents.

One user on Twitter, known as Philip, said the new policy was yet another ‘obstacle’ for Brits who work in Spain or want to retire – whilst another user added it was stopping them from ‘continuing their work’ with a dog charity.

One user said: ‘UK driving licences are now not valid for drivers in Spain. This means I can’t go to work – nor can I continue my work with a dog charity here in Tenerife!

‘It’s absolutely ridiculous that you’ve tried to change it prior to Brexit!’

Until now, Britons living in Spain have been able to use their DVLA-issued licences. Every other European country has agreed a post-Brexit deal.

Tory MP Sir Iain Duncan Smith criticised the Spanish authorities, saying: ‘It’s a case of “Manana, manana [tomorrow, tomorrow]”. It’s time they pull their finger out and do what they agreed.’

A UK Government source said: ‘This could go on for a week or it could be longer. It should be temporary but we don’t know how temporary. In the meantime, British residents living in Spanish hill villages won’t be able to drive a car.’

A Foreign Office spokesman said: ‘An agreement to swap UK driving licences for Spanish licences has not yet been reached.

‘From May 1, UK licence holders who have been resident in Spain for more than six months and did not exchange their licence during the transition period will no longer be able to drive legally in Spain. We have agreed to rapidly accelerate talks and are urging the Spanish Government to bring forward interim measures.’

Until a deal is struck, UK expats will need to obtain a Spanish driving licence before getting back on the road.

Several British expats have since taken to Twitter to complain about the ‘backwards’ policy that has left many unable to get to work next week.

One user added: ‘Another Brexit benefit. Anyone who manages to pass the stringent financial requirements to retire to Spain will have to retake their theory and practical driving test to enable you to drive.’

Malaga-based Sam Britton-Beese said: ‘It’s ridiculous. Our application for residency was still in process before the deadline so we couldn’t register to exchange.’

Linda Rogers, originally from Coventry, said: ‘Our house is in the mountains and nothing is close by – I’ve tried to get into a driving school but nothing is available.’

The DGT, the Spanish equivalent of the DVLA, and Spain’s ministry of interior, were approached for comment last night.

Holidaymakers on all-inclusive packages are being restricted to six alcoholic drinks a day at hotels in parts of Ibiza and Majorca.

Under new rules announced earlier this year in a bid to reduce anti-social behaviour, only three tipples are allowed at lunch and three at dinner, with guests having to pay extra if they want more.