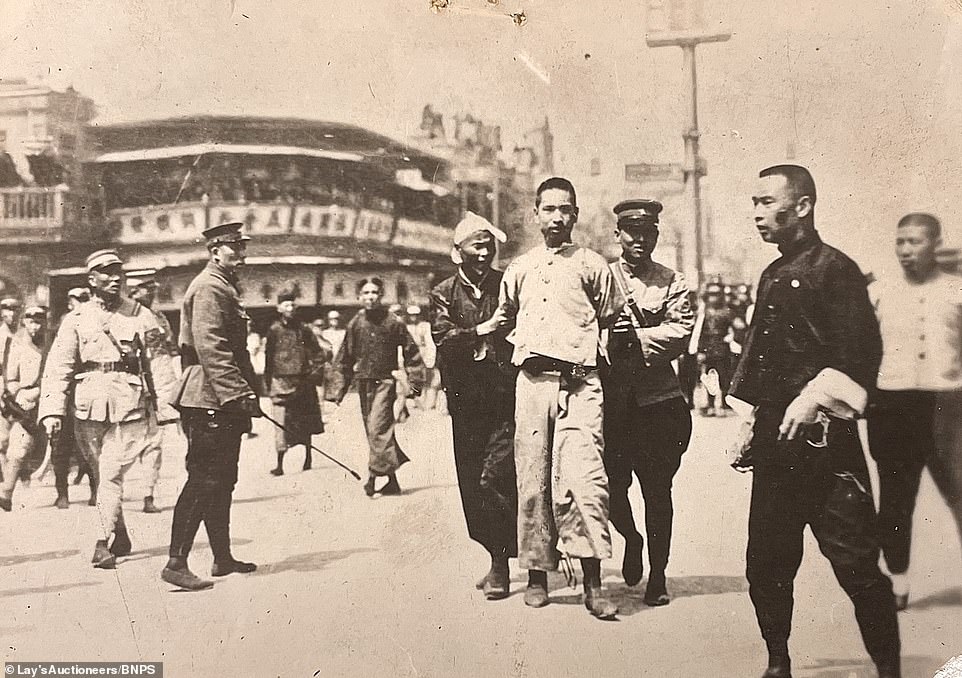 After 85 years, photographs depicting the terrible reality of life in 1930s China have surfaced.

The collection of 210 black and white pictures was acquired by Royal Navy seaman Frederick Warrener while he served on HMS Falmouth when it was stationed in China between 1935 and 1937.

He toured around the country, documenting daily life among his friends, village settings, and harsh executions.

In a particularly distressing photograph, the severed head of a guy lies on the ground next to his lifeless body.

Elsewhere, Warrener photographed stacks of bodies that may have been early casualties of the 1937 Sino-Japanese War.

Since 1927, the Kuomintang-led government of the Republic of China and the Chinese Communist Party had been engaged in the first phase of the Chinese Civil War.

Other harrowing images depict a corpse floating face down in a river and men kneeling as they look to await beheading.

The crew of HMS Falmouth can be seen in happier photographs standing in their uniforms, dining together, and playing tennis.

There are also images of Chinese inhabitants, including youngsters on the street and a family beaming from a punt boat.

Warrener compiled the album, which remained in his family for 85 years.

His grandson sold it for £200 to Lay’s Auctioneers in Penzance, Cornwall.

This album was compiled by the vendor’s grandpa, Frederick Warrener, about whom we know very little, according to Mimi Connell-Lay of Lay’s.

‘Tourists and Navy guys frequently kept horrific souvenirs of the execution photographs. There must have been a ghoulish fascination with them.

‘At the time, the Chinese legal system demanded harsh punishment for significant crimes, offenses against Confucianism, and crimes against the state.

Beheading was a customary penalty for pirates, thieves, and other perpetrators of serious offenses.

The majority of these personnel would not have had their own personal cameras, thus the photographs in Frederick’s portfolio are extremely rare.

It could have been easily lost forever, thus it is fortunate that we have a complete album of the past.

Since the founding of the China Station in 1865, Britain had a presence in China.

The station was charged for protecting the military and commercial interests of the United Kingdom along the shores of China, its navigable rivers, and the western Pacific Ocean.

It had bases in Singapore, Hong Kong, and Liugong Island.

The HMS Falmouth served as the commanding Admiral’s despatch vessel, letting him to visit ports that were too small for flagship Navy cruisers.

In August 1937, with the commencement of conflict between Chinese and Japanese forces, 2,000 British women and children were evacuated from Shanghai aboard the ship.

The Sino-Japanese war ended when Japan was defeated in the Second World War in 1945, following the dropping of atomic bombs on Hiroshima and Nagasaki by the United States.

The second phase of the Chinese Civil War began around the same time and concluded with the Communist forces of Mao Zedong prevailing.