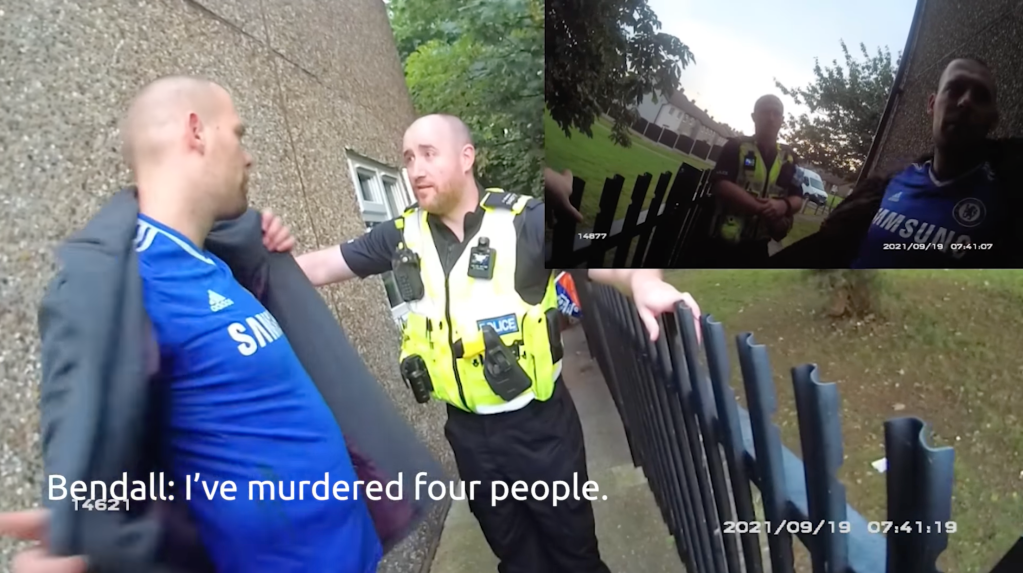 On Wednesday, a British man was sentenced to life in jail for four murders; police bodycam evidence showed him nonchalantly admitting to the killings.

Damien Bendall made the confession shortly after killing his partner Terri Harris, 35, her two children John-Paul Bennett, 13, and Lacey Bennett, 11, and her close friend Connie Gent, 11 years old, inside a home in the English town of Killamarsh last year, according to video released by the Derbyshire Constabulary on Wednesday.

“I know what will transpire. Obviously, I’m going back to prison,” Bendall informed one of the officers outside the residence where the crimes were committed.

When asked why, he responded calmly, “I’ve murdered four people.”

According to the Derbyshire Constabulary, Bendall pled guilty to the four killings and to the rape of Gent. For his atrocious deeds, he was sentenced to five life terms in prison.

The confession of Bendall to the murders was captured by police body cameras.
The Derbyshire Police Force

Before the dramatic caught-on-camera confession to police, Bendall acknowledged to the crime over the phone to a dispatcher, according to a recording of the call that was released.

“I need the police and an ambulance because I’ve just murdered four people,” he said.

Bendall, 32, was in a relationship with Harris, and the two were cohabiting with her two children, according to the police. Gent, the eleven-year-old acquaintance, was sleeping over when the Bendalls were attacked.

According to the BBC and other sources, Harris was pregnant at the time of the murders.

Lord Justice Nigel Sweeny criticized Bendall as he sentenced him to five life sentences for the murders he committed with a claw hammer in September 2021.

“You started dating Terri Harris in April of 2020. Throughout that time, you were abusive and dominating. You abused multiple substances and were violent and unstable. “On the evening of Saturday, September 18th, while you were with Terri and the three children, you were under the influence of cocaine and cannabis,” Sweeny reportedly told police.

“You attacked a (helpless) woman and three children with a claw hammer many times on the head and upper body as you moved around the house abusing them,” the prosecutor said.

The investigation’s lead investigator, Detective Inspector Mark Shaw, stated in a statement that the level of force and violence employed by Bendall demonstrates he wanted them all dead.

“Because of the nature of their relationship, they had all come to trust Bendall, and he seized the opportunity to breach that confidence and commit the horrifying atrocities,” Shaw said. The power and weapon he employed would have rendered them disabled very quickly.