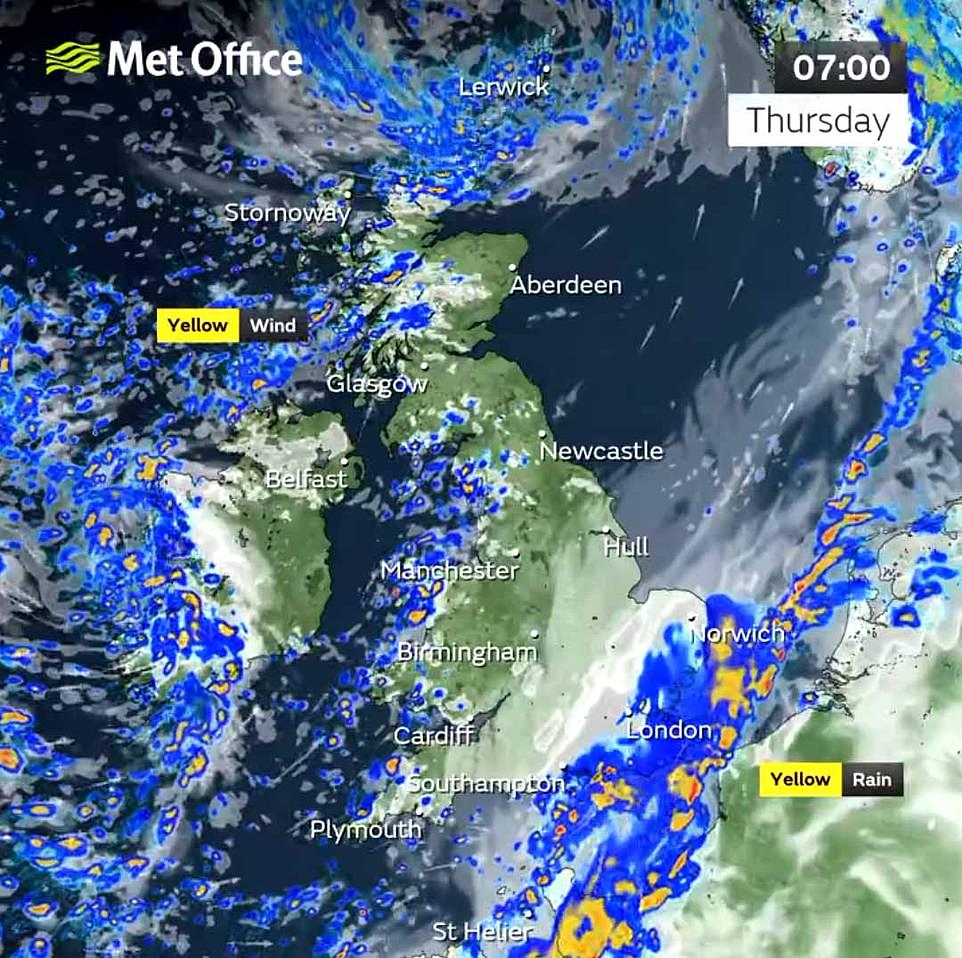 This morning, wet and windy conditions have caused mayhem for commuters across the United Kingdom, as flash flooding caused by heavy overnight rains has closed roads and canceled public transportation.

The worst-affected regions are in the South East of England, where flooding has shut portions of the M25, A41, and A1 in London and the majority of Underground lines are experiencing delays or partial suspensions.

This morning, drivers in the capital were photographed abandoning their vehicles on flooded highways after attempting to drive through.

Until mid-afternoon today, a yellow weather warning for rain has been issued for an area spanning from Portsmouth to Canterbury.

There are 17 flood alerts in England, 15 in Scotland, and 13 in Wales, for a total of 45. Coastal areas might receive up to 40 millimeters of precipitation.

All of the Bakerloo, District, Metropolitan, and Overground lines are partially suspended, while the Circle, Elizabeth Line, Hammersmith and City, and Piccadilly lines are experiencing significant delays.

In the meantime, a yellow wind warning is in effect for the northern and northwestern regions of Scotland.

Overnight, it rained heavily in portions of the South East of England, and the downpour continued this morning.

According to the forecaster, coastal areas could receive up to 40 millimeters of precipitation, and there are already 12 flood alerts nationwide.

A construction worker stands in floodwater on the A41 Hendon Way in North London, which is now fully closed due to heavy rainfall.

In Greenwich, South East London, vehicles drive through a portion of flooded road amid heavy rainfall.

On their way to work, individuals navigate through the rain. A yellow rainfall warning is in effect for regions of South East England.

A cyclist navigates around a puddle as London’s roadways flood following a night of heavy rain.

According to the Met Office, Northern Ireland and western Scotland are enjoying a very wet and windy day, with heavy rain and gusts of up to 60 mph along the coast.

Throughout the day, it is anticipated that the strong winds and heavy rain will travel eastward.

Meteorologist-in-chief Neil Armstrong predicts that 30 to 40 millimeters of precipitation will fall in certain locations, and when it falls on land that is already saturated from recent precipitation and fallen leaves, there may be spray and flooding on the roadways, as well as travel delays.

“On Wednesday, a large portion of the United Kingdom can anticipate a period of strong southerly winds, although the warning region indicates where gusts of up to 65 miles per hour are expected to cause travel delays.”

In the south west of England, Flood Alerts have been issued for the River Tone, West Dorset Rivers and Streams, and South East Somerset Rivers.

In addition, alerts have been issued for the River Uck in East Sussex, the River Stour and Smestow Brook in the Black Country and South Staffordshire, the River Trent in Derbyshire, and the North Sea Coast at Bridlington.

In the Lake District, the Rivers Brathay, Rothay, and Winster, Upper River Derwent, Stonethwaite Beck, and Derwent Water are also on notice.

In Wales, a flood alert has been issued for the confluence of the Severn and Vyrnwy rivers, with flooding expected to damage low-lying land along the river from the Welsh border at Llawnt to Shrawardine near Shrewsbury.

This morning’s strong downpours in London have caused flash flooding in a number of districts.

Yesterday afternoon, footage emerged of a jet attempting to land at Bristol Airport due to the violent winds created by Storm Claudio.

During heavy rain in Greenwich, south-east London, automobiles travel through a big puddle.

The Met Office has issued a warning that heavy rain may cause road flooding and possibly public transportation disruptions.

A laborer stands next to a vehicle trapped in floodwater on the A41 Hendon Way in North London.

Forecasters have told Brits to “get their ice scrapers out” and prepare for frost to blanket the country this week.

In many rural regions of the north, temperatures are expected to fall below freezing overnight, before falling to -2C tomorrow.

Jim Dale, a senior meteorologist with British Weather Services, told Express.co.uk that these conditions will last far beyond mid-November. He stated, “It’s going to be a considerably cooler week, with some light Scottish glen frosts between Wednesday and Saturday and particularly frosty mornings in the north.” We are seeing the most turbulent weather since early spring.