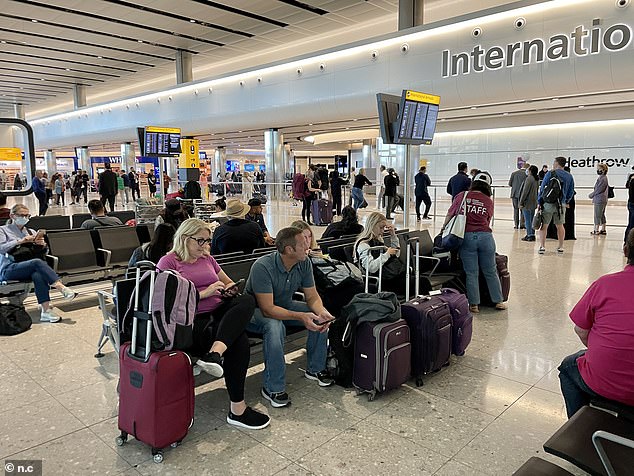 After a Heathrow passenger spent three hours sifting through luggage at the airport in an unsuccessful attempt to retrieve her missing suitcase, British Airways prices are skyrocketing and the airline is canceling hundreds of summer flights.

BA warned that the number could increase to 18,750 cancellations by the end of this week. Up to the end of June, BA cancelled 17,600 flights, or 2.8 million seats.

This month alone, nearly 1,000 additional flights have already been canceled, including 785 from Heathrow and 186 from Gatwick.

The airline has stated that it is going through the “most difficult time in its history” and that it “regrettably” had to further cut back on its timetable.

Although BA initially stated that it would be cutting back its schedule by 10%, it has already increased to 11% for the summer.

According to The Independent, BA presently has the bulk of licences to fly from and land at Heathrow. Friday is the deadline for airlines to cancel summer flights without forfeiting unused “slots.”

However, other airlines are unlikely to step up and grab the slots because doing so would require them to start up new flights and incur additional marketing costs.

As a result, it is anticipated that prices would keep increasing even as supply decreases.

72 flights from Heathrow to Nice have been canceled altogether through July 15, which will cause prices to increase to an average of £1,180 tomorrow.

In the next 10 days, a further 58 flights to Dublin, 54 to Amsterdam, and 52 to Edinburgh have been canceled.

A BA representative said: “We reduced our summer schedule early this year as a preventative measure to give passengers as much warning as possible about any modifications to their travel arrangements.

“Unfortunately, it has become necessary to make some additional reductions as the entire aviation industry continues to navigate through the toughest time in its history. Customers are being contacted by us with an apology and an opportunity to rebook or issue a full refund.

The statement continued, “We appreciate these new measures, which assist us to deliver the stability our customers deserve by making it easier to consolidate some of our quieter daily flights to multi-frequency destinations well in advance, and to protect more of our holiday flights.”

It happens after a traveler who was left without any clothes for her vacation spent three hours sifting through mounds of bags at Heathrow Airport.

When Lori Harito, 35, took a flight from Toronto to Montreal on June 20, Air Canada workers informed her that her suitcase had been missing.

But after a week of waiting, she made the decision to act on her own and went to the airport, where she spent three hours unsuccessfully rummaging among mounds of baggage.

She has recently stated that she might not be reunited with her possessions for “months” and that “it seems there is nothing I can do about it.”

Ms. Harito had walked as usual from her flight to the baggage reclaim area, but when she went to a lost baggage desk when it did not show up on the conveyor belt, she was informed that her suitcase was “somewhere in the airport.”

When she caught her connecting flight in Montreal, it had actually been put on the wrong airplane to Heathrow.

While frantically hoping to get a call from luggage services with an update on its location, she was forced to go to London with nothing but the clothes on her back.

“I had to make a claim with lost baggage who told me that my suitcase was someplace at the airport, but they didn’t know where,” the fitness and health blogger added.

When I arrived, I was informed that my bag was misplaced; thus, a week later, I returned to the airport to look for it myself.

She remembered the massive stacks of abandoned bags at the lost luggage area at the airport.

She claims that she paid $75 to check her suitcase in, despite the fact that Air Canada has sent her a $60 eCoupon for her lost luggage.

While she waits to be reunited with her own garments, Ms. Harito has been forced to spend a fortune on clothing.

The customer service representatives at the luggage terminal informed her that they had thousands of suitcases to process and deliver, she continued.

I still don’t have my bag, and there’s no longer any way to contact Air Canada customer support.

I was informed that the layover was the cause of the problem and that my luggage was really placed on the wrong flight when I arrived to check for my bag.

Most flights out of Montreal were either canceled or delayed, including mine.

The gate for my flight to London changed when we arrived in Montreal from Toronto, but my luggage still boarded the flight that was at my previous gate.

It comes after travelers this week were compelled to sleep beside the trash cans in Heathrow as the pandemonium at the airport continued to deteriorate.

While terminals around the nation are once again crowded with irate, queuing passengers, a young family was seen catching up on sleep in the most awkward of situations.

Given that jet fuelers have decided to strike, the plight of travellers at Heathrow also seems destined to get worse.

About 50 Heathrow employees who fuel aircraft have been authorized to strike for 72 hours beginning at 5 a.m. on July 21.

It was planned to hit on the opening weekend of the school holidays, when millions of families are making travel plans, in order to do the most harm possible.

Aviation Fuel Services, one of four companies at Heathrow that refuel around 150 aircraft each day, employs the workforce.

After wages decreased by 15% over three years, according to Unite, employees need a double-digit pay increase to end the strikes.

Kevin Hall, a regional officer for Unite, stated: “If AFS returns to the negotiation table and offers an offer that matches our member expectations, disruption may be avoided.”

Covid is also posing a threat to millions of Brits’ summer travel plans, as experts worry that other countries may reinstitute strict restrictions to combat the spread of diseases.

If the number of self-isolating workers soars, tests, facemasks, and immunization passes may return to popular vacation areas, and airports may experience additional confusion.

The future of the summer vacation plans for millions of Britons may now be in jeopardy, say MPs and experts in public forums.