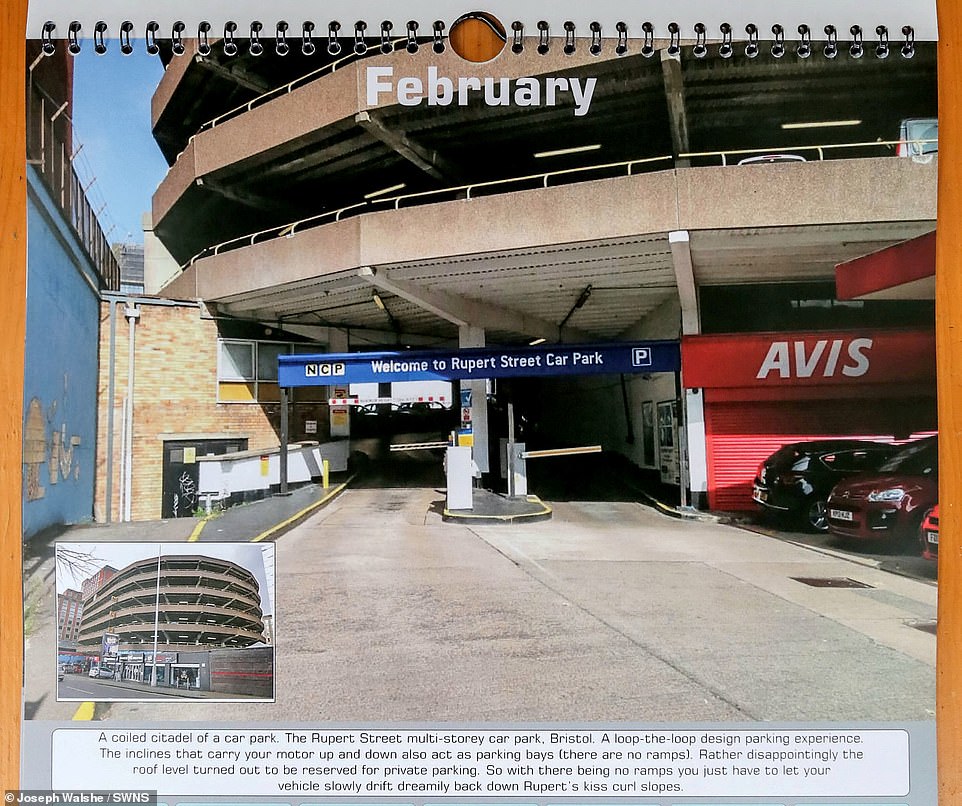 The “dullest man in Britain” has created an odd calendar for 2023 that honors the nation’s top parking lots.

Kevin Beresford traveled the length of the nation for many months, stopping along the way to examine the parking options from Land’s End to John o’ Groats.

The 70-year-old then combined his 12 favorites into a calendar that is purely dedicated to the greatest parking spots in Britain and is a candidate for the most boring calendar of 2023.

Mr. Beresford of Redditch, Worcestershire, who acknowledges that he may be “Britain’s dullest man,” chose to travel the 603 miles in pursuit of the best parking place in the country.

And he thinks Birmingham is where the greatest one is located.

The Trinity Graffiti parking lot in Digbeth, the city’s creative district, has a cocktail bar along one of its sides, walls made of crushed vehicles, and street art all over it.

The beautiful art deco Brewer Street car park in London’s Soho, which costs £47.80 to park for four hours, is also one of his top selections.

Also included is Culloden in the Highlands, home to Britain’s most eerie parking lot, where hundreds of people died in the last significant combat fought on British soil in 1746.

Pictured in February is Bristol’s unusual Rupert Street parking lot, where drivers are compelled to park on a sharp slope.

Other locations highlighted include Milton Keynes, which has the nation’s cheapest car park and Edinburgh Airport, which has “helter skelter” ramps.

The Highlands’ Duncansby Head, the northeasternmost point on the British mainland, is said to provide the finest viewing parking.

Mr. Beresford evaluates parking lots based on a variety of criteria, including illumination, cost, and space aesthetics.

The Car Park Association Society’s president, Mr. Beresford, stated: “I believe first and foremost that if I were to construct a car park myself, it would have to be properly illuminated.

“That is a crucial point that is often ignored. Particularly at night, a dark parking lot is unsettling.

Additionally, many of the parking spaces were made for little automobiles in the past.

Since large 4x4s are now common, many of the formerly appropriate little parking places are no longer suitable.

However, I am also attracted to beautiful parking parks, which is why I chose the Trinity Street one in Birmingham.

What other parking lot has an impressive entrance composed of smashed automobile engines?

As you enter, you’ll see street art all over the place, including a huge Spider-Man.

And there is a cocktail bar on your right as you enter to park your vehicle. This parking lot has everything, even wigwams to sit beneath if it rains.

“This parking is near to the city center and is also extremely affordable.” It stands out as being rather unusual and distinctive.

After selling off earlier boring calendars with roundabouts, benches, and postboxes, Mr. Beresford came up with his most recent concept.

He claims that in order to separate out from the competition, he takes great delight in portraying aspects of British culture that more traditional calendars never do.

I concentrate on aspects of English life that no one else does, he said.

I manufacture the calendars that nobody else is selling; I don’t make the typical conventional calendars.

I believe that my calendars are popular in part because they are distinctive.

I’ve been referred to be the dullest man in Britain, yet I take pride in this label. To be boring is attractive.