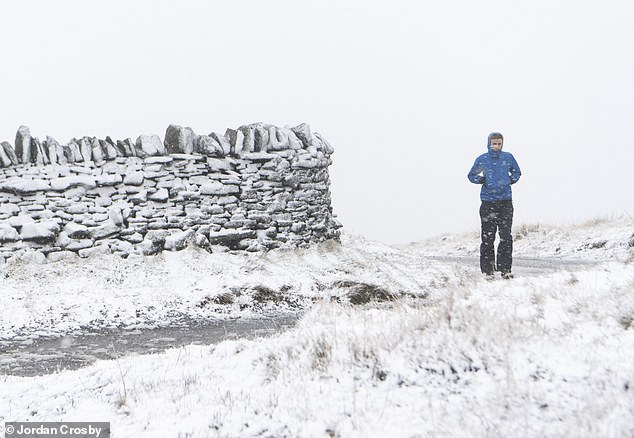 The Met Office has issued an amber cold weather signal as the United Kingdom prepares for the coldest night of this winter.

This week, the North East of England is expected to experience temperatures as low as -6C as a blast of Arctic air delivers severe frosts and a flurry of snow showers.

The warning is activated when the country experiences extremely cold weather that might enhance the health risks for vulnerable people and impede service delivery. Under level 3, social and healthcare services are expected to safeguard groups at high risk.

The North East will have snowfall beginning on Wednesday, with temperatures falling as low as -6C on Thursday.

The current English record is -5.4C, set on November 30 at Redesdale Camp, Northumberland.

On December 2 at Libanus, Powys, Wales, the lowest temperature of the season was -2.8 degrees Celsius.

Yesterday, a hiker braved a snow shower in Nenthead, Cumbria, as the United Kingdom prepared for an Arctic period and plummeting temperatures this week.

The Met Office has issued a level 3, or amber, cold weather advisory for England between Wednesday, December 11 at 6 p.m. and Monday, December 12 at 9 a.m. The notice indicates that cold weather might increase health risks for vulnerable individuals, and it urges social and healthcare agencies to take measures to safeguard at-risk populations.

What is a cold weather alert level 3?

The Met Office has issued a level 3, or amber, cold weather advisory for England between Wednesday, December 11 at 6 p.m. and Monday, December 12 at 9 a.m.

The notice signifies that the cold weather might raise the health risks for vulnerable individuals, necessitating action by social and healthcare agencies to safeguard high-risk populations.

The Met Office predicts that air from the Arctic will sweep southward over the nation beginning late on Wednesday, bringing extremely cold nights and frost.

A warning has been issued for the Scottish Highlands on Wednesday for up to two inches of snow at low levels and four inches in locations at least 650 feet above sea level.

A Met Office spokeswoman stated, “Wednesday and Thursday will be cooler, with snow showers in parts of northern Scotland, Northern Ireland, and north-east England.”

High pressure elsewhere means that sunny periods will prevail by midweek, but clear skies will bring severe frosts to the Pennines on Thursday night, with temperatures falling as low as -6C.

In rural regions of southern England and Wales, temperatures of -4C or -5C are conceivable.

Alex Burkill, a Met Office meteorologist, stated, “Currently, it is cloudy, so there won’t be a significant difference between daily highs and overnight lows. However, as the week progresses, we will experience a cold northerly flow with clearer skies, so it will be sunny and crisp during the day but even colder at night.”

Temperatures during the day and night will be substantially below normal for this time of year, making it seem even colder than it is.

In areas of England, especially the South West, temperatures might reach – 5 or minus 6 degrees Celsius, which is extremely cold.

Midweek sunshine will be dominated by high pressure, but the clear skies will bring severe frosts, with temperatures in the Pennines falling as low as -6°C on Thursday night.

Yesterday, a vehicle travels in snowy conditions near the Cumbrian town of Nenthead.

Mr. Burkill cautioned that the cold wave “may continue a week” but is not expected to deliver significant snowfall to England and Wales.

He stated, “The northerly flow will remain with us; it won’t be extremely turbulent, so there will be a few showers, but it will be primarily dry and chilly.”

From the middle of next week on, there are indications of more unstable weather with warmer weather approaching from the south, although this is still a ways off.