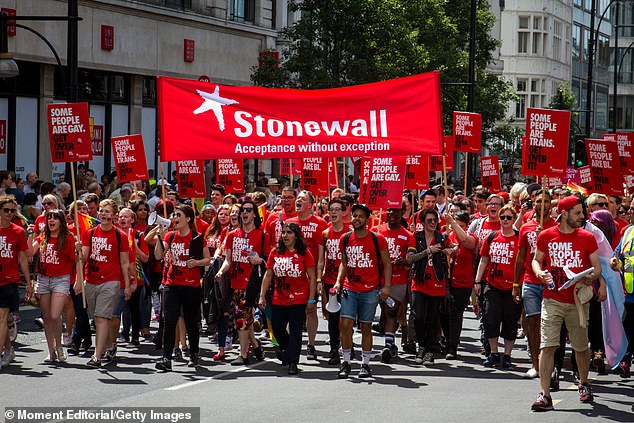 A ‘transphobia’ row has erupted after an expose of Stonewall by BBC presenter Stephen Nolan was nominated for a string of awards.

The programme was widely praised and may have played a role in the government’s decision to distance itself from the charity last year over its allegedly ‘extremist stance’ on trans issues and hostility to gender-critical opinions.

But a group of radio producers slammed the decision to nominate the programme due to its ‘harmful nature’, while a production company threatened to boycott awards organiser the Radio Academy if it ‘continues to promote transphobic work’.

Nolan Investigates did not go on to win any awards at last night’s ceremony – which is seen as radio’s equivalent of the Oscars.

An open letter claimed Nolan Investigates contributed to ‘a harmful moral panic surrounding trans people’ and ‘perpetuates a narrative that creating a safe world for trans people is a divisive issue.

The letter claimed that nominating the podcast for awards ‘runs contrary to the values of the Radio Academy as a charitable organisation with responsibilities to all people who are protected under the Equality Act 2010’.

It was signed by more than 150 radio industry workers, several former BBC freelancers and the production company Long Cat Media.

The Radio Academy refused to cave in to the boycott threats – which have sparked a free speech row.

Toby Young, General Secretary of the Free Speech Union, said: ‘Stephen Nolan’s documentary was a forensic examination of the ideological capture of various public institutions by Britain’s most powerful political lobby group and the chilling effect that has had on free speech.

‘It did what BBC radio journalism should do but so rarely manage – it spoke truth to power.’

The Radio Academy told the Telegraph: ‘At this year’s Arias, Stephen Nolan’s work has been nominated in four categories. Those four judging panels comprised 38 judges, which we can confirm included LGBTQ+ people. All panels reached their conclusions independently, based on the strength of the entry submitted.

‘We’ve recently had conversations with a group of audio professionals concerned about the nominations, and we hear the issues they’ve raised. We thank the group for engaging with us in the way they have and look forward to further conversations with them to ensure the Radio Academy remains an inclusive place for everyone in the industry.’

A BBC spokesman said: ‘Nolan Investigates: Stonewall was an important piece of investigative journalism. It looked at the role and influence of Stonewall on the work of many public bodies across the UK, and it facilitated an inclusive debate about the issues raised – all of which are matters of legitimate public interest.

‘The series’ Arias nominations are welcome recognition of its quality and worth.’

5 Live presenter Nolan examined how public-funded bodies including the BBC, Ofcom and the Scottish and Welsh governments have been influenced by Stonewall due to their involvement in the group’s diversity schemes.

The programme revealed that Nicola Sturgeon’s government agreed to delete the word ‘mother’ from its maternity leave policy after pressure from Stonewall. Stonewall requests ministers to remove ‘gendered’ words from official policies as part of its advice on becoming more LGBT friendly.

It also found that broadcast regulator Ofcom submitted evidence about its diversity practices to the Workplace Equality Index in a bid to get the best possible ranking.

Among this evidence was rulings it had made against broadcasters in response to allegedly transphobic comments – prompting some commentators to suggest its rulings were being influenced by the charity’s agenda. This was strongly denied by Ofcom, which insisted its involvement with the index had ‘no bearing whatsoever’ on its decisions as a regulator.

The programme also found that Stonewall ‘dictated policy’ to the Welsh government – convincing officials to adopt its interpretation of the Equality Act to include ‘gender identity’ as a protected characteristic.

A Stonewall spokesperson said at the time: ‘Our work with employers focuses on helping to build an LGBTQ+ inclusive workplace for their employees, and in no way affects their impartiality. Supporting LGBTQ+ people in the workplace should not be seen as a political or controversial act.’

The Diversity Champions programme, which was set up in 2001, sees the charity bill employees for advice on how to promote gender inclusion. The Workplace Equality Index is a public ranking of organisations that does not require a fee to enter.

Diversity Champions has been criticised for ‘extremist’ advice which included ditching the word ‘mother’ because it is ‘gendered language’.

A raft of organisations including Ofcom, Channel 4, the BBC, the Cabinet Office and the Equality and Human Rights Commission have already left the initiative following criticism of its hard-line policies and widespread outrage after its boss said believing a person’s sex cannot be changed is as bad as anti-Semitism.

A Freedom of Information Request has revealed the Scottish Government has paid Stonewall £415,000 in grants between April 2017 and last month, in addition to thousands of pounds worth of membership fees.