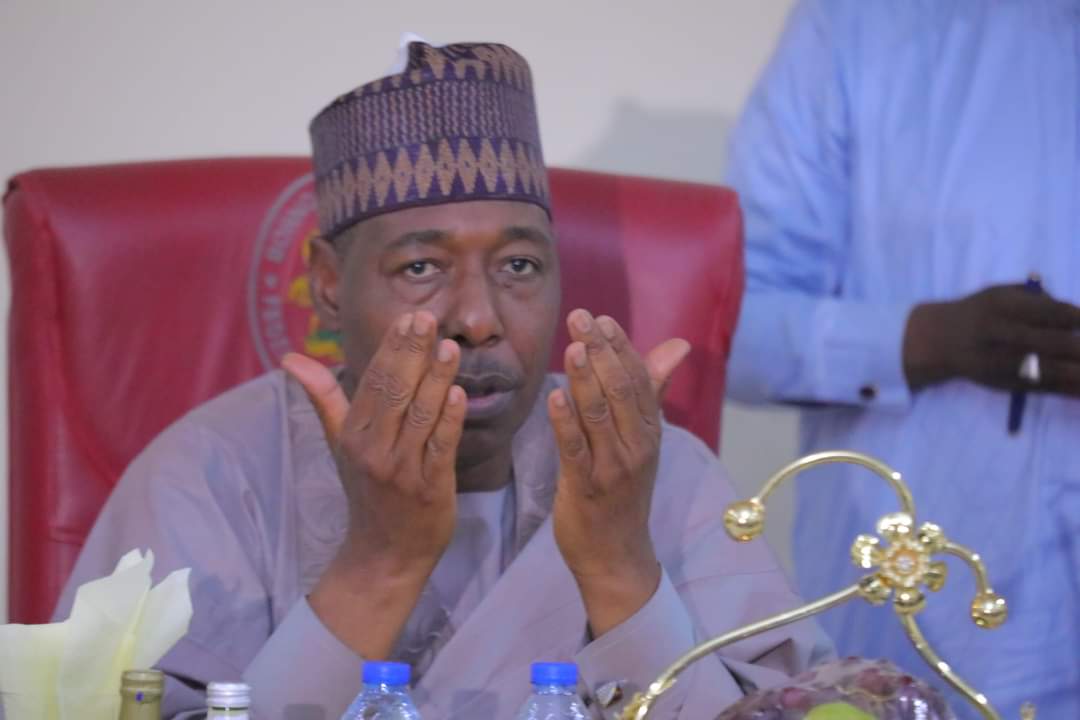 The Borno State Governor, Professor Babagana Zulum had host all service commanders who are members of the state security council, at the government house.

Other dignitaries and top decision-making  people in the state were in attendance.

Governor Zulum said, in the area of security they were able to achieve a solid level of success.
He said, “The director of DSS is here and  i don’t think we have communicated on emerging security issues in the last 2 or 3 months.

“Our first and second year in office we communicate up to 20 times some times in the night on Boko haram crossing Minok, Baga, and other places,  that has been the climax of our discussion, but we thank God we no longer have such discussions”.
Zulum also said, ” it has never been easy working with me, we fought many atimes but i meant well, especially with the security agencies but now we all can all see light at the tunel. All this couldn’t be achieved without the commitment and  professionalism of our military personnel and the para- military we remain enternally greatful.
” As the 2023 general elections draws closer lets not divert our attention in a view not to address insecurity despite the successes recorded, destitution, and deforestation    among other’s. On assumption of duty as the Goveror of Borno, we promised to lay a solid foundation for the development of our dear state.
“on the issue of job creation within the last 3 years we injected nothing fewer than N10 billion naira into the economy with the view to support the less privileged to own thier means of livelihood”.

The governor further stated that, “on Education we build new schools, and a number of over 5000 classroom were destroyed and we build nothing less than 2500 classroom in the last 3 years. And we promised not only to provide western education but to ensure that a combination of western and islamic education in the state.
“On health, we did well especially in the area of recruitment of health workers we bridge the gap in terms of salaries between the state and federal medical doctors. No differential with a view to enhance the retention of our medical doctors.”
Governor Zulum said one of the most important achievement recorded in the last 3 years was the rehabilitation and resettlement.

“We promised the people of Borno state on assumption of duty that we shall return the following communities, Mallam-fatori, kirawa, Goshe, Kawuri, Gorosoyi, Ajiri, Marte among others.
“And some of the areas that are not occupied by human population in Borno are Mallam fotori, headquarters of Abadam local government and Gudumbali, headquarters of Guzamala local government. A committee will soon be inaugurated to ensure the re-establishment of these communities, we have so far returned people to Goshe, Kukawa, Baga, Koros, Doro and Warabe,” the Governor explained.
Similarly Honourable Kaka Shehu Lawan who is the Attorney General and commissioner for Justice spoke on behalf of the state executive council members and thank the governor for honouring them and finding them worthy of making them part of his cabinet.
Naval Commandor BTF Yiedin the Maritime component commander- Operation Hadin Kai spoke on behalf of the security members and thank the state governor for the mutual co-operation they shared, also  Alhaji Gambo Gubio who spoke  for Borno Elders Forum  appreciated the Governor’s efforts at  rebuilding Borno as well as restoration of peace and security.