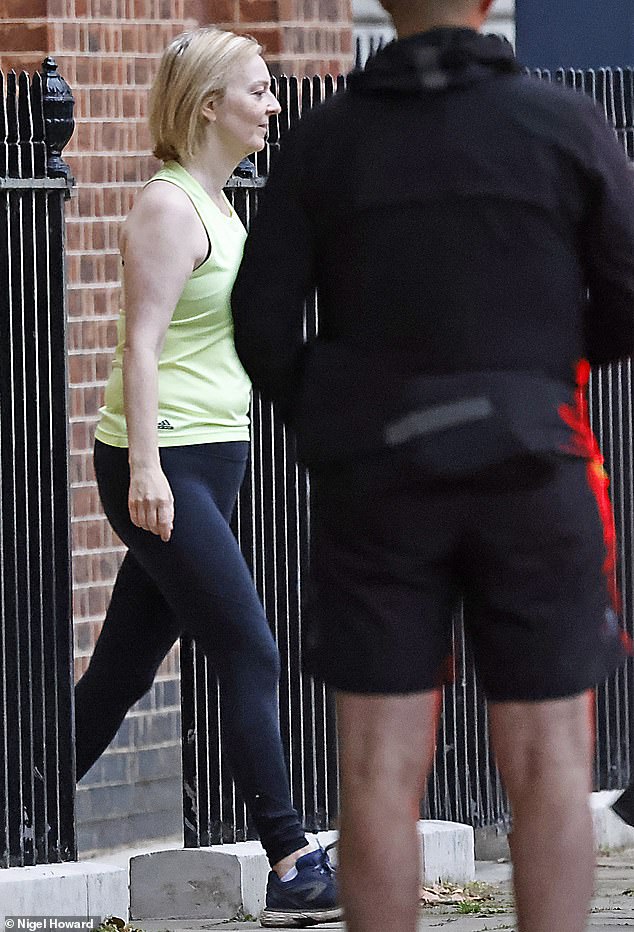 As Liz Truss left for an early workout, Boris Johnson put on his athletic attire and went for a jog in the park.

On a frigid morning in London with temperatures only reaching roughly 12C, the new prime minister was photographed leaving Downing Street in her workout attire.

The former PM, who was dressed in shorts, a casual sweater, and sneakers, ran across the capital while waving to the photographers.

Mr. Johnson is renowned for going for morning jogs on a daily basis and is often seen walking his dog Dilyn around St. James Park and downtown London.

The new PM is also known to go for early morning runs and to visit the Archbishop of Canterbury’s Thamesside garden at Lambeth Palace with specially chosen advisors.

The goal is to assist her in coming up with solutions for the frightening array of problems taking up her in-tray. Before holding her first meeting at 8.30am at her desk in the Cabinet Office, she goes back to No. 10 to take a shower.

A few days before she was named the victor of the Tory leadership election on September 6, Ms. Truss was initially offered the use of Archbishop Justin Welby’s London apartment.

One of the oldest continually maintained gardens in the nation, Lambeth Palace was established in 1197 and features one of the biggest private gardens in London, measuring 10 acres.

When Ms. Truss, her husband Hugh, and their two children moved into Downing Street, she informed authorities that she wanted “frequent exercise sessions” to be included in her calendar and, where feasible, combined with meetings.

She solicits advice from those in her inner circle as she jogs around the grounds regarding solutions to the cost-of-living crisis, high energy costs, the issue of slow economic growth, the backlog in the NHS, and difficult questions like the extent to which the government should get involved in the “culture wars” over woke issues.

When he served as prime minister, Mr. Johnson often ran in the grounds of Lambeth Palace with Dilyn.

Video from the previous year shows Mr. Johnson making an iconic sprint to his hotel after getting out of a vehicle in front of a crowd of photographers.

The then-prime minister left his hotel in Manchester early dawn to go for a jog in preparation for his keynote address to the October Tory Party conference.

Only three days before, Mr. Johnson was seen jogging while wearing a suit shirt, shorts, and black socks, looking to have forgotten his sports gear.

Aides argued that the black shoes he was sporting were really trainers, although they seemed strangely official.

It comes as Ms. Truss has been questioned about the “declining” value of the pound.

Virgin Atlantic CEO Shai Weiss encouraged the Prime Minister to make a “tough choice” that would increase the value of the currency.

According to economists, the pound may finally fall to parity with the US currency this year. On Tuesday, it was hovering around 1.08 US dollars.

“The weakening of the pound is harming, not Virgin Atlantic, it’s hurting the economy and it’s affecting consumers,” he said at a news conference in the heart of London. “It’s really completing or fueling the inflation vicious cycle that we’re in.”

‘In money, we purchase gasoline and aircraft. Thankfully, we made some extremely wise financial decisions that will lessen the impact of the weaker pound over the next year.

The message to the government is, in my opinion, rather obvious. Upon taking office, Prime Minister Liz Truss had to make some tough choices.

‘Perhaps you need to make a tougher choice to stop the pound from falling and prevent our nation from developing an unsustainable perception of weakness in foreign markets, which would obviously have an effect on interest rates, consumers, mortgage rates, and the whole economy.

Consequently, we are worried. Although the basics are sound, we, like everyone else in this nation, are worried about the atmosphere in which we operate.

In addition, Ms. Truss is dealing with the first Cabinet rebellion of her inexperienced administration over proposals to relax immigration laws to support economic growth.

Senior officials, such as Home Secretary Suella Braverman and Business Secretary Jacob Rees-Mogg, are said to be dissatisfied with a potential relaxation of regulations regulating the shortage jobs list.

Because there are so few qualified candidates for these positions, the 30,000–40,000 person arrival ceiling may need to be lifted.

The need to speak English with a specific level of ability may also be loosened, according to the Telegraph.

The Home Secretary does not think that lowering net migration has to include slowing growth, a source told the Daily Telegraph. Both goals are achievable. You may reduce aggregate migration while also solving the economic obstacles that need greater skill levels.

According to a Downing Street insider, the proposal would include “raising numbers in certain places and lowering in others,” but they did not elaborate.

“We also want to see those who are economically inactive go back into work,” they said. “The Prime Minister has made that plain.”