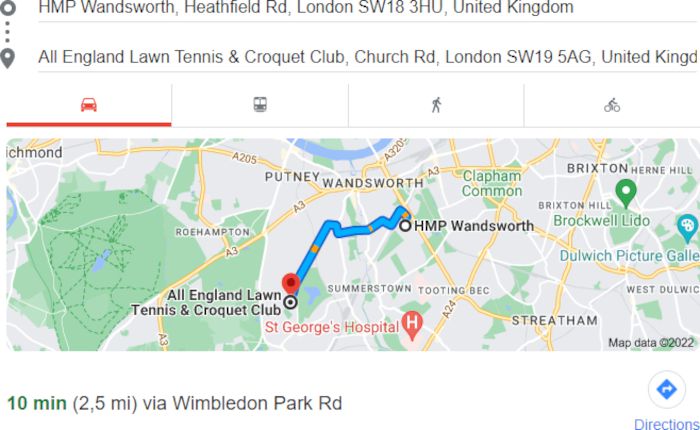 Of all the jails in the land, Boris Becker will be spending the next 15 months (or so) behind bars just a booming serve-and-volley away from Wimbledon centre court.

Becker made that court his own in 1980s, winning three titles.

As reported by The South African website, Becker was jailed for two-and-a-half years last week for hiding £2.5 million after being declared bankrupt.

The now 54-year-old is expected to only serve just over half that time in HMP Wandsworth in South West London.

A quick Google search shows that the prison and Wimbledon are just 2.5 miles (4km) apart – if you take a stroll via Wimbledon Park road.

Becker will literally be able to hear the cheers when this year’s tournament starts on Monday, 27 June.

Meanwhile, as reported by The South African website, Becker has moaned about the food in his prison after being served corned beef as one of his first meals behind bars.

According to The Sun website, the fallen idol, known for his love of fine wines and posh restaurants, has also complained about the small portions handed out.

The German is reportedly using his £10 (R200) weekly allowance to top up his meals by buying chocolate, biscuits and bananas from the prison canteen.

Becker is being held in a cell of six square metres and is locked away from 20:00 each night until 07:00 the next morning.

In some good news for the six-time Grand Slam winner, he has been told he will keep his own cell, unlike most other inmates who share, and is likely to be transferred to a ‘softer’ jail within weeks.

Becker is also reportedly struggling to sleep due to “constant noise” at night and the stench of Wandsworth Prison in South West London.

He had his first visitor last Friday when girlfriend Lilian de Carvalho Monteiro brought him items including work boots and clothes in a Puma bag.

Boris Becker likely to serve only 15 months in jail

Becker, who is likely to only serve 15 months of his sentence, showed no remorse when jailed at Southwark crown court.

He could be deported when he is released.

He won 49 career titles, raking in around $25 million in prize money.