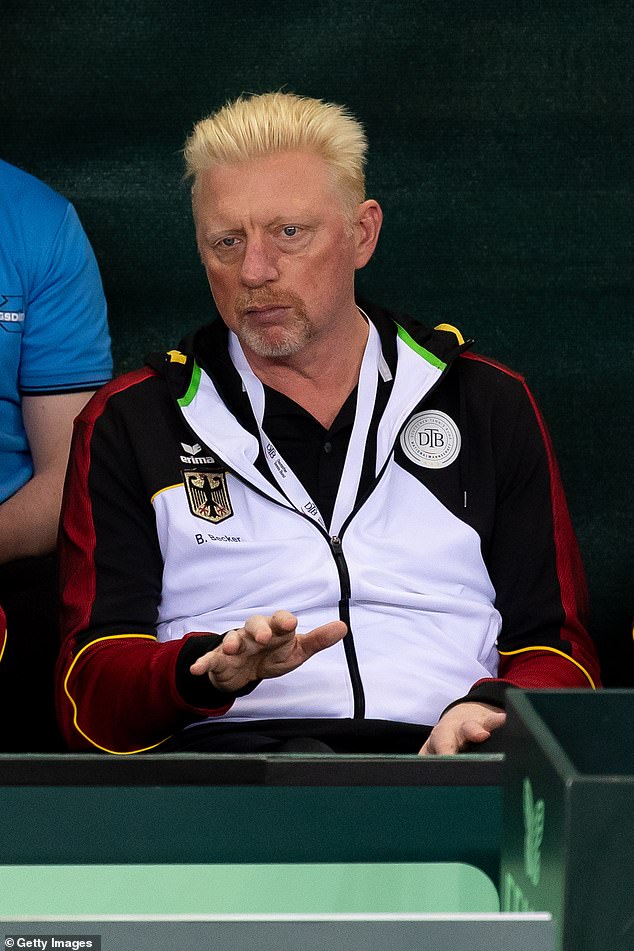 Incarcerated tennis star Boris Becker could face being deported from the UK after serving his prison sentence because he does not hold British citizenship.

But foreign nationals serving prison sentences longer than 12 months are often deported ‘at the earliest opportunity’ as it is deemed ‘conducive to the public good’, according to the Home Office.

Becker, 54, has lived in West London since 2012 but never got around to applying for citizenship, despite stating his intention to do so seven years ago.

He arrived at Wandsworth prison on Friday evening, hours after being slapped with a 30-month sentence at Southwark Crown Court.

He is expected to serve at least half of his sentence.

New inmates taken into Wandsworth prison are forced to remain in the lockup’s ‘induction wing’ for seven to ten days upon arrival due to ongoing Covid restrictions.

Becker may then be transferred to general population, but new inmates would typically need to be in the prison for at least six weeks, showing good behaviour, before being considered for worker roles.

Wandsworth is also a remand prison used to temporarily detain criminals who are later transferred to serve their sentences elsewhere, meaning the likelihood of Becker serving the entirety of his jail-term there is slim.

Due to the non-violent nature of his crime, it is likely Becker will be moved to a ‘softer’ prison with less security restrictions in the coming months.

The ex-pro sportsman was found to have hidden £2.5million worth of assets and loans to avoid paying his debts.

He was declared bankrupt in June 2017, owing creditors almost £50million over an unpaid loan of more than £3million on his estate in Mallorca, Spain.

He transferred around £390,000 from his business account to others, including those of his ex-wife Barbara Becker and estranged wife Sharlely ‘Lilly’ Becker.

The 54-year-old, who got a two-year suspended sentence for tax evasion and attempted tax evasion worth £1.4million in Germany in 2002, was found guilty on April 8 of four Insolvency Act offences between June and October 2017.

Each count carried a maximum sentence of seven years in prison, but Becker received a total of just two-and-a-half years.

Boris Becker’s estranged wife said she is still married to the tennis star and refuses to divorce him – four years after reports the pair had split – despite his incarceration.

Dutch model Lilly Becker, 45, said she ‘completely broke down’ as Boris was sentenced to two-and-a-half years in jail on Friday and ‘couldn’t believe’ what she was hearing, having been ‘convinced’ he would get a lighter sentence.

‘I had to keep it together and I don’t know how I did it,’ she said.

She also told TalkTV’s Piers Morgan Uncensored that she is still married to Boris, despite reports indicating the couple had divorced in May 2018.

‘I’m very much still his wife,’ Lilly said. ‘Estranged wife as that may be but we’re still very much married and have been since we went our separate ways.

‘It was from the beginning intense and a complete, true love story. Everyone who knows us knows this. It’s not that I don’t want to get a divorce. We should handle our business at the right time.’

When asked whether she still loves Boris, she replied: ‘Of course I do.’

She also revealed that Boris is doing ‘okay’ in prison and is ‘as good as he can be’, but adding: ‘It’s not a five star hotel is it?’

Novak Djokovic declared he was ‘heartbroken’ at the jailing of Becker, who was the Serbian tennis star’s former coach.

Becker remained high profile following retirement through his work as a TV pundit and as a successful coach of Djokovic for three years from December 2013.

Speaking ahead of the Madrid Open to reporters in the Spanish capital, Djokovic said: ‘Just heartbroken for him. He’s a friend, a long-time friend, a coach for three, four years, someone I consider close in my life and has contributed a lot to my success in my career.

‘I’m not going to get into details of the verdict, because I’m not in a position to do that, but, as his friend, I’m super sad for him. It’s not much that you can say.

‘I just hope he will go through this period that he has to be in jail and that when he comes out he’s able to live his life – I don’t know if we’ll use the word ”normal” because life is definitely changing for anybody going to prison, especially for that long of a time.’

Andy Murray on the other hand remained more stoic on the matter, suggesting he feels no great sympathy for the three-time Wimbledon champion.

In the eyes of the 34-year-old Scot, Becker has to accept responsibility for his actions.

‘I didn’t really feel particularly emotional about it,’ said Murray when asked about his reaction to the news.

‘He broke the law and if you do that, I don’t think you should get special treatment because of who you are or what you’ve achieved. Again, I feel sorry that he’s in that situation, but I also feel sorry for the people that he’s affected with his decisions as well and what’s happened to them.

‘I hope he’s OK and that he learns from his mistakes. But I didn’t have a particular emotion about it.’