Skip to content
Home » News » News » Border Patrol is on pace to record more than 2 million arrests this year as hundreds of thousands of migrants seeking to enter the U.S. travel from South and Central America up through Mexico 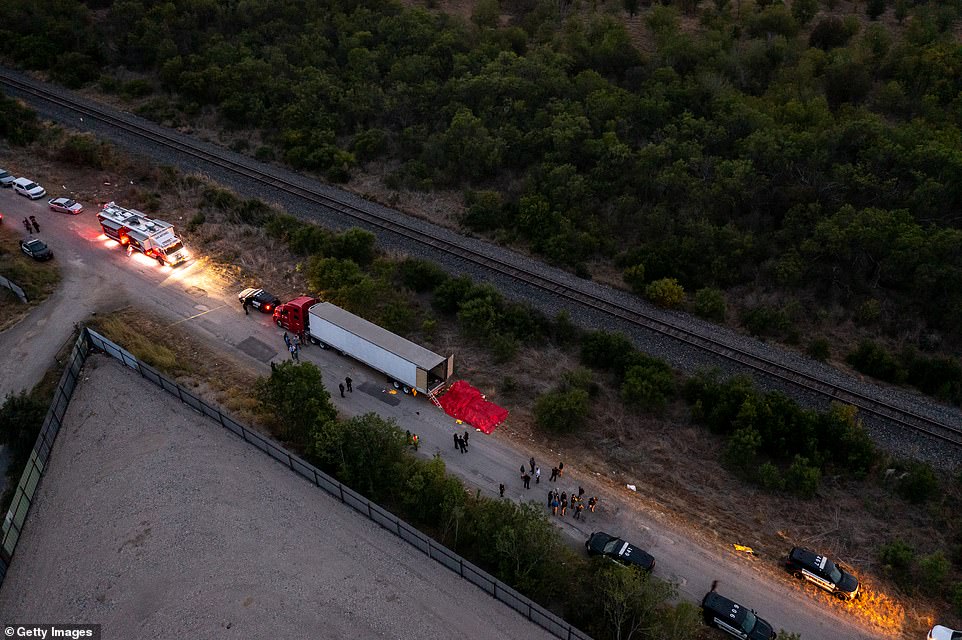 Under the direction of President Joe Biden, migrant crossings, rescues, and fatalities along the southern border have reached historic highs.

As thousands of migrants attempt to cross the border from South and Central America through Mexico, U.S. Customs and Border Protection (CBP) is on track to make over 2 million arrests this year.

Since Biden assumed office, there have been more migrants crossing the border, with Border Patrol recording a record 1.73 million border arrests in 2021.

Death events have also increased dramatically, with the number of documented migrant deaths in 2021 more than tripling those in 2020.

The’multi-billion dollar illegal smuggling industry,’ according to Biden, preys on migrants and results in ‘far too many innocent lives,’ and as such, authorities need to take action.

After officials discovered at least 50 dead migrants in an abandoned tractor-trailer in San Antonio, Texas, on Monday, the president made a push to address the border situation.

The incident is the deadliest human smuggling occurrence to occur on American soil since 2003, when 19 migrants perished while traveling from South Texas to Houston on the back of a hot 18-wheeler.

According to CBP figures released earlier this month, immigration arrests reached their highest ever levels in May 2022.

Last month, agents made 239,416 arrests near the border, which is a two percent rise from the figures from April. According to the agency, it is geared up for a potential rise in migration levels.

Compared to the data documented in prior years, the number of death situations along the southern border more than doubled last year.

According to the International Organization for Migration, which records migrant deaths, there were allegedly more than 650 fatal border crossing incidents in 2021.

Although CBP has not yet released a death toll for 2022, collected evidence indicates that at least 87 migrants have lost their lives trying to enter the United States.

Additionally, CBP disclosed that the number of rescues that have already crossed the southern border in 2022 is higher than the number that was observed in 2021.

In the seven months leading up to May, agents have carried out 14,278 “search-and-rescue missions” since October.

According to the most recent CBP data, a sizable portion of the migrants are from Mexico, Central America, Cuba, and Haiti. A significant number of immigrants are also coming from nations outside the Western Hemisphere, including Turkey, India, Russia, and others.

After the terrorist attacks of September 11, 2001, crossings became substantially more challenging. As a result, migrants are frequently led over more hazardous terrain and pay smugglers thousands of dollars more.

The bloodiest case of carrying individuals illegally across the southern border in recent memory occurred on Monday in the United States.

In San Antonio, Texas, at least 50 individuals lost their lives after being abandoned in a tractor-trailer.

In the truck that was abandoned close to Interstate 35, which runs to the Mexican border, firefighters discovered “stacks of bodies.”

According to The Texas Tribune, the migrants had steak spice rubbed on them in an apparent attempt to mask their odor while being transported.

Fourteen survivors, including four kids, were sent to nearby hospitals for treatment of heat exhaustion and heat stroke.

According to law enforcement sources who spoke with The New York Times, at least three victims were discovered dispersed down the road, with the farthest one being recovered about 75 yards from the truck.

Prior to the trailer being abandoned Monday by human traffickers adjacent to train tracks in San Antonio’s southern suburbs, police believe individuals may have jumped or fallen from it.

According to officials, it’s also plausible that the people recovered by the roadside perished inside the vehicle but fell outside when the doors opened.

Authorities claim they are not certain they have located every person from the vehicle and they are unsure of the exact number. Crews are looking for bodies in the neighboring fields and attempting to figure out if anyone made it out of the trailer alive.

Officials assert that there were no evidence of water in the semi despite the fact that temperatures on Monday reached a high of 103 degrees.

For migrants trying to cross the border, the heat is a big threat, and vehicle interior temperatures can increase significantly.

Ten migrants perished in a truck that was parked at a San Antonio Walmart in 2017 after being trapped inside. 2003 saw the discovery of 19 migrants in a hot truck southeast of San Antonio.

During the early 1990s, when San Diego and El Paso, Texas, were the primary crossing points for illegal immigrants, there was a sharp increase in U.S. border enforcement there.

Before then, individuals paid tiny amounts to mom-and-pop business owners to transport them across a border that was mostly unsecured.

The deaths of immigrants who were riding in the back of a tractor-trailer in Texas on Tuesday were described as “horrifying and devastating” by Biden.

Initial reports indicate that this tragedy was caused by smugglers or human traffickers who have no regard for the lives they endanger and exploit to make money, he said in a statement.

“While we are still learning all the facts about what happened and the Department of Homeland Security has the lead for the investigation,” he added.

He said the incident “underscores” the importance of stopping border crossings for people smugglers.

“My administration will continue to do everything possible to stop human smugglers and traffickers from taking advantage of people who are trying to enter the United States between ports of entry,” he said.

“Exploiting vulnerable individuals for profit is shameful, as is political grandstanding around tragedy.”

“My Administration will continue to do everything necessary to prevent human smugglers and traffickers from profiting off of people who are trying to enter the United States between ports of entry,” the statement reads.

The incident was quickly used to launch political criticism of the Biden administration.

These fatalities are Biden’s fault, Hours after the bodies were found, Abbott tweeted, “They are a product of his deadly open border policy.” “They demonstrate the fatal results of his failure to uphold the law.”

Biden was traveling on Air Force One between summits in Germany and Spain when White House press secretary Karine Jean-Pierre told reporters that the administration was concentrating on the victims and keeping human smugglers accountable.

The border is actually blocked, which contributes to the fact that individuals are attempting to smuggle themselves across it, she said.

Those who sadly lost their lives, their loved ones, and those who are still fighting for their lives are all in our thoughts and prayers. Additionally, we appreciate the quick work of the federal, state, and local first responders.