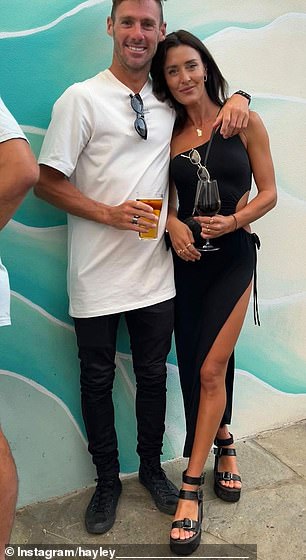 Clint Kimmins, 38, is pictured with his girlfriend, Hayley.

A former Bondi Rescue star who was only 22 years old when he was imprisoned for glassing a drug dealer in self-defense has opened up about his ordeal in prison.

Clint Kimmins, now 38 years old, believed he had the world at his feet as a teenager on the Gold Coast when he was selected to compete in junior surfing titles in Hawaii and Bali despite having grown up in an awful home with alcoholic parents.

He dropped out of high school in the tenth grade and was sponsored by the Australian surfing brand Rip Curl. He subsequently won junior titles and pledged to continue competing until he was good enough to join the World Surf League.

In 2004, during a confrontation at a 21st birthday party at a local surf club, he grabbed a glass bottle to defend himself and ended up stabbing a man in the neck. His dream came crashing down.

The victim survived, but two years later, the aspiring surf star was convicted of unlawful wounding and sentenced to 18 months in a maximum security prison with six months of no parole.

Kimmins told the Good Humans podcast on Friday that he spent his first week in prison sitting in the cold and staring at the blood on the walls, unaware of the date.

“I recall sitting in my suit in the dark and cold holding cell beneath the court,” he added.

Then it came time to disrobe, place my things in a bag, and don prison browns; however, the clothes stank and had holes; the shirt was undersized and the pants were large.

Kimmins stated that he was warned by cell officials not to reveal his real name, not to reveal the reason for his arrest, and to make it apparent that he had no narcotics, all of which he complied with until his face appeared on the evening news.

He told the podcast that the holding cell was the toughest part of his jail sentence because he had no idea what time it was for two months because it was constantly dark and cold.

He stated, “There was blood on the walls and fingernail scratches on the paint.”

People were removing paint from the walls, rolling it in cardboard toilet paper rolls, and smoking it, and the odor…

He did make a friend who had previously been incarcerated and given him guidance on what to do; he was instructed not to exhibit emotion and not to call the guards “mate.”

Until last year, Kimmins was a lifeguard on the reality television show Bondi Rescue (pictured).

Kimmins (pictured) is currently a world-traveling triathlete who competes in competitions such as Iron Man.

Instead of expressing how badly he was hurting, he urgently sought to suppress his emotions.

“I desired to leave my body.” He stated, “I wanted to get on with it.”

When he was ultimately moved from the holding cell to a maximum security jail, he was handcuffed and placed in a small box in the back of a van with one tiny vent; his knees were crushed into the legs of another prisoner.

Kimmins was tested for HIV and hepatitis B upon his arrival, given a psychological evaluation to determine if he was suicidal, and asked if he feared for his life behind prison and if he desired protection.

His acquaintance from the holding cell advised him not to admit to any anxieties or ask for protection, since persons in those cells are frequently pedophiles who have a difficult time in jail.

A mental health patient with ‘bandages and scratches’ approached him at the medical facility as he was being evaluated.

The worst part of Kimmins’s sentence, according to him, was being held in a holding cell under the court.

He was saying, “You’re young and adorable.” I joked with him and played along, but it forces you to mature quickly,’ he said.

‘Eventually, I was placed in a cell with a young man who was addicted to drugs. He was lying down and smoking, but he offered me some Tim Tams and we had a pleasant conversation. I recall how peaceful it was.

The first morning he spent in jail, he awoke and saw the acquaintance he met in the holding cell.

I approached him and asked, “how are ya?” And he shrugged me off, and he was standing with heavy-looking guys, and he came up to me afterwards and said, “don’t you ever show that kind of emotion again”

He was upset with me, but he was also assisting me.

Kimmins desired to spend his time constructively while being incarcerated and unable to surf. He began reading literature, learning how to combat his nervousness, and exercising.

The prison lacked normal gym equipment – there were no free weights for safety reasons – so he exchanged some canola oil for a pair of Puma joggers and began running around the oval.

In addition to touch football and tennis, he finally became renowned as “the kid who trained.”

“I entered the gym at 84 kilograms, and all of a sudden I had six packs and abs,” he stated.

When Kimmins (shown) was released from prison, he realized how terrible it had been and laid down without fear.

This was the beginning of my adventure as a triathlete who competes across the world: I observed an improvement in my mental health and became addicted to the training.

Kimmins stated that his final weeks in prison were the most difficult since he did not know when he would be released, and the wait was excruciating.

Another inmate approached him and warned him to stop being so rude to individuals serving life sentences or penalties of several years.

When he was freed from prison, his ex-girlfriend Carly picked him up in her new Commodore, which he imagined was a spaceship.

He remarked, “I hadn’t been in a car for six months, and I realized what I had put her through.”

“I wanted to pay her back, lay down with her, and feel safe, and that’s when I realized how treacherous and dangerous it is in there,” she said.

After his first night outside of prison, he awoke at 3 a.m. and ran under the stars, thinking, “I’m free.”

He remarked, “I ate breakfast and felt so grateful and inspired for the rest of my life.”

Kimmins was terrified of returning to prison and avoided entering bars for years after his release. Whenever there was a problem at a venue, he would frequently just leave.

He thought, “I wanted to make it the best thing that ever happened to me; what if I won the world championship?”

When his appeal was denied, he was dropped by Rip Curl, but he found a stronger sponsorship agreement with Oakley and eventually traveled the world surfing for Red Bull.

He returned to the Gold Coast, where he competes in Iron Man and surf events.