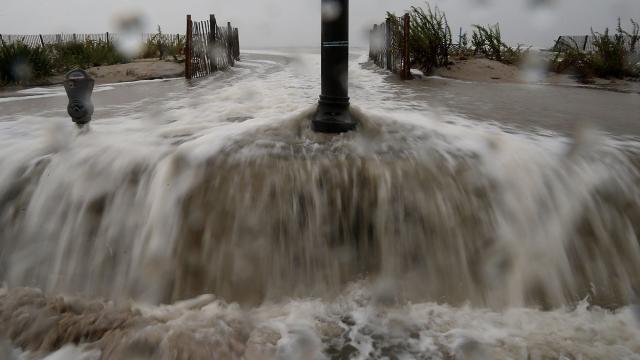 As a soon-to-be bomb cyclone hits the Northeast, areas of the Eastern Seaboard will likely experience one of the worst significant coastal flooding occurrences on record, comparable to Superstorm Sandy.

This is due to the absence of blizzard conditions on the warm side of the deadly winter storm that is pummeling the Midwest and Great Lakes and spreading toward the East Coast ahead of the Christmas holiday weekend.

The FOX Forecast Center predicts wind-driven rain in the Northeast on Friday as strong winds whip the region with widespread gusts of 50 mph or more.

In addition, gusts of 60 to 70 mph cannot be ruled out with the passage of the arctic cold front Friday night into Saturday morning.

At least a few sporadic power outages are probable, and major disruptions are also possible.

On the south side of Long Island, the Jersey Shore, and the Connecticut coast, flood levels are expected to rank among the top 10, and in some cases the top 5, on record.

Rapidly falling temperatures will rapidly freeze any remaining water on the roads, creating hazardous driving conditions from Friday evening through at least Saturday.

Ten years ago, on October 29, 2012, Superstorm Sandy made landfall at Atlantic City, New Jersey, killing more than 100 people and causing billions of dollars in damage.

Sandy’s core struck the New York City tri-state area and the Jersey Shore, but its effects were felt thousands of miles away from its epicenter.

On the north shore of Long Island, Kings Point, New York, measured a tremendous storm surge of 12.65 feet. The water level in Battery Park in Manhattan rose to approximately 14 feet.

The casino-lined boardwalk in Atlantic City, New Jersey, sustained damage when nearly 9 feet of water flooded onto the barrier island near where Sandy made impact. In addition, the renowned boardwalk in Seaside Heights, New Jersey, collapsed into the ocean due to Sandy’s severe storm surge.