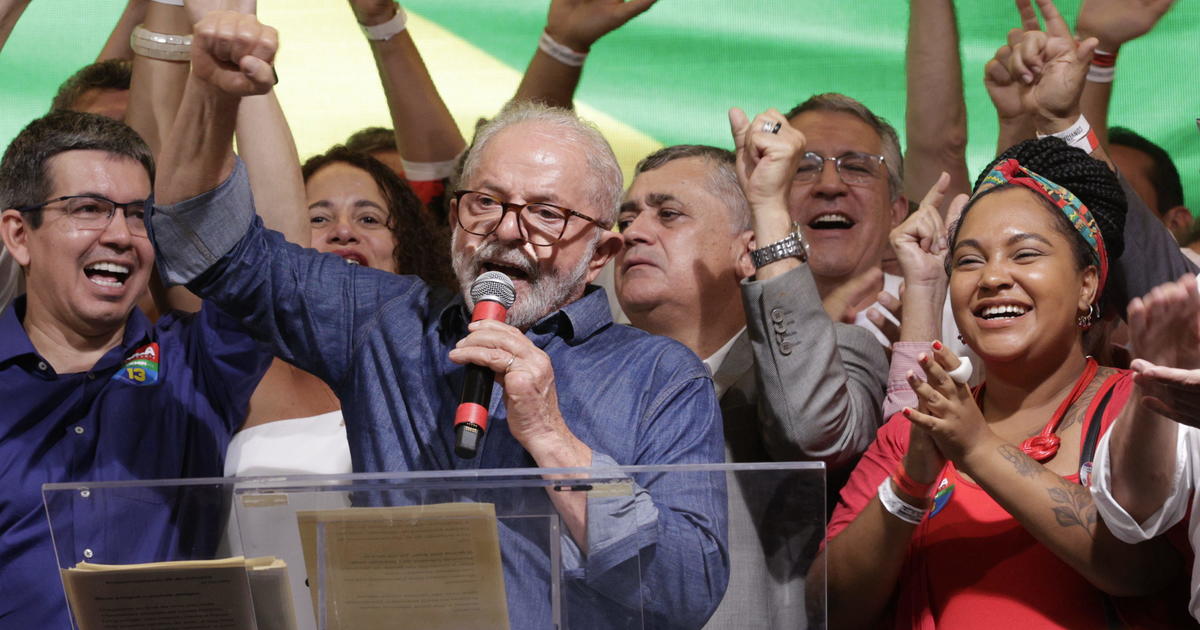 The victory represents a stunning turnaround for the charismatic but tarnished leftist heavyweight, who left office in 2010 as the most popular president in Brazilian history, fell into disgrace when he was imprisoned for 18 months on controversial corruption charges that have since been dropped, and now returns for an unprecedented third term at age 77.

After months of claiming, without evidence, that Brazil’s electronic voting system is plagued by fraud and that the courts, media, and other institutions have colluded against his far-right movement, all eyes will now be on Bolsonaro and his followers’ reactions to the result.

In his victory address in Sao Paulo, Lula stated, amid loud shouts, that “our country needs peace and harmony.”

“The problem is enormous,” he remarked, noting the global hunger crisis, the economy, fierce political conflict, and Amazon destruction.

Later, he addressed a closely packed gathering of hundreds of thousands of Workers’ Party-clad supporters who had crowded the city center, declaring, “Democracy is back.”

Bolsonaro, 67, remained mute in the hours following the announcement of the election result.

“Anywhere in the world, a defeated president would have already called to concede defeat. I am unsure if he will call and concede, as he has not yet done so “Lula addressed the enormous throng.

In Brasilia, some Bolsonaro supporters refused to recognize the election results.

“The Brazilian people will not accept a rigged election and turn our country over to a thief,” said Ruth da Silva Barbosa, a 50-year-old educator.

With more than 99.9 percent of polling stations reporting, electoral officials proclaimed Lula the winner with 50.9% of the vote over Bolsonaro’s 49.1% in the closest election since Brazil returned to democracy following its 1964-1985 dictatorship.

Bolsonaro, the virulent, extreme right called the “Tropical Trump,” is the first incumbent president in the post-dictatorship era to lose reelection.

Without a statement from Bolsonaro, his main friends emerged in public to accept the election results. Speaker of the House of Representatives Arthur Lira stated that it was time to “reach a hand to our rivals, debate, and develop bridges.”

President Joe Biden of the United States, together with the French, British, and other European leaders, as well as the Russian and Chinese governments, congratulated Lula. Latin American leaders also extended their congratulations.

On Sunday evening, Lula fans across the country exploded in jubilation.

Maria Clara, a 26-year-old student and supporter of Lula, stated at a victory celebration in downtown Rio, “We’ve endured four years of a genocidal, nasty regime.”

“Today, democracy triumphed, along with the opportunity of once more imagining a better nation.”

In Brasilia, the weeping mass of Bolsonaro supporters — dressed in green and yellow, the colors of the Brazilian flag that the ex-army captain has embraced as his own — knelt in prayer.

Bolsonaro raced to victory four years ago on a wave of discontent with politics as usual, but was criticized for his poor management of the COVID-19 outbreak — which killed more than 680,000 Brazilians — a weak economy, his controversial manner, and attacks on democratic institutions.

Regardless of how the incumbent reacts, Lula will face enormous obstacles upon his January 1 inauguration.

In the first-round elections on October 2, Bolsonaro’s far-right allies won a majority of parliamentary and gubernatorial seats and will be the dominant force in Congress.

In his victory speech, Lula addressed gender and racial equality, as well as the urgent need to address a food crisis that affects 33,1 million Brazilians.

“Today, we announce to the world that Brazil is back,” he declared, adding that the nation is “ready to recover its place in the fight against the climate disaster, particularly in the Amazon.”

He declared that he will “work for zero deforestation.”

Lula inherits a highly divided nation and a global economic scenario that is in stark contrast to the commodities “super-cycle” that allowed him to lead Latin America’s largest economy through a transformational boom in the early 2000s.

Winter told AFP that the incoming president will face a hostile Congress and a “weak government.”

For the time being, none of this mattered to jubilant Lula supporters.

“Brazil is regaining its footing after four years of darkness. There were so many problems and so much anxiety “Larissa Meneses, a software developer of 34 years old, told AFP at a jubilant victory party in Sao Paulo.

“Now that Lula has won, I believe that things will begin to improve. This is a day for much laughter.”