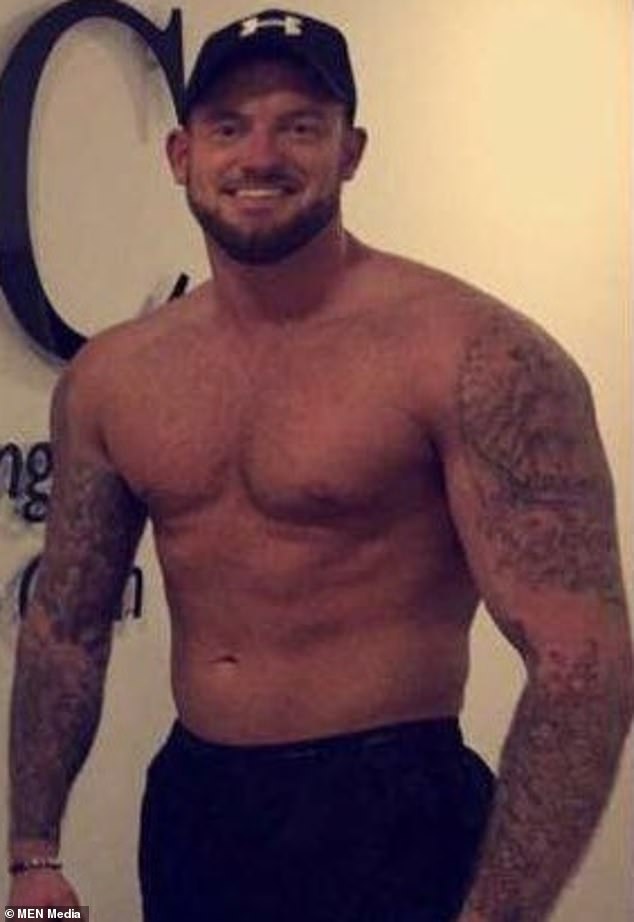 A cocaine and steroid fuelled bodybuilder who killed a ‘warm hearted’ father in an ‘out of the blue’ attack in a nightclub in Bolton, Greater Manchester, has been jailed for more than 11 years.

Robert Owen Greenhalgh, 31 – who called himself the ‘hardest c*** in the North West’ – punched Robert Smethurst, 36, hard enough to cause immediate brain trauma.

Mr Smethurst had accidentally stepped on Greenhalgh’s foot earlier that night – while celebrating his birthday with cousin Aaron Bates in Luxe Lounge on Bradshawgate – but had apologised and there were seemingly no further problems.

However later, at around 1.30am in the incident on September 2 last year, Greenhalgh without warning hit Mr Bates and then punched Mr Smethurst with the force of a ‘heavyweight boxer’, Manchester Crown Court heard.

Mr Bates was able to break his fall and suffered concussion but had no memory of the attack. Mr Smethurst was declared dead about an hour later.

After the brutal blow, Greenhalgh apparently said: ‘Who else wants some?’

The jailed bodybuilder has now been declared ‘dangerous’, and sentenced to 11 years and three months in prison.

Sentencing judge Anthony Cross QC said: ‘Not for one moment did you consider that which you had done, other than to glory in your achievement and invite others to attack you.’

Mr Smethurst’s wife Amanda, a primary school teacher, told the courtroom she was ‘robbed’ of her ‘husband, (her) best friend, (her) happiness and (her) future all in one’.

Calling Greenhalgh a ‘coward’, she added: ‘How could someone be so violent and hateful towards my husband who did absolutely nothing to deserve this attack?

‘The love for my husband is overwhelming proof of what an incredible man he is. I miss him more than words could ever describe.’

Greenhalgh, known to friends and family as Owen, has no previous convictions but a police interrogation of his phone revealed a ‘predilection’ for violence. A former debt collector, he bragged that he had ‘knocked out’ three people on one occasion.

He described himself as being ‘the hardest c*** in the North West’ and talked about punching someone while wearing a knuckleduster, prosecutor Rob Hall said.

Police were unable to trace victims relating to the phone messages, but the judge said they were relevant in declaring him a ‘dangerous offender’.

Greenhalgh also talked of using steroids to bulk up as he regularly visited the gym, and also bragged of his cocaine use.

In messages he claimed to have used £50,000’s of the class A drug in six months. His relationship had broken down and he began living in hotels and friends.

Family and friends tried to persuade him to kick his drug habit, and his mother issued a stark plea to her son in one message.

‘You are so far gone now that you don’t even know what is right and wrong anymore, and for your information only idiots do what you are doing, not nice people.

‘You lie, you cheat, you control with brute force but you will die if you don’t stop. I’m done with you I’m afraid. It’s ok but you need help.’

‘She was wrong about one thing only,’ Judge Cross said. ‘It would not be your death but the death of a wholly innocent man.’

On the night he killed Mr Smethurst, Greenhalgh had been out drinking cider and vodka and had snorted cocaine before later arriving at Luxe Lounge with his best friend.

Mr Smethurst had been dropped off at a snooker hall in Bolton by his wife, where he enjoyed a few pints with his cousin to celebrate both their birthdays.

The pair arrived at Luxe Lounge at about 11.15pm. At about 11.40pm Mr Smethurst accidentally stood on Greenhalgh’s foot, but he apologised and they left on good terms.

About 10 minutes prior to the fatal attack, there was some ‘innocent’ conversation between the two groups but no trouble was apparent.

Greenhalgh, who had been sitting in a booth at the club, then suddenly got up, clapped his hands and punched both Mr Smethurst and his cousin.

Even Greenhalgh’s friend said he was ‘totally shocked’ by what happened, as it was ‘so out of the blue’.

‘It is unsurprising not one single person including the door staff intervened, such was the terror you caused inside that club,’ Judge Cross told Greenhalgh.

Greenhalgh then drove away in his work van, despite being unfit through drink and drugs.

He was later found in a hotel in Leigh. Police discovered a syringe containing traces of testosterone and trenbolone – a steroid ordinarily used by vets to increase muscle growth and appetite in livestock – in his work van.

In an interview with officers, Greenhalgh ‘blamed’ Mr Smethurst and Mr Bates for being ‘cocky’ and claimed they had looked at him ‘funnily’, even after being shown CCTV footage which proved their innocence. He also tried to blame his actions on the alcohol and drugs he had used.

Greenhalgh was initially charged with murder but admitted manslaughter, a plea accepted by prosecutors who ruled there would be no realistic prospect of a conviction for murder.

Moving tributes were paid in court to Mr Smethurst, a company director for a firm in the aviation industry.

His 13-year-old daughter described him as being ‘warm hearted’, ‘caring’ and ‘fun’.

He loved fishing and spending time with his family. His wife said the pair dreamed of taking early retirement in France. Mr Smethurst’s parents told of their pride at their ‘beautiful’ son.

Defending, Michael Brady QC said Greenhalgh, of no fixed address, is remorseful and ashamed of his behaviour.

He described Greenhalgh’s messages about his drug use and apparent violence as ‘unpleasant boasts’.

Judge Cross sentenced Greenhalgh to 11 years and three months in jail. He will serve two-thirds of the term in prison. When released he will have to observe an added three years and nine months on licence.