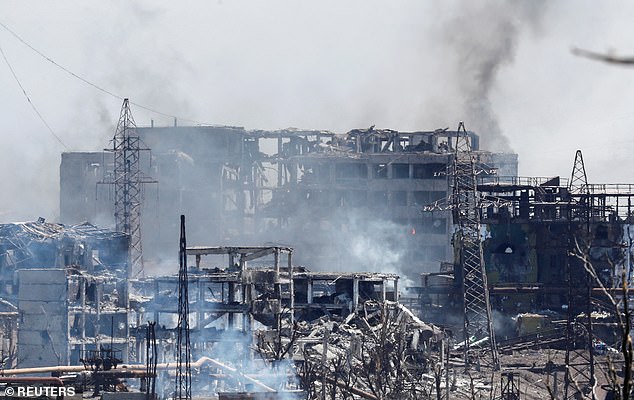 A refrigerated train filled with the bodies of Vladimir Putin’s fallen troops has been filmed in Ukraine, with gold allegedly looted from civilians found in their pockets.

The Ukrainian army gave journalists access to the carriage near Kyiv, with one colonel telling reporters that Moscow has refused to claim its own dead.

Video inside the train showed a pile of corpses in white body bags stacked at one end of the carriage. Morgue workers showed reporters that they had found gold in the pockets of the soldiers, likely looted from Ukrainian civilians.

One of the morgue workers held two military badges up to the camera, saying that it showed one of the slain soldiers had been an ‘elite paratrooper’.

Kyiv says that more than 25,000 Russian soldiers have been killed since the Russian president ordered his troops into Ukraine on February 24. The Kremlin has only acknowledged around 1,300 deaths.

Speaking to Al Jazeera, Ukrainian army colonel Volodymir Liamzin said the bodies in the train ‘will be kept as long as need be,’ saying Kyiv intends to treat the Russian dead better than they treated Ukrainian civilians.

‘The [Ukrainian] government will decide [what to do with the bodies] because Russian refuses to take them,’ he said. ‘Each body is proof of a war crime.’

Ukrainian morgue workers showed the Al Jazeera reporters golden jewellery that was found on the Russian bodies. It is thought that it was looted by the soldiers from Ukrainian civilians. Golden necklaces and rings could be seen in the small hoard.

Looting in Ukraine by Putin’s soldiers has been well documented, while prosecutors – both Ukrainian and international – are investigating hundreds of other potential war crimes carried out by Russian soldiers, including mass murder, torture and rape.

Russia troops invaded Ukraine on 24th February in what the Kremlin calls a ‘special military operation’ to ‘protect Donbass’. Today marks the 77th day of the campaign.

From 24th February to 10th May, the total combat losses of Russian troops stood at around 26,000 personnel, according to the General Staff of the Armed Forces of Ukraine.

After unexpectedly fierce resistance forced the Kremlin to abandon its effort to storm Kyiv over a month ago, Moscow’s forces have concentrated on capturing the Donbas, Ukraine’s eastern industrial region.

But the fighting there has been a back-and-forth, village-by-village slog.

Putin appeared to be preparing for a long conflict, and a Russian victory in Donbas might not end the war, U.S. Director of National Intelligence Avril Haines said Tuesday.

In the retaken villages of Staryi Saltiv and Vilkhivka near Kharkiv, Ukrainian servicemen gathered the bodies of Russian soldiers killed in the fighting, according to Reuters witnesses.

Residents found the bodies of 44 civilians under the rubble of a destroyed building in the eastern town of Izyum, which is under Russian control, Kharkiv’s governor said today. The town acts as a gateway to the Donbas region, which Russia has vowed to ‘liberate.’

Ukrainian border guards said on their Telegram channel that Russian forces were shelling the Sumy and Chernihiv regions close to the border.

In the country’s south, Ukrainian armed forces said they struck nine enemy targets, with enemy losses of 79 servicemen. Russian fire was concentrated on the Mykolaiv region bordering the Black Sea where homes, farms and power lines were damaged.

Russian forces also continued to bombard the Azovstal steelworks in the southern port of Mariupol with, Ukraine’s general staff said, trying to capture the last bastion of Ukrainian resistance in the ruined city.

Reuters was unable to independently verify the reports of fighting.

Ukraine says tens of thousands of people have been killed there during two months of Russian siege.

Russia was trying to reinforce exposed troops on Zmiinyi Island, also known as Snake Island, which became famous for the foul-mouthed defiance of Ukrainian border guards early in the invasion.

If Russia consolidated its position there it could dominate the northwestern Black Sea, Britain’s Ministry of Defence said in a regular bulletin.

Russia’s resupply vessels have minimum protection in the western Black Sea, after the Russian navy’s retreat to Crimea following the loss of the flagship Moskva, it said.