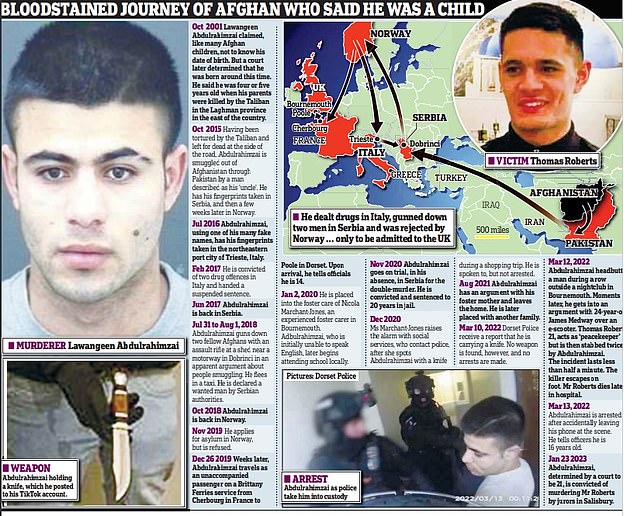 He was the drug-dealing double killer whose violent record eluded Home Office and Border Force investigators on Christmas Day 2019 when he claimed asylum.

But less than two years after landing in Poole, Dorset under the guise of a 14-year-old child, ‘knife-obsessed’ Lawangeen Abdulrahimzai added innocent Thomas Roberts to his dead count by murdering him in cold blood.

In March of last year, the 21-year-old Afghan national fatally stabbed the aspiring Royal Marine after an argument over an e-scooter in the center of Bournemouth.

And on Monday, following a trial at Salisbury Crown Court, Abdulrahimzai was found guilty of murder, revealing his bloodstained trip from Afghanistan to Bournemouth.

The bloodstained voyage of 21-year-old triple murderer Lawangeen Abdulrahimzai from Afghanistan to Bournemouth, Dorset is exposed.

The Afghan national was charged with murdering 21-year-old aspiring Royal Marine Thomas Roberts (above) at a Subway sandwich store in Bournemouth on March 12, 2017, after stabbing him twice in the chest with a 10-centimeter blade.

In a shocking revelation, the court heard that Abdulrahimzai was given a 20-year prison sentence in his absence for brutally murdering two fellow Afghans in Serbia in 2018 using an AK-47 assault rifle.

Earlier, the court heard that when Abdulrahimzai was 15 years old, he was tortured and left for dead by the Taliban, who had previously murdered his parents when he was four or five years old.

Now Abdulrahimzai’s path can be disclosed.

October 2001: Lawangeen Abdulrahimzai claimed, like many Afghan children, not to know his date of birth. However, a court eventually concluded that he was born around this period – just weeks after Osama bin Laden, the leader of Al-Qaeda, orchestrated the 9/11 terrorist strikes on the United States.

Abdulrahimzai stated he was four or five years old when the Taliban murdered his parents in the eastern district of Laghman.

After being tortured by the Taliban and left for dead on the side of the road in October 2015, Abdulrahimzai is smuggled out of Afghanistan via Pakistan by a man referred to as his “uncle.” His fingerprints are obtained in Serbia and again in Norway a few weeks later.

Police released a photograph of 21-year-old murder offender Lawangeen Abdulrahimzai after his conviction.

Under one of his several aliases, Abdulrahimzai gets his fingerprints taken in the Italian port city of Trieste in July 2016.

In February of 2017, he is found guilty of two drug-related offenses in Italy and given a suspended sentence.

Jun 2017: Abdulrahimzai is back in Serbia.

Abdulrahimzai shoots and kills two other Afghans with an assault rifle at a shed along a freeway in Dobrinci on July 31 and August 1, 2018 in an apparent dispute over human smuggling. He takes off in a taxi. He is listed as a wanted individual by Serbian authorities.

Abdulrahimzai is back in Norway in October 2018.

He asks for asylum in Norway in November 2019 but is denied.

Abdulrahimzai (center with black hood) was captured on camera headbutting a partygoer moments before killing an aspiring Royal Marine over an e-scooter.

Mr. Medway pursues Abdulrahimzai (circled in white) as he flees on foot in yesterday’s leaked CCTV footage (circled in yellow)

A few weeks later, on December 26, 2019, Abdulrahimzai travels alone on a Brittany Ferries service from Cherbourg, France, to Poole, Dorset. On arrival, he informs officials that he is 14, despite the fact that he is believed to be roughly 19 years old.

He is placed in the care of Nicola Marchant-Jones, an experienced foster parent in Bournemouth, on January 2, 2020. Adbulrahimzai, who initially cannot speak English, eventually begins attending a nearby school, where he ‘terrified’ young ladies by sending them indecent selfies and assaulted young males.

In absentia, Abdulrahimzai is tried in Serbia for the double-murder in November 2020. He is found guilty and condemned to twenty years in prison.

After spotting Abdulrahimzai with a knife during a shopping trip in December 2020, Ms. Marchant-Jones contacts social services, who then notify the police. He is questioned, but he is not arrested.

Abdulrahimzai has an altercation with his foster mother in August 2021 and then leaves the home. Later, he is placed with a new family.

The Dorset Police receive information that he is carrying a weapon on March 10, 2022. However, no weapons are discovered and no arrests are made.

Armed police are depicted arresting the Afghan national, whose identity as a triple murderer has now been exposed.

Abdulrahimzai headbutts a man during an altercation outside a Bournemouth nightclub on March 12, 2022. Moments later, he engages 24-year-old James Medway in a dispute over an e-scooter. Abdulrahimzai stabs Thomas Roberts, age 21, twice after he serves as a “peacekeeper.” The occurrence lasts for less than thirty seconds. The perpetrator flees on foot. Mr. Roberts, an aspiring Royal Marine, dies later in hospital.

Abdulrahimzai gets arrested on March 13, 2022, after leaving his phone behind by accident. Officers are informed that he is 16 years old.

Abdulrahimzai, confirmed by a court to be 21 years old, is convicted of murdering Mr. Roberts on January 23, 2023.

Wednesday, Abdulrahimzai will be sentenced for the murder of Mr. Roberts.