Skip to content
Home » News » News » Blizzard warnings have been issued for Victoria’s Alpine areas for the coming week. 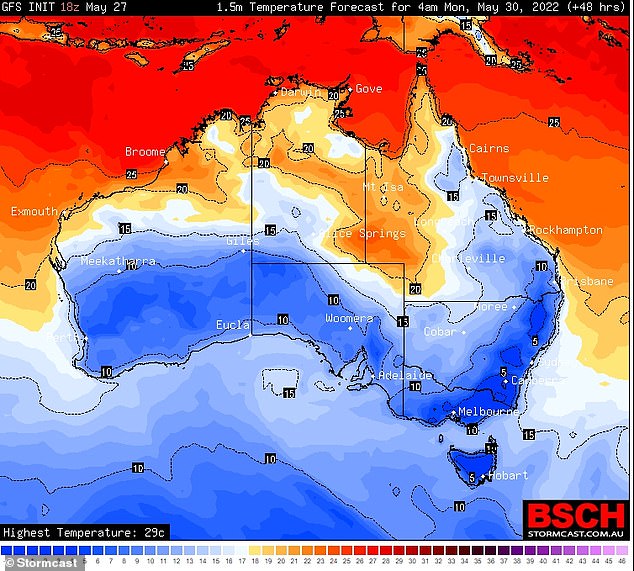 Melburnians have been advised to get out their winter jackets, as Monday is expected to be the coldest day of the year.

Snow flurries could possible reach regions as low as 700m on Tuesday, meaning the Grampians, Mt Macedon and Mt Dandenong may see some winter magic early in the season.

Unfortunately the snow is forecast to coincide with strong winds, leading to blizzard conditions.

Drivers in alpine regions have been warned to remain vigilant due to possible hazardous driving conditions.

The Bureau of Meteorology has predicted the east of Australia could see above average rainfall this winter.

Some regions in Queensland and New South Wales are now expected to be wetter than 80 per cent of previously recorded winters.

However Bureau of Meteorology head of long-range forecasts, Andrew Watkins, told the Herald Sun Melbourne would likely avoid a lot of the rain and stay slightly warmer.

‘It’s looking like a wetter than average winter in Victoria, with particularly high odds of getting above-normal rainfall across northern Victoria,’ he said.

‘But some places closer to the coast, as you get down on to the southwest coast in particular … are not likely to get the above-average rainfall.

Parts of northern Victoria might be cooler than normal, but in the south and particularly in the coastal regions, possibly including Melbourne, it could actually be slightly warmer than normal, particularly with warm ocean temperatures offshore as well.’

Unfortunately Sydneysiders won’t be so warm with minimum temperatures forecast to sit between 8C and 10C next week.

However the city will see some of the forecast winter rain on Monday before clearing later in the week.

The Sunshine State will stay slightly warmer this week with Brisbane forecast for a minimum temperature of 12C on Monday and a maximum of 23C.

Hobart and Canberra can expect to feel the chill this week with both cities forecast for a minimum of 4C next week.

Perth is set to see a warmer week despite cloudy weather blocking the sunshine with minimum temperatures staying just below 10C and maximums reaching the high teens and 20C.