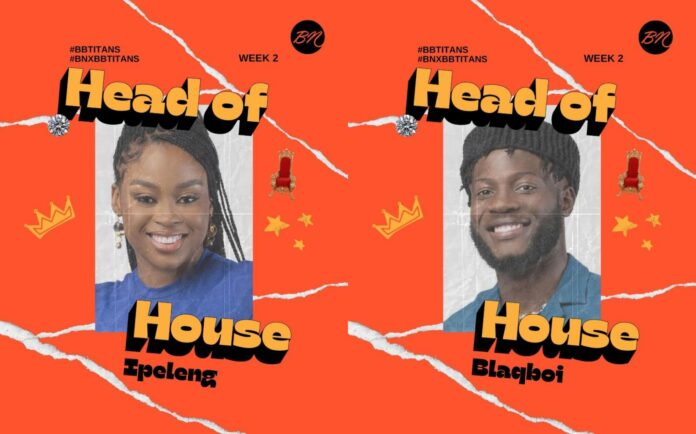 To ratchet up the cliques and rivalries in the Big Brother Titans house during the second week, housemates had to create pairs. Blaqboi and Ipeleng won the Head of House competition and are in control of the house this week.

Housemates were required to select a card bearing the name of a person of the opposite gender and nationality. The card contained the name of the housemate with whom they will be paired throughout the season and compete for the HoH privilege.

During the first round, male roommates played the game “junk in the trunk” by shaking ping-pong balls out of a tissue box put at their waists. Their spouses then competed in the viral wine glass race utilizing a roll of toilet paper and a wine glass to pull the glass towards them as quickly and as easily as possible.

In the second round, Blaqleng competed against Khosi & Miracle OP (Khosicle) by juggling balloons in the air while adhering to two simple rules: keep all four balloons afloat at the same time while remaining in the designated square; the pair that held all balloons aloft for the longest period of time won the competition.

Nelisa and Yemi Cregx (Yelisa) were announced as this week’s Tails and instructed to carry a whiteboard for the duration of the week. Before speaking, they must write on the whiteboard everything they need to discuss with their housemates. To avoid punishment, they must copy exactly what has been put on the board, without adding or removing any words.

During an emotional nomination process, following the first nomination of Yelisa, Santheo, Juvone, and Ebubu & Tsatsii (Royals), Blaqleng utilized their veto authority to save the Royals by replacing them with Juiovla.

»Blaqboi and Ipeleng became the head of house for ‘BBTitans’«